Area BID seeks to support businesses on strip between 32nd and 60th streets. 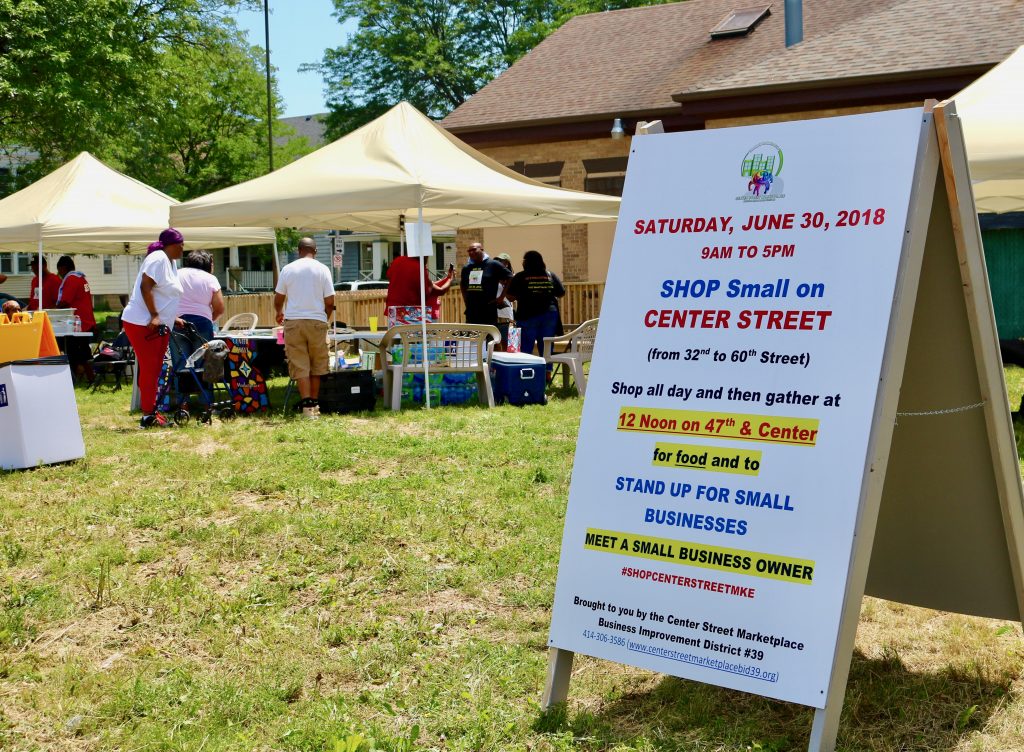 For a two-mile-long block party, Center Street was pretty quiet. Temperatures reaching the upper 90s kept most business owners in the cool confines of their air-conditioned shops while customers single-mindedly conducted business and left. It seemed nobody wanted to linger on the sun-drenched sidewalks, except for a group of about 20 people grilling hot dogs and socializing near the Sherman Park Rising mural, mopping rivers of sweat from their faces.

“I want people to know that Center Street is back on the rise,” said Ald. Russell Stamper, who was among those braving the heat to attend the neighborhood event, Shop Small on Center Street.

Known for its abundance of hair salons, barbershops and convenience stores, the commercial corridor on Center between 32nd and 60th streets has encountered vacant buildings and a high crime rate in recent years, hurting local businesses and the neighborhood.

But BID 39 and city officials are committed to helping businesses flourish and inspiring new owners to open shops on the corridor. The goal of the event was to provide a marketing opportunity for local businesses and to encourage local shopping. 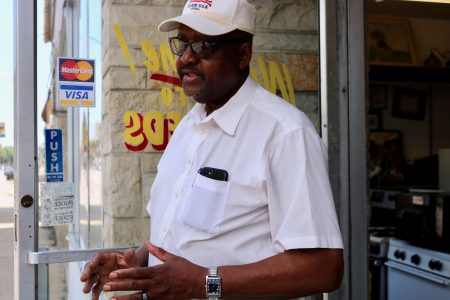 Business owner Jesse Reed said that younger generations don’t frequent small businesses as much as their parents and grandparents did. Photo by Sophie Bolich.

“Making sure that the dollar stays in the community and supporting the neighborhood is very important,” said BID 39 Executive Director Jennifer Potts. “We have to bring some new life and get people interested.”

Added Stamper, “We’re trying to promote retail, manufacturing, innovation, technology, all types of small businesses because entrepreneurship is how we’re going to bring back our neighborhoods.”

Though every Business Improvement District in the city suffered budget cuts this year, BID 39 took the hardest hit, facing 40 percent cuts due to low property values, according to Potts. This limited the board’s options for driving business.

This was the first Shop Small event, but the district hosted a speaker series in 2017 with information on business vision, social media usage, marketing and financial literacy to help businesses.

Potts said the event has a lot of support, but she wants to “build some trajectory” for organizing a bigger event next year. Her vision is an annual festival, Center Street Days, with music, vendors and lots of people.

“I want people to realize that there is a value to shopping locally. Because when you support a local, small business, you support a family,” she said.

BID 39’s annual report states that a “negative perception of crime and safety” in the area may deter potential shoppers. To counter that, the district issued packets to each business with safety tips. The Milwaukee Police Department also hosted a safety session for residents in 2017.

“We’re out here letting everybody know that we’re a part of the community as well,” said MPD District 7 Police Captain Willie Murphy. “Something we’re always concerned about is reducing that fear of crime in the neighborhood.”

He added that Shop Small is a good opportunity for business owners to come together, so that they can “look out for the neighborhood and become aware of the young folk in the area, and maybe even reach out to some of them to provide resources.”

Jesse Reed, the owner of Reed’s Furniture and Antiques, 4909 W. Center St., said that business decreased when “the neighborhood changed,” meaning the older residents died or moved away.

“You’ve got a whole new generation and they’re different,” he said. “Everybody now wants to go to the mall. That’s what hurts the street.”

Reed has been an entrepreneur in Milwaukee for more than 65 years. He always adapted to make it through tough times, but said he relies on the success of Shop Small on Center Street now more than ever.