In its non-decision decision on the Wisconsin gerrymander, the US Supreme Court once again succeeded in punting on whether it is constitutional for political parties to entrench themselves in power. The court’s opinion by Chief Justice John Roberts never got to the substance of the issue. Instead, the justices sent the case back to the three-judge district panel with instructions to explore whether the challengers have the “standing” to challenge the law.

The Chief Justice’s decision has three parts. All nine justices joined the first two parts. The very short third part, sending the case back to the district court panel, is rejected by two justices. Justices Clarence Thomas and Neil Gorsuch “would have remanded this case with instructions to dismiss.” The fact that no other justice joined Thomas and Gorsuch in wanting to dismiss the case outright may be a hopeful sign. In an earlier gerrymandering case (“Vieth”), four justices joined in an opinion that, had one more justice joined in, would have put the court on record as declaring gerrymanders immune to challenge.

The question of standing to challenge the Wisconsin gerrymander is somewhat strange. It is not enough for the challengers to show that the gerrymander is bad for our democracy. They must show that it affects them personally.

In this case the challenge was brought by a group of Democrats who argued that the gerrymander affected them especially badly by diluting their vote. The circuit court agreed that “The concern here … is the effect of a statewide districting map on the ability of Democrats to translate their votes into seats. The harm is the result of the entire map, not simply the configuration of a particular district. It follows, therefore, that an individual Democrat has standing to assert a challenge to the statewide map.”

The Supreme Court disagreed with the circuit court, concluding that the plaintiffs had not shown that they were especially harmed by the gerrymander. Rather than looking at the harm caused by weakening the ability of Democrats to translate votes into policy, Justice Roberts concentrates on the harm to those residing in districts which were “packed” or “cracked.”

In a gerrymander like Wisconsin’s, the party doing the gerrymander packs as many of the other party’s voters as possible into a relatively small number of districts. This allows it to add enough of its own voters to other districts to give it comfortable majorities.

The next two charts show cracking and packing under the Wisconsin gerrymander. To estimate the relative strength of each party in each assembly district, I used the 2008 and 2012 presidential vote in each district with the Republican vote adjusted upward (and the Democratic vote downward) such that the overall vote statewide was tied. Using the presidential vote, rather than that for Assembly candidates addressed several issues:

The next graph is aimed at identifying districts that were packed by the Wisconsin gerrymander. The horizontal axis shows the percentage of the adjusted vote for Obama in 2008; the vertical shows the Obama percentage in 2012 after the gerrymander. Districts above the diagonal line received more Democratic votes in 2012 than 2008. All but four did so. 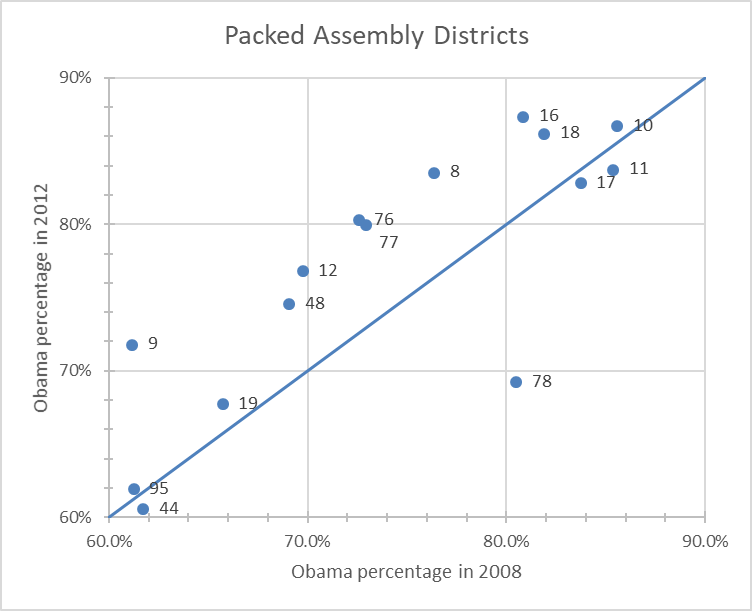 The next graph shows cracked assembly districts, the 13 districts that were flipped from Democratic to Republican by the gerrymander. For example, in district 61 the Democrat ran unopposed in 2008; in 2012 a Republican won the seat.

District 22 included parts of Ozaukee and Milwaukee counties. In 2008 a Democrat won. Then most of Milwaukee was stripped out, leaving only River Hills; in 2012 no Democrat bothered to run. 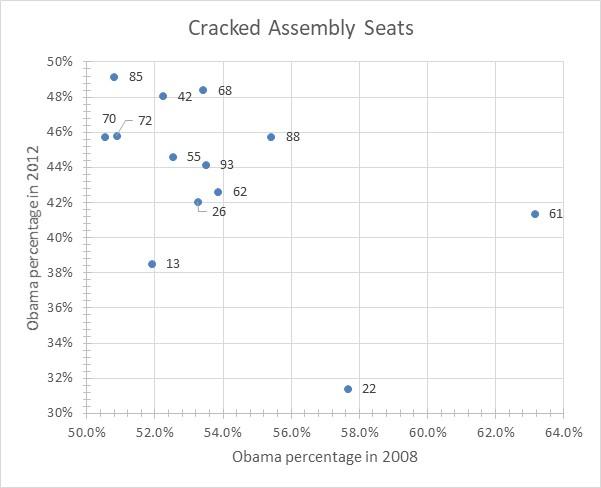 The Wisconsin gerrymander has led to a decrease of political competition in Wisconsin. The next chart shows the numbers of assembly districts where both parties fielded a candidate (in green) and where one party did, in blue for Democrats and red for Republicans. In the most recent election only 50 of the 99 seats were contested. It appears that the 2012 election results taught potential Democratic candidates a lesson about the futility of running in the districts that had been made safe for Republicans. 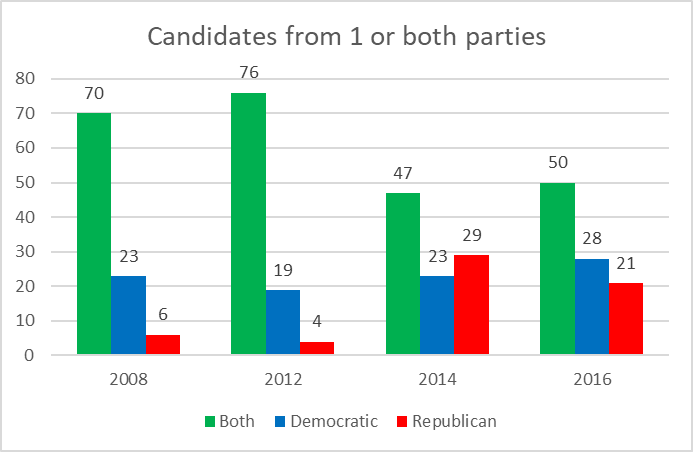 Candidates from 1 or both parties

The next chart shows the number of districts that could be classified as competitive, safely Republican, or safely Democratic before and after the gerrymander, based on the adjusted president results. Competitive districts were defined in which the winner received 54% or less of the two-candidate vote. 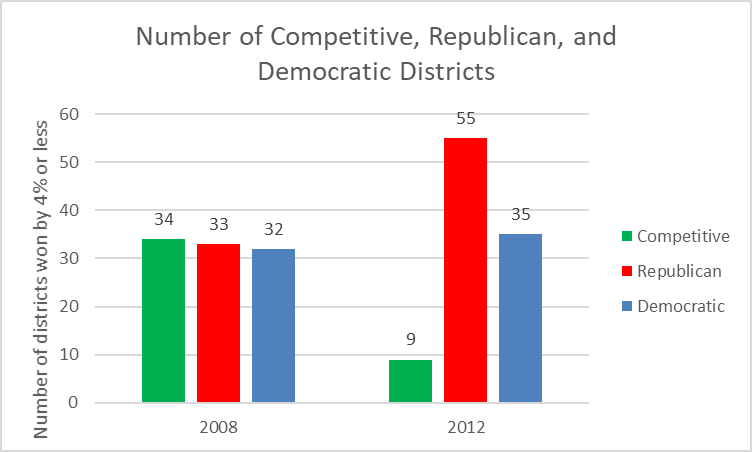 There were far fewer seats in play following the gerrymander than before. Republicans were the main beneficiaries of the decrease in competitive seats.

In a recent editorial the Journal-Sentinel expressed the hope that the legislature could be convinced to establish a non-partisan redistricting process. Such a hope seems naïve. It is clear from the graph above that this would result in many legislators—particularly Republican legislators—losing their jobs. There are few other activities in which the conflict of interest is so extreme as when legislators map their own district lines.

The next graph shows the makeup of the Wisconsin Assembly by whether the members faced a challenge from the other party in the 2016 election. Not only were Democrats in a distinct minority, but few of them had the experience of debating with a Republican opponent. 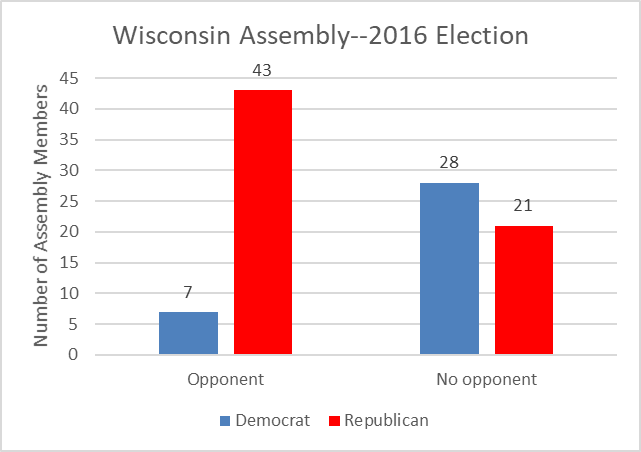 However, let’s assume that Chief Justice Roberts is sincere in his expressed desire to hear from voters in cracked and packed districts. As he wrote: “In this gerrymandering context that burden arises through a voter’s placement in a ‘cracked’ or ‘packed’ district.”

The fact that the designers of the Wisconsin gerrymander started with the existing districts and cracked or packed them makes it easy to identify who lives in those districts. Justice Elena Kagan gives two reasons those voters are harmed: “When a voter resides in a packed district, her preferred candidate will win no matter what; when a voter lives in a cracked district, her chosen candidate stands no chance of prevailing.”

Justice Kagan also suggests a second possible route to standing, emphasizing the burdens the gerrymander places on the First Amendment right to associate. “The plaintiffs joining in this suit do not include the State Democratic Party (or any related statewide organization),” she wrote. “They did not emphasize their membership in that party, or their activities supporting it.”

Whether either approach to establishing standing would convince a majority on the court remains to be seen.