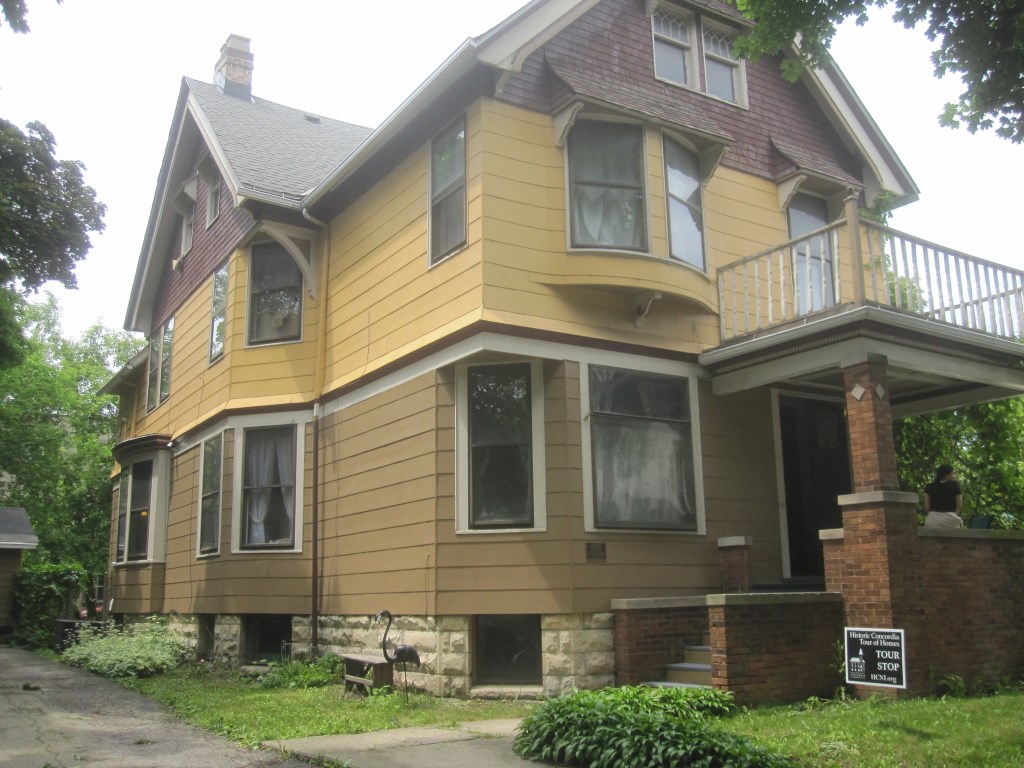 In 1894, lumber dealer Oswald Ulbricht, his wife Augusta Buestrin Ulbricht and their nine-year old daughter Elsa Emile Ulbricht prepared to move into this frame house. It was a relatively modest commission for the architects, Ferry & Clas, especially compared to the Pabst Mansion, which the firm had completed just two years before a few blocks to the east. But then, what wouldn’t be?

Young Elsa showed a talent for art, and trained at the Milwaukee Normal School as a teacher, furthering her studies at the Pratt Institute in New York, graduating in 1911. She then joined the faculty of her alma mater, retiring in 1955 from what was then to be known as UW-Milwaukee as founder and chairman of the Art Department. She was involved with the Milwaukee Art Institute and artists’ societies, and spent her summers in the Ox-Bow School of Art in Saugatuck, Michigan. She influenced a generation of Milwaukee art teachers.

Elsa Ulbricht was to live in this home until her death at 95 in 1980. During that time the Concordia Neighborhood underwent great changes, as the homes of the wealthy were turned into rooming houses — or worse. Many large mansions were razed and replaced with apartments, and misguided urban renewal projects obliterated blocks and blocks of housing and commercial activities in the area.

Yet, the Historic Concordia Neighborhood is in a period of rebound, albeit one that has taken over a generation to accomplish. Land values are on the increase, as is the percentage of home owners in the area. This home was among those featured on the 28th annual Historic Concordia Neighborhood House Tour, Saturday, June 16th. This year the tour featured artists, past and present. A companion exhibition, “A Perfect Thrill: Elsa Ulbricht and the Milwaukee Handicraft Project,” runs until August 5th at the Marquette University Haggerty Museum of Art.

Between 1929 and 1933 Milwaukee’s unemployment increased 75 percent. The Roosevelt administration’s New Deal program included controversial “make-work” projects to provide income for the unemployed. Ulbricht used her administrative skills to certify a Milwaukee Handicraft Project with the federal government’s Works Progress Administration, providing income from $55 to $94 per month for participants. She would ultimately hire 5,000 unskilled workers — many of them women — to fabricate useful items. To comply with federal standards, she made sure that the projects like textiles and wall coverings were labor-intensive. She hired graduates who could not find work as instructors. To get around regulations forbidding competition with private enterprise, she arranged to have her workshop’s output sold to public institutions like libraries, schools and hospitals. Since the project required 25 percent funding from an outside source, she arranged to partner with the Normal School.

Milwaukee the Only Integrated WPA Project

Early on in the project, officials prepared a list of over 300 African American women to participate in the project. The plan was to create a separate, segregated workplace for the unemployed black women. Ulbricht refused, and insisted that all participants, regardless of race or background, be treated equally and work in mixed company. Milwaukee’s was the only integrated WPA project. Eventually, the program made dolls for children in hospitals who had no playthings. Many of the dolls were black, including “Honey Chile,” in her Polka Dot dress. Visitors to the program included first lady Eleanor Roosevelt, and famed architect and Wisconsin native Frank Lloyd Wright. You can learn about this fascinating project in a 1995 account by the UW-Milwaukee Employment & Training Institute.

The home sits on an odd block between W. State St. and W. Kilbourn Ave, and immediately south of W. Richardson Pl., a very short street that begins, improbably, in a parking lot on the east side of N. 27th St. (Range 22 East), terminating two blocks to the west on N. 29th St. (Range 21 East). W. Richardson Pl. runs at an angle to the regular street grid, and is a remnant of the original Watertown Plank Road, which was started in 1848 and finished in 1853. About 12 blocks to the west, on W. State St., Wisconsin Historical Marker #36, placed outside the original Miller Plank Road Brewery, commemorates the early highway, constructed of White Oak at a cost of $110,000. The plank road cut the round time trip between Milwaukee and Watertown (a 58-mile distance) to a mere three days from the eternity it took to travel the same distance on dirt roads (in the summer), mud roads (spring and fall) and the impassible snowed-in roads of the winter. The toll was about a penny a mile. Most of the traffic was agricultural, with the road providing a path to market for farmers in the interior. More than one wagon load of barley was unloaded at Miller’s brewery, to be sure.

The age of this neighborhood is evident also in the street architecture of this truncated street, since its curbs are constructed of stone, always a sign of age.

To the north, Neighborhood House, a social service agency, occupies a corner building. A vestigal sidewalk leads to a home no longer there, but now occupied as a fenced playground for children. To the south, a fine three-story apartment building with no apparent major defects, is boarded up and vacant. This used to be a much more common sight in the neighborhood.

Between these two properties lies the Ulbricht home and garage. The latter, at 35 years of age, is in rather rough shape, and has suffered water damage, judging from the patched roof. A few trees, now quite aged, include maples that may have been part of the original landscaping, which otherwise is notable by its absence. The front porch, with its 1927 detailing, including little inset masonry diamonds, seems in fine repair, although it just doesn’t seem broad enough to do the home justice. The high limestone foundation is noble and attractive, above it, the beige-painted asbestos siding, is not so much so. A bronze plaque attests that this home has been placed on the National Register of Historic Places.

On the second floor of the home, a bowed window overlooks the street, and a door leads to the roof of the porch, which might be a nice place to hang out some time. This level is painted a golden yellow color, and is also composed of the 1947 asbestos siding, which does little to enhance the building’s curb appeal. The attic area is sheathed in cedar shakes, with a faded red color. A view of the home from the south shows a few other touches, such as projecting bays, and cut-out corners, which were popular features of the era. The architect included roof brackets for good effect, and even one of the bays has yet its own bay, adding to the substance of the structure, which is, as noted, still rather modest among the firm’s output. A chimney on the north wall is quite tall, and appears to be original. It has finely detailed brickwork at the top.

This home is a survivor, and bears as part of its history over eight decades of occupancy by a single family, and a notable one at that. Its longevity serves as a tribute to Elsa Ulbricht, an innovator and a pioneer of racial justice through the medium of art. 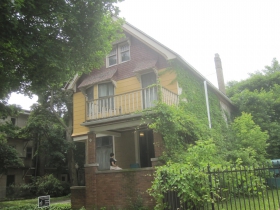 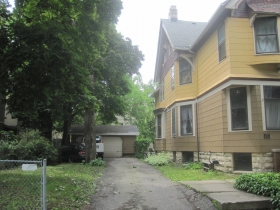 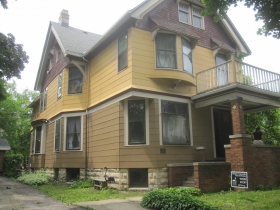 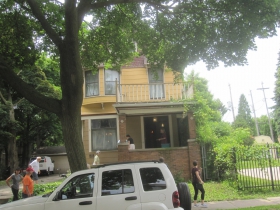 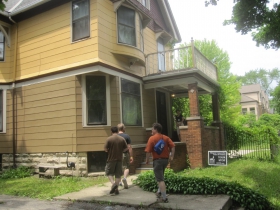 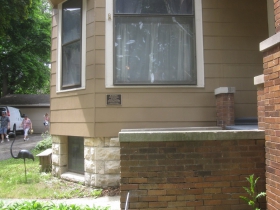