Milwaukee’s arrest rate in murder cases outpaces that of most other large U.S. cities.

Two earlier Data Wonk columns from 2016 (here and here) looked at data in reports from the Milwaukee Homicide Review Commission on shootings and homicides in Milwaukee.

Somewhat mysteriously, the homicide commission stopped issuing its reports after mid-2016. An October 2017 article by the Milwaukee Journal Sentinel’s Ashley Luthern (“Milwaukee Homicide Review Commission shifts focus, pauses study of killings”) suggested several reason behind ending these reports, including a lack of funding and, most disturbingly, the withdrawal of support from the police department. Did former chief Ed Flynn sabotage this effort?

In March of this year, Luthern was joined by Gina Barton to co-author an article that argued, in the words of its title that Milwaukee’s problem is that “we don’t stick with what works when it comes to reducing crime and preventing violence.” As an illustration, Luthern and Barton expanded on the demise of the shooting reports:

As homicides spiked in the summer of 2015, the director of the city’s Homicide Review Commission — tasked with analyzing deadly violence here — was booted from her office inside Milwaukee police headquarters.

Mallory O’Brien‘s removal from the building brought an end to the collaboration that had been the commission’s hallmark since its formation in 2005.

Edward Flynn, then the Milwaukee police chief, saw less value in the commission as he built up the department’s technology and crime analysis capabilities. Police officials stopped showing up at the monthly meetings. Not long after O’Brien was kicked out of the police station, her real-time access to the department’s information was revoked.

The reporters conclude that O’Brien “again has access to police data after Interim Police Chief Alfonso Morales took over.” Whether this means the reports will be revived is unclear. The Commission website appears not to have been updated since 2016 and an email to O’Brien did not receive a response.

In the Commission’s absence, a surprising source has stepped in to help fill the information gap—at least partially. Recently, the Washington Post released data it collected on more than 52,000 criminal homicides over the past decade in 50 large cities, including Milwaukee.

The Post’s data includes the name, gender, age, and ethnicity of the victim, the map coordinates of the homicide, and the disposition of the case. It used three categories of disposition: open, closed by arrest, and closed without arrest. The Post used the example of a case where the suspect died as an example of the latter. It did not include suicides, accidents, and mass shootings in its rate calculations.

In contrast to the Homicide Commission, the Post did not include information on the perpetrator and his or her relationship with the victim, the rates compared to the population, non-lethal shootings, or the weapon used.

The Post released the data to accompany an article titled “Murder with impunity, Where killings go unsolved.” The theme was that “there are areas where murder is common but arrests are rare.”

Compared to the other large cities, by this measure, Milwaukee fares relatively well. Overall, the arrest rate was just under 49% for all the cities. By contrast, 64 percent of the 1,115 homicides in Milwaukee resulted in an arrest. As the next graph shows, this places Milwaukee in 6th place among its peers. 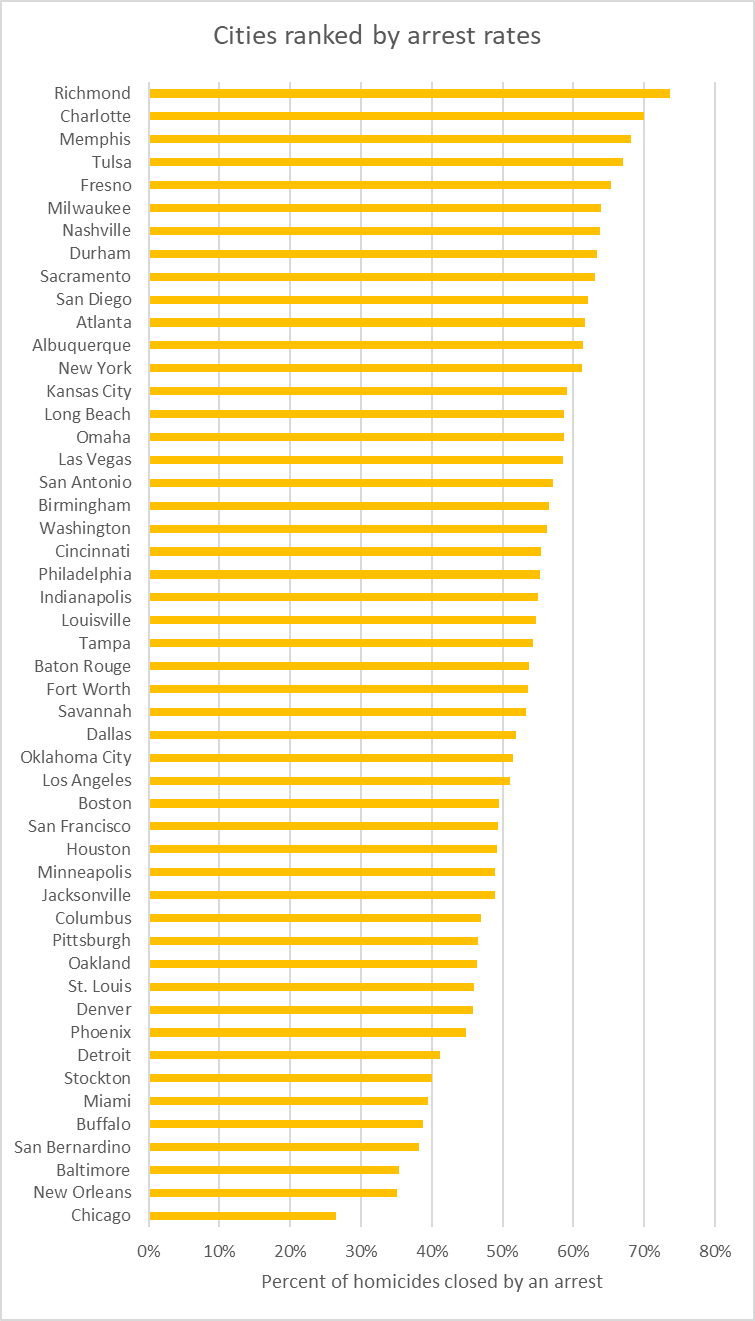 The next graph, using the Post’s data, shows the number of homicides (blue bars) and the arrest rate (orange line) for Milwaukee since 2007. In recent years, the arrest rate has declined from 70% to around 60% in Milwaukee, and homicides jumped in 2015. Still Milwaukee’s arrest rate outpaces that of the majority of cities and, according to the database maintained by the Journal-Sentinel is 71% in 2018. 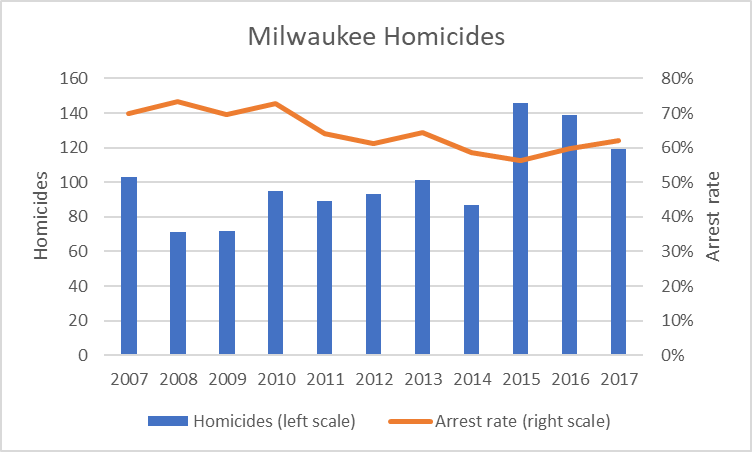 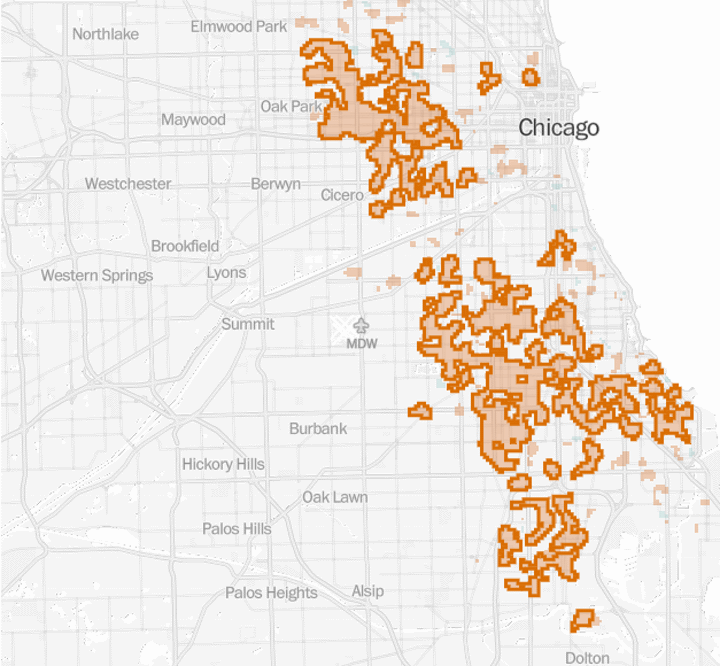 Map of Chicago homicides vs arrests

The next map shows an overview of Milwaukee, as shown below. There is a band of high-homicide neighborhoods running north to south. In most, the arrest rate is quite high. 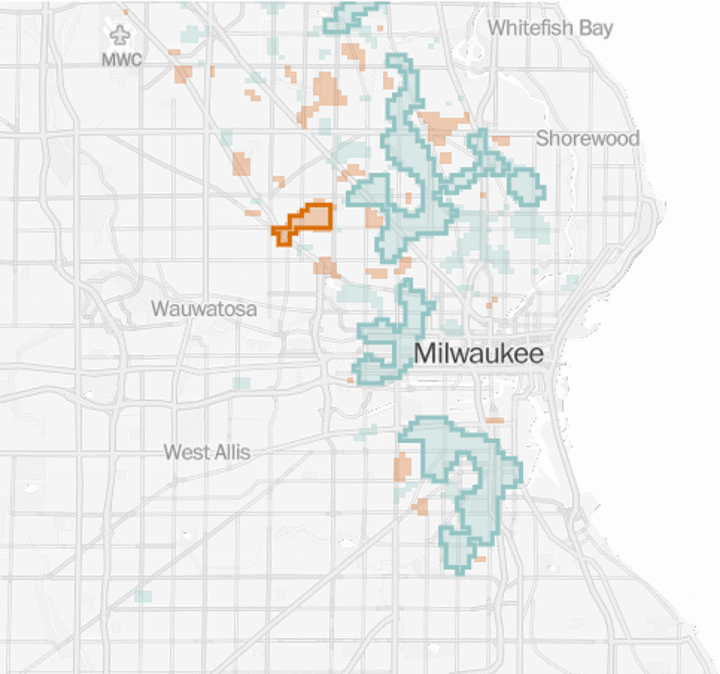 Map of Milwaukee homicides vs arrests

The next map shows some of the same area, but at a larger scale. The locations of individual homicides are shown—in red if no arrest was made and in blue if an arrest was made. As the Post explains:

Areas shaded in orange are places where fewer than one-third of the homicides resulted in an arrest.

Areas shaded in blue are where two-thirds or more of the homicides resulted in an arrest. 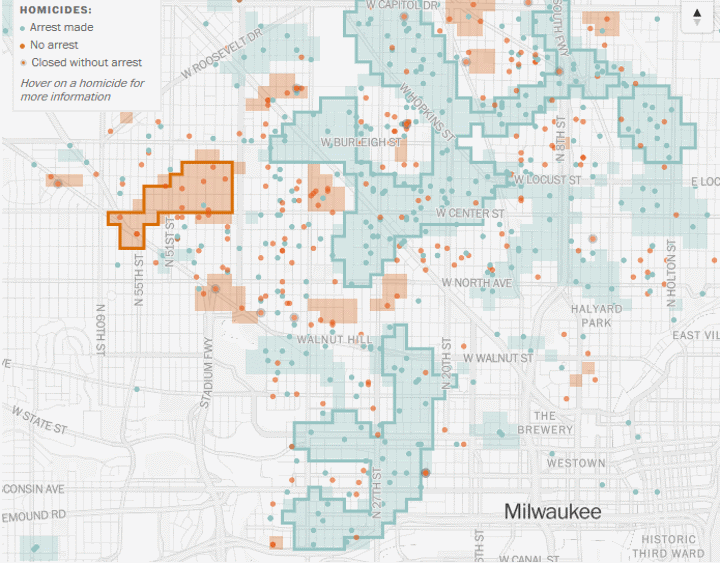 Map of Milwaukee homicides vs arrests

In addition to where homicides take place, the Post data can be used to look at who is likely to be a victim of a homicide—their age, ethnicity, and gender. As the next graph shows, looking at all 50 cities, young black males in their late teens or early twenties are most likely to be murder victims. Black females have a strikingly similar age distribution, peaking around age 20. Yet, even though they are likely to live in the same neighborhoods, their chance of being murdered is one tenth of the males. 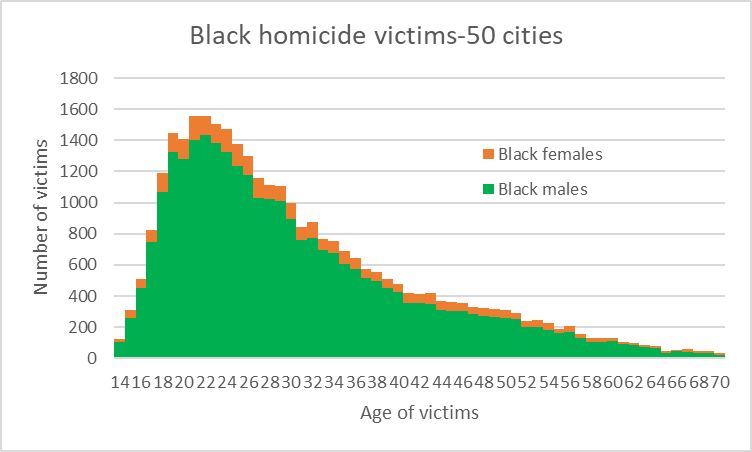 Milwaukee homicides are a microcosm of the national picture. 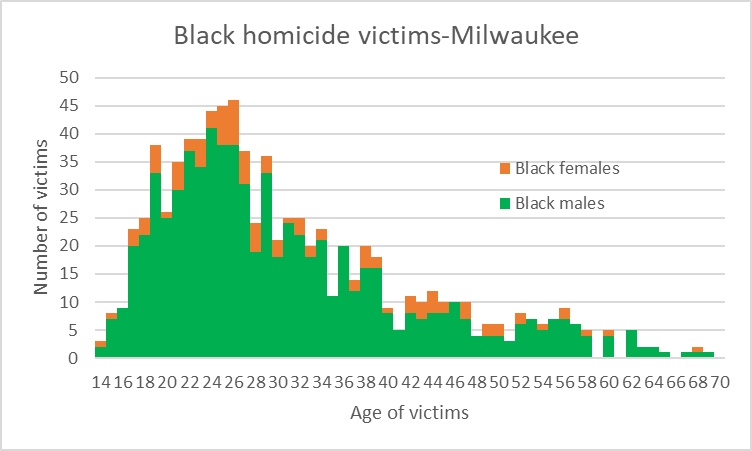 The homicide rates for Hispanic Milwaukee residents follows the same pattern as to age and gender. I have not tried to adjust them for the population in Milwaukee. 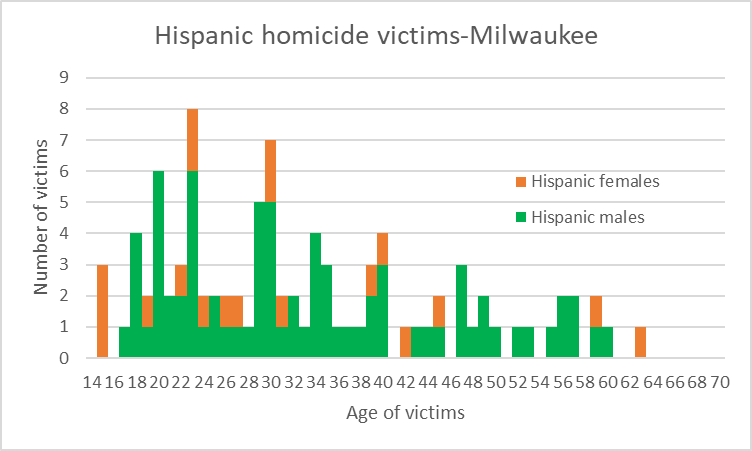 The Washington Post is also developing a database of fatal shootings by police since 2015. It contains some good news: nationally the number of people who were killed by police but who turned out to be unarmed dropped substantially during this period. 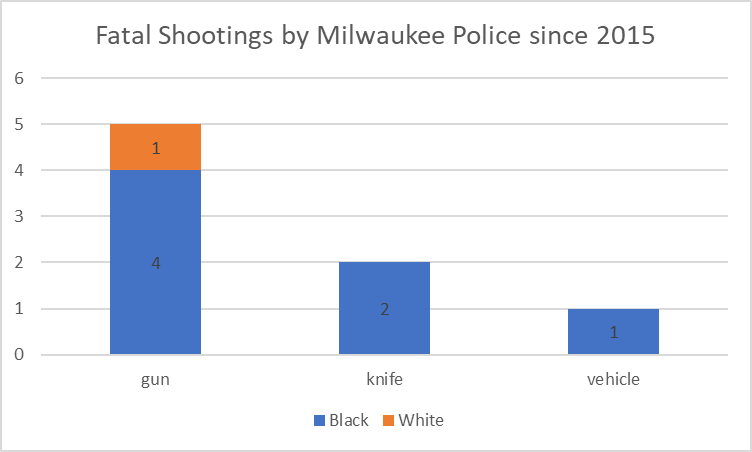 Fatal shootings by Milwaukee Police since 2015

It is striking how localized homicides are. Neighboring areas can have widely varying homicide problems, both in frequency and the rate at which they are solved.

The Post article includes interviews with a number of current and former police chiefs of other cities. One point they make almost universally is that solving homicides depends on a level of trust between residents in the community and the police. When that trust breaks down, it is very hard to find witnesses to crimes. Thus, Milwaukee’s relatively high arrest rate can be interpreted as a positive indicator of the relationship between the residents of stressed neighborhoods and the police.