Who is Josh Pade?

On June 1, Pade became the 10th Democratic candidate for governor in 2018 primary.

By Shawn Johnson, Wisconsin Public Radio - Jun 12th, 2018 11:55 am
Get a daily rundown of the top stories on Urban Milwaukee 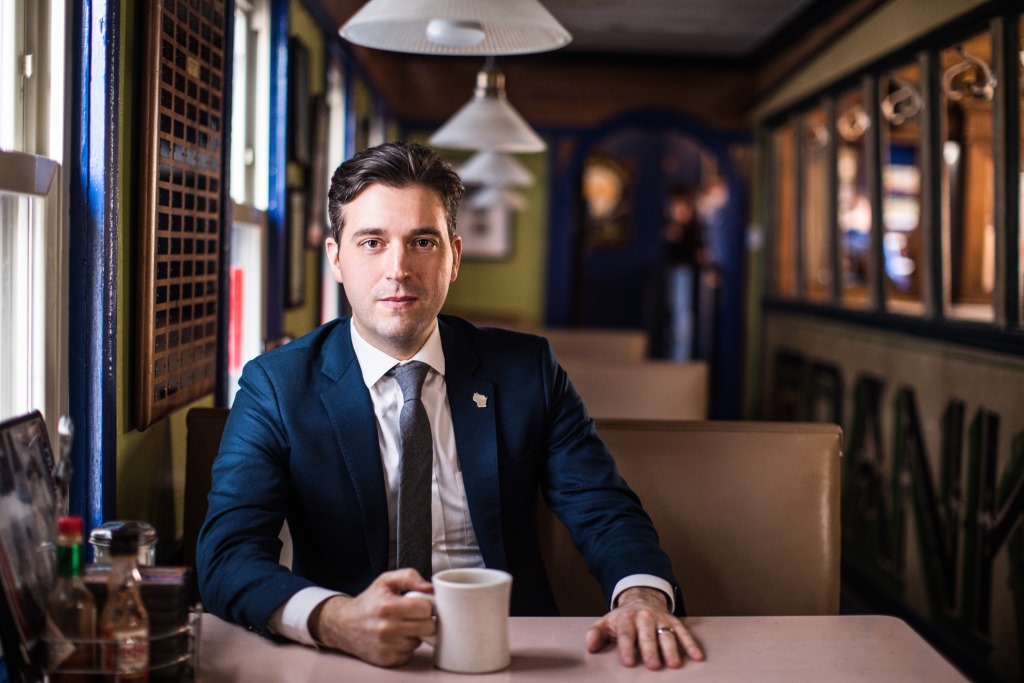 Just when the Democratic field for governor looked like it couldn’t get any bigger a couple months ago, another candidate jumped in the race.

Josh Pade announced his campaign in early April with an online ad that shows him sitting at a lunch counter, while a marching band plays “Roll Out The Barrel” in the background.

In the ad, Pade breaks off a conversation with the woman next to him, and the music stops as he looks directly at the camera.

“Wisconsin,” Pade says. It’s the only word spoken during the entire video.

The ad is called “That says it all,” a reference to a fan favorite from the University of Wisconsin marching band.

Of course, the video said nothing, leaving political observers wondering whether Pade would actually run for governor or become one of the dozens of candidates who formally register campaigns but never follow through.

But Pade did. He turned in more than 2,000 signatures June 1 to get on the ballot, becoming the 10th Democratic candidate for governor in the 2018 primary campaign.

That earned him a speaking spot with the rest of the candidates at the Democratic State Convention in Oshkosh later that night.

“We’re going to show that ideas and the future is right here in the Democratic Party for the state of Wisconsin,” Pade told the crowd. 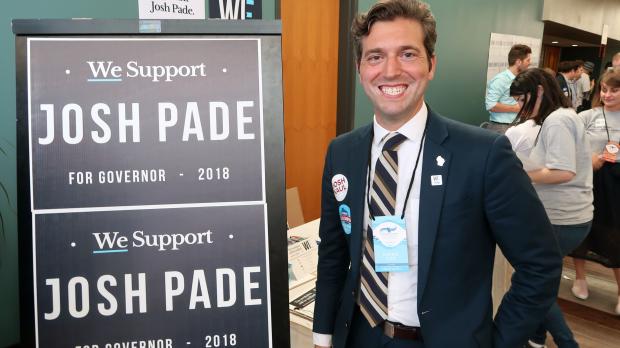 Josh Pade stands next to his campaign’s table at the Democratic State Convention on June 1, 2018, in Oshkosh. Shawn Johnson/WPR.

Pade, 38, said he realizes the field of candidates was already large when he announced, but he said he’s a new face.

“I feel like there was an opening there, and I’m going after it,” Pade said. “If we don’t run, we’ll never know how we’re going to change the state, so that’s why I jumped in.”

Pade grew up in Kenosha where his family ran a grocery business. He said he left Wisconsin at age 27 to go to Suffolk Law School in Boston and lived in Washington D.C. and New York before recently returning home.

While Pade is an attorney, he said he’s worked in “enterprise, risk and crisis management” and spent several years working for the clothing company J. Crew.

Pade said he remembers Feingold’s first campaign for U.S. Senate when he beat the odds to win.

“He was the outside candidate, kind of the underdog that ran a very innovative race and changed the way campaigns are done in Wisconsin,” Pade said. “It inspired me to know that someday I could do something like that.”

Feingold was indeed an underdog in 1992, but it was not his first campaign. He’d already served a decade in the state Legislature by that time.

Asked whether he’d considered running for a lower office first, Pade said he’s looking for a job that fits his style of leadership.

“I’ve never really seen the governor’s role as being a linear track between the Legislature,” Pade said. “I think there is no kind of feeder role to go into the governorship.”

Pade said his campaign plans include traveling the state on what he calls a “Wisconsin Idea” listening tour.

The reactions to Pade’s candidacy by activists at the state Democratic Party convention ranged from friendly to downright frustrated.

Bill Ahrens, of Pearson, was fine with Pade running.

“The more people we get the better,” Ahrens said. “Provided they can come together after that.”

Democrat Suzanne Poisl, of Waukesha, said she’s been attending forums with the other gubernatorial candidates for months before Pade entered the race. She’s not sure what he stands for.

“I’m giving him a break, but he’s totally not in my consideration at all,” Poisl said.

Kerry Trask, of Manitowoc, is more blunt. He said Pade made an already-large field even larger at a time when Democrats are having a tough time picking a candidate.

“Unless he’s already sort of demonstrated some good reason why we should pay attention to him, I mean, why would we?” Trask said. “The attention of the party is so diverse at this point that the last thing we needed is another candidate.”

The state Democratic Party gave Pade the same amount of speaking time as every other candidate for governor, but other groups feel less pressure to recognize his candidacy.

Two liberal groups – Our Wisconsin Revolution and the Wisconsin Working Families Party – have been holding online votes as part of an endorsement process.

Wisconsin Working Families Party Director Marina Dimitrijevic said they asked their voters whether to include Pade with the rest of the candidates. She said they rejected him.

“And it was overwhelming,” Dimitrijevic said. “The people just didn’t want him to be considered in our final nine.”

By that time, Dimitrijevic said the groups had already been holding forums with the other candidates for governor.

Dimitrijevic said they plan to hold a debate next month. Pade won’t be invited.

Pade did enough to get on the ballot for governor, but it might take more to get a seat at the table.