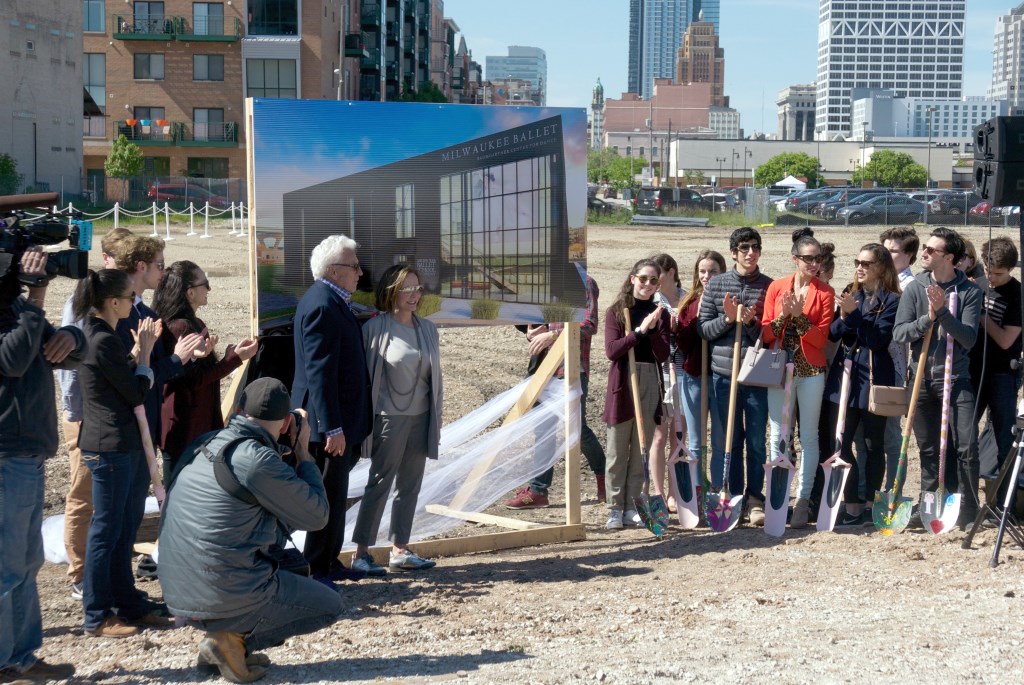 The Milwaukee Ballet broke ground on the new Baumgartner Center for Dance at a ceremony on Tuesday.

The groundbreaking was catered and well attended. Bartolotta Restaurants supplied the food, and waiters in white jackets made tracks around the gravel pit serving sparkling water and cocktails with an orange garnish.

The groundbreaking was really more celebration than ceremony. The new $26-million, 52,000-square-foot facility will significantly raise the company’s profile said artistic director Michael Pink, with both the larger national dance community and within Milwaukee’s artistic community. It will be named for board members and benefactors Donna and Donald Baumgartner.

The company is finally, “Getting our hands around our own destiny,” he said.

With $22 million already raised, the price tag on this project makes the groundbreaking Tuesday no small feat. The ballet raises about $3 million in donations every year to cover about forty percent of their operations. Justin Mortara, ballet board president, said the project had the full support of the board.

The Milwaukee Ballet is the only institution of its kind in the state. And their school and academy have about 600 families involved, and in the past year roughly 56,000 attended performances at the ballet. With the opportunity for growth in operations and profile, Milwaukee Ballet executive director Julia Glawe said this project was a marker that, “It is the Ballet’s time.”

The new building, located at 132 N. Jackson St. in the Historic Third Ward, will have seven studios, three more than its current space on National Avenue. This extra practice space allows the company to do more with its community engagement programming and with other organizations, Pink said. There may even be fitness classes at the center in the morning. “Try and get people in the building and dispel the myth that the ballet is this strange place of elitism,” Pink said.

To represent local government at the swanky groundbreaking were Chris Abele from the county and Rocky Marcoux, director of the Department of City Development, for the city. Marcoux praised the ballet for its prudence in site selection, noting the central location and access to transportation routes, downtown and the lakefront.

Abele took off his county executive cap, saying that the county didn’t have anything to do with the project. He praised the local art scene in Milwaukee, saying it’s greater than talked about. And he said this art scene can be used to incentivize companies to move to Milwaukee. He said he has a passion for the arts, and, “Art, makes us not merely mercantile.”

It seems the ballet would be hard-pressed not to add some theatricality to the sometimes droll proceedings of a groundbreaking. They had a five-piece brass band on site for pageantry and to build suspense in a drawn-out unveiling of the new center’s rendering. 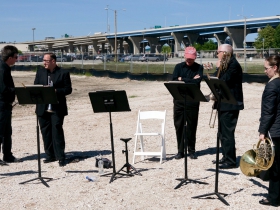 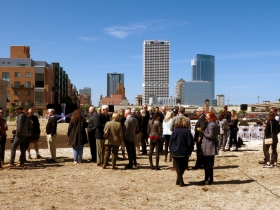 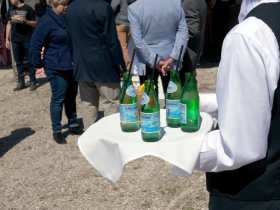 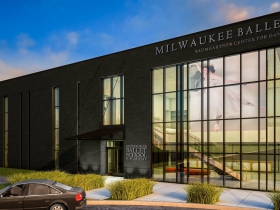