By Ximena Conde, Wisconsin Public Radio - Jun 1st, 2018 12:22 pm
Get a daily rundown of the top stories on Urban Milwaukee 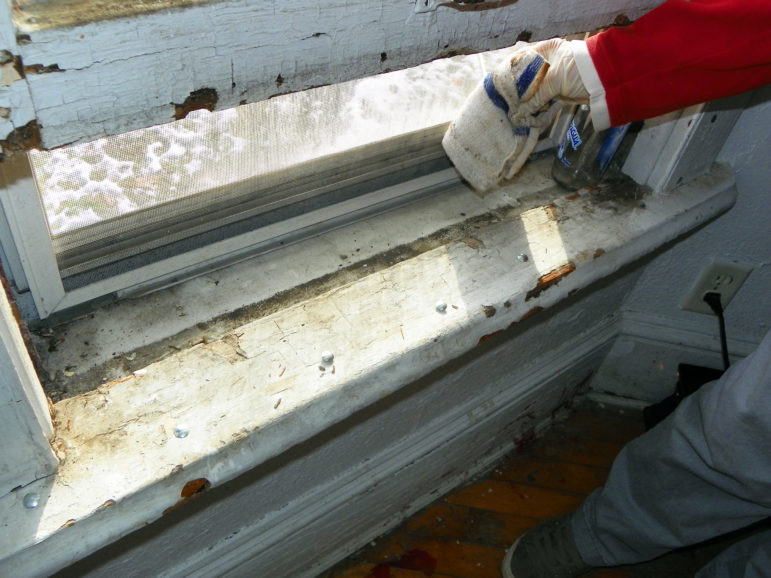 Lead from old, peeling paint is one source of lead poisoning in children. Photo by Matt Cambell of the Wisconsin Center for Investigative Journalism.

Findings show poor or nonexistent records for cases and gaps in following up with a number of cases.

The state could not obtain files from 46 percent of the nurse case management files it selected for review.

It found that public health nurses closed 64 of 70 cases prematurely and without meeting the requirements of lead testing required by the state.

The state requires children to test positive for less than a certain level of lead twice and at least six months apart. Instead, findings show cases were being closed by public health nurses after patients saw dips in lead levels.

In 16 percent of the 70 cases closed, children saw their blood lead levels increase again but the audit reports these cases were not reopened.

When children test for elevated blood lead levels there is also supposed to be an environmental investigation. The investigations aim to identify the causes behind the lead poisoning of a child.

In 26 percent of the investigations that required a form of lead abatement, cases were closed with no evidence that the work had been done.

The Milwaukee Journal Sentinel first published a draft of the report Thursday.

Many of the state’s findings reinforce those in an internal review the Milwaukee Health Department published in January.

“This is not complicated,” said Alderman Michael Murphy. “You have a state statute, you have a requirement to follow and somehow in their department, they lost sight of that.”

“I concur with the findings of the State’s audit of the City of Milwaukee Health Department’s Childhood Lead Poisoning Prevention Program (CLPPP). The health and safety of the children in Milwaukee must be our first concern. I remain committed to working with the State to improve our lead program and ensure we are in compliance with State laws and obligations,” interim Health Commissioner Patricia McManus stated in a press release.

In a written statement, Mayor Tom Barrett said, “This report came to the same conclusions we came to last year that there are significant issues that needed prompt attention. That’s why we have invested so much effort in corrective action and we continue to prioritize the health of children in Milwaukee to make sure we are doing everything that is appropriate.”