By Dee J. Hall, Wisconsin Center for Investigative Journalism - May 22nd, 2018 01:26 pm
Get a daily rundown of the top stories on Urban Milwaukee 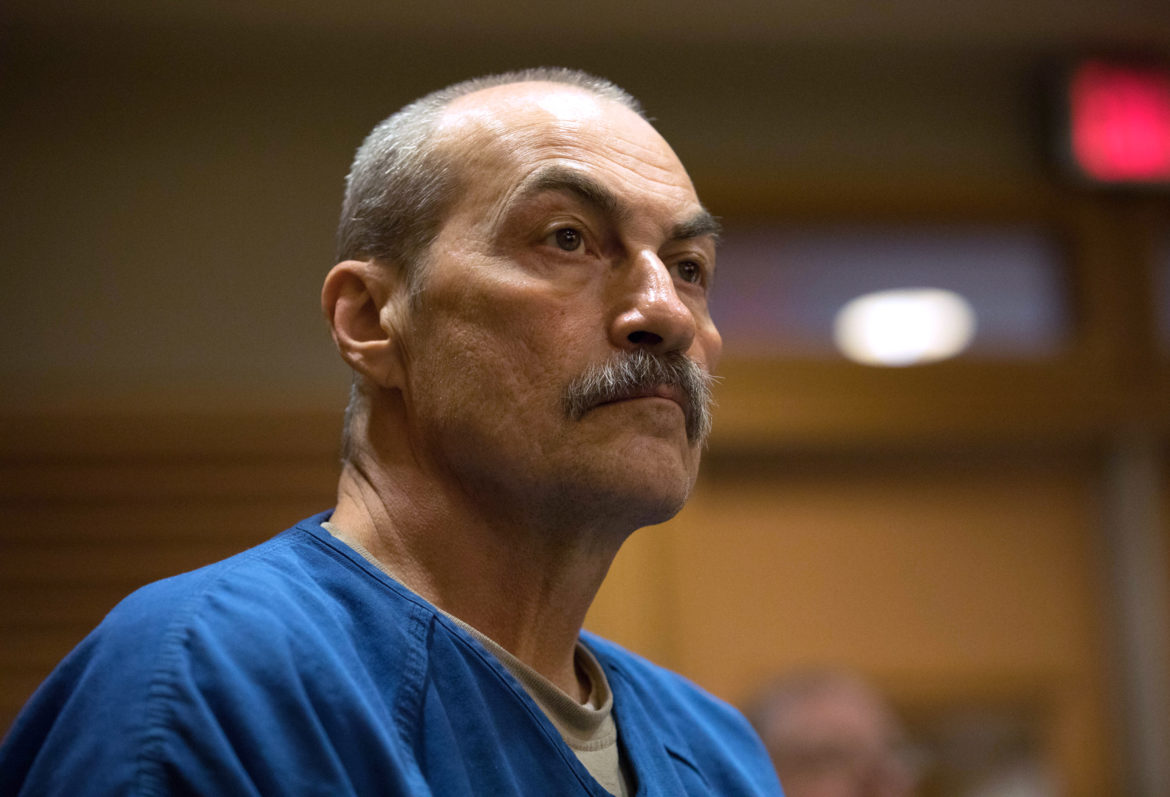 The case involving Richard Beranek, 59, is among at least 13 in Wisconsin which the FBI acknowledges it used flawed microscopic hair comparison. He was convicted in 1990 of sexually assaulting a rural Stoughton woman and was serving a 243-year sentence until his conviction was overturned in June 2017. Beranek is pictured in a Dane County, Wis. courtroom on Feb. 14, 2017. Prosecutors dropped all charges against Beranek on Thursday, May 17, 2018. Photo by Coburn Dukehart/Wisconsin Center for Investigative Journalism.

A Wisconsin man who spent two decades in prison based in part on flawed FBI forensic work has been cleared of rape, battery and burglary charges, the latest in a series of exonerations around the country based on the now-discredited technique of microscopic hair comparison.

Dane County Circuit Judge Nicholas McNamara approved a motion by the Dane County District Attorney’s Office on Thursday to dismiss all charges against Richard Beranek, 59. In the motion, the prosecution said while it still has a “strong belief” in Beranek’s guilt, it was dropping the charges to spare the victim of the 1987 home invasion and sexual assault from additional trauma.

On Friday, attorneys for Beranek said the dismissal came just days after DNA testing on crime scene evidence “revealed a distinct male DNA profile that was not Mr. Beranek’s.”

“I think that this DNA testing and the timing of the dismissal speaks volumes — that Richard Beranek could not be the assailant here,” said Bryce Benjet, staff attorney with the Innocence Project based at the Cardozo School of Law at Yeshiva University.

Beranek attorney Cristina Bordé of the Wisconsin Innocence Project said the defense has been notified that the profile was compared to others in a local DNA database without success. Beranek’s attorneys say it is unclear whether the prosecution is comparing it to other suspects developed during the initial investigation. 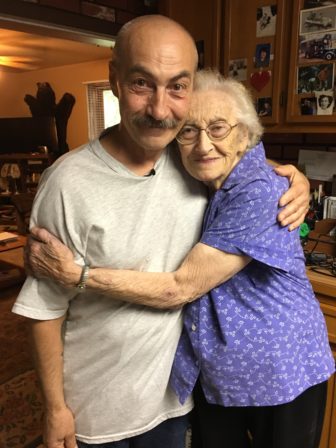 Richard Beranek is pictured with his mother Rose Beranek at her home in Junction City, Wis. after his release from prison on June 23, 2017. All charges against Beranek, who had served 29 years in prison, including 19 years for a sexual assault that he did not commit, were dropped Thursday, May 17, 2018. Photo by Keith Findley / Innocence Project.

“Although we certainly welcome the decision to dismiss the case, we are dismayed that the district attorney appears unable or unwilling to admit a serious mistake was made here,” Benjet said. “When we send the wrong man to prison, the guilty party remains free to commit other crimes.”

Dane County District Attorney Ismael Ozanne did not immediately respond to an email asking whether his office planned to submit the partial DNA profile for additional comparisons.

Beranek, of Junction City, has been free on bail for 11 months since another Dane County judge overturned his conviction after the FBI admitted its analyst’s conclusion tying him to a hair from the crime scene was flawed.

After a court battle, testing arranged by the defense confirmed that Beranek was excluded as the source of DNA from the hair and semen from the perpetrator’s underwear left at the scene of the sexual assault.

Beranek was convicted in 1990 of raping a 28-year-old mother of two in her rural Stoughton home in 1987. Six alibi witnesses placed him in North Dakota at the time of the assault.

Beranek was serving a 243-year sentence imposed by Dane County Circuit Judge Daniel Moeser, now retired, who issued the 2017 decision granting him a new trial. Moeser said based on the new evidence, “the hair which was allegedly that of the defendant’s at trial is now known not to be that of the defendant.”

Since then, the state said it conducted “exhaustive” testing on the physical evidence in the case.

“A low-level, partial DNA profile was detected from the male underwear located in the basement of the victim’s house. The defendant was excluded from that profile,” according to the motion to dismiss filed by Ozanne and Assistant District Attorney Erin Hanson.

Despite the victim’s confident identification of Beranek, Ozanne and Hanson said dismissal was warranted to spare the woman, identified only as KD, additional turmoil.

“KD knows that it was the defendant who brutally attacked her in 1987,” the prosecutors said. “However, KD does not want to testify in the new trial.” 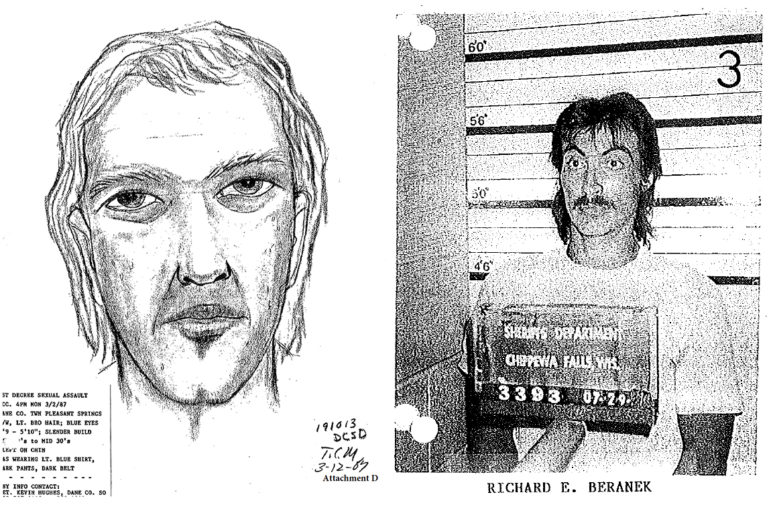 From the Dane County Circuit Court

The motion quoted John Wixted, a psychology professor at the University of San Diego in La Jolla, California, as saying the victim’s identification of Beranek was made with “high confidence” and “using what appears to be a fair photo lineup,” adding that the two-year delay between the crime and identification of Beranek was “not a crucial variable.”

But Beranek’s attorneys said the techniques used to identify Beranek were “suggestive and unreliable and have since been disavowed” in guidelines issued by the Wisconsin attorney general’s office. Borde´ said research has shown no correlation between the certainty of an identification and whether it is correct.

In their motion to dismiss, Ozanne and Hanson said the prosecution was prepared to introduce evidence of other crimes allegedly committed by Beranek, including domestic violence and other sexual assaults for which he was never charged.

The motion also recounted two Chippewa County sexual assaults for which Beranek was convicted and served time, including an assault on an 11-year-old girl and another on a 16-year-old girl whom Beranek found riding her bike near the Girl Scout camp where she worked. 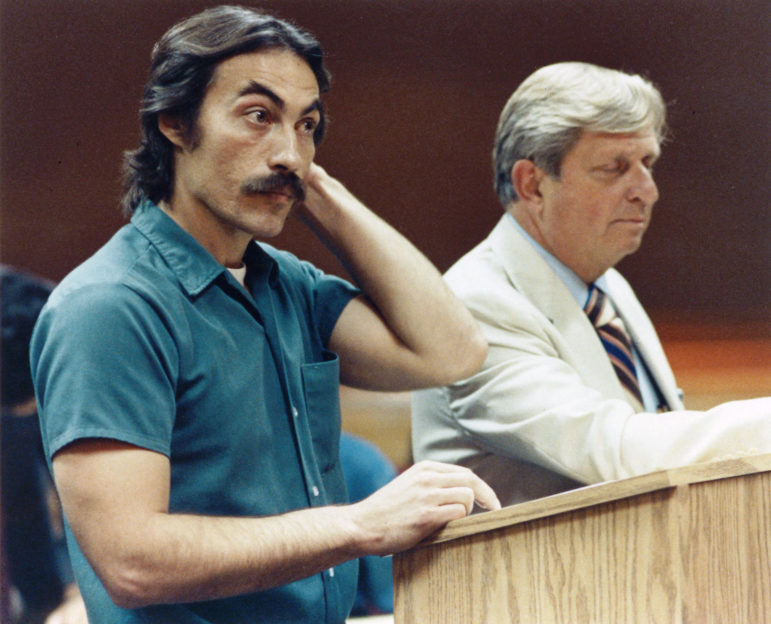 “Even without the use of the hair or other physical evidence, and with the defendant being excluded from one partial DNA profile, the State believes that given the strength of KD’s testimony, along with eyewitness identification expert Dr. Wixted, and … evidence showing motive, opportunity, plan and identity, the jury would still find the defendant guilty.”

Borde said Beranek took responsibility for the earlier sexual assaults and served 10 of his 29 years in prison for one of those. But she found it “really, really troubling” that the prosecution is touting other, unsubstantiated allegations against Beranek in the face of “all the completely exculpatory evidence” clearing him in this case.

The Wisconsin Center for Investigative Journalism, in a story published in October, reported that there are at least 13 Wisconsin cases in which the FBI acknowledged its hair analysis was unscientific. Nationwide, an ongoing review of such cases has concluded that analysts exceeded the limits of science more than 90 percent of the time. 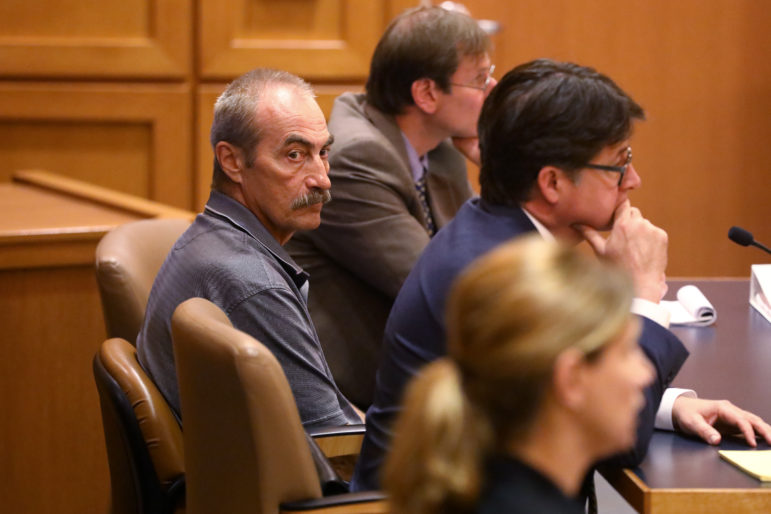 Richard Beranek appears at the Dane County Courthouse with his attorneys Dean Strang and Bryce Benjet on Aug. 10, 2017. Prosecutors dropped charges against him Thursday, May 17, 2018. Photo by Riley Vetterkind / Wisconsin Center for Investigative Journalism.

While some states such as Massachusetts and Iowa are actively seeking out and re-examining cases involving flawed hair analysis, Wisconsin is not.

At least 70 people besides Beranek have been exonerated after hair analysis by the FBI or state crime lab analysts was proven by DNA testing to be mistaken or overstated, according to the National Association of Criminal Defense Lawyers. The group is participating in a nationwide re-evaluation of thousands of these cases with the FBI and the Innocence Project.

Two cases in which defendants were exonerated before that review began involve defendants from Dane County:

— Anthony Hicks was exonerated six years after being convicted of sexual assault in 1991.

— Ralph Armstrong was cleared in 2009 after spending more than 28 years in prison for a murder in Madison. The evidence showed the murder likely was committed by his now-deceased brother.

In 2018, at least three other men have been exonerated due to flawed hair analysis. In January, a California man was found innocent after an FBI-trained state hair analyst said he no longer stood by his 1990 testimony linking Glenn Payne’s hair to hair found at the scene of the alleged sexual abuse of a young child. Payne had served 15 years in prison.

In February, Jeffrey Clark and Garr Keith Hardin were cleared of a 1992 kidnapping and murder in Kentucky after DNA testing on hair found on the victim that had been tied to Hardin was determined not to belong to either man. Both had been in prison for 23 years. 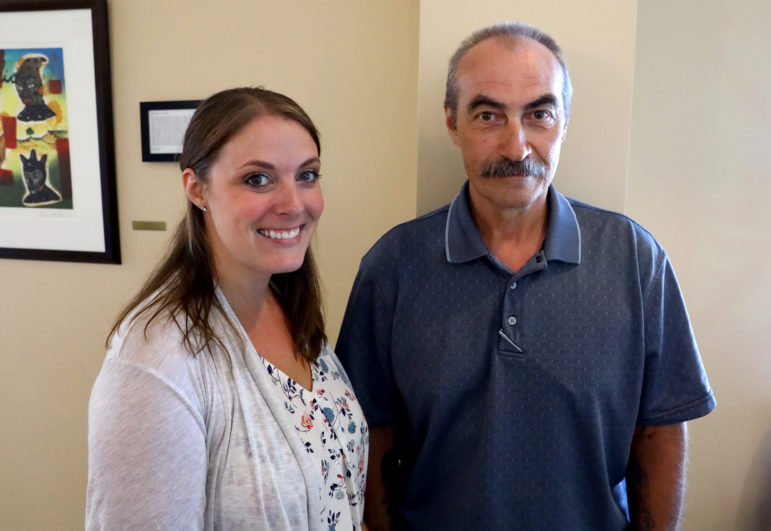 Richard Beranek is seen with daughter Desiree Burke at the Dane County Courthouse on Aug. 10, 2017. Beranek was released in June 2017 after serving 19 of his 29 years in prison for a rape he did not commit. All charges were dropped Thursday, May 17, 2018. Photo by Riley Vetterkind / Wisconsin Center for Investigative Journalism.

Beranek’s exoneration comes after the Wisconsin Legislature again failed to pass a bill to allow wrongfully convicted people in Wisconsin to petition for $50,000 a year, or up to $1 million, in compensation. The current rate is $5,000 per year, or a maximum $25,000. Larger amounts have been awarded in Wisconsin in standalone bills that authorized higher payouts for specific exonerees.

According to the FBI and other experts, examiners in these flawed microscopic hair comparison cases made several types of mistakes:

Said Benjet: “Where you ignore clear evidence that someone else committed the crime, it is a recipe for injustice.”