How to Survive Childhood Abuse 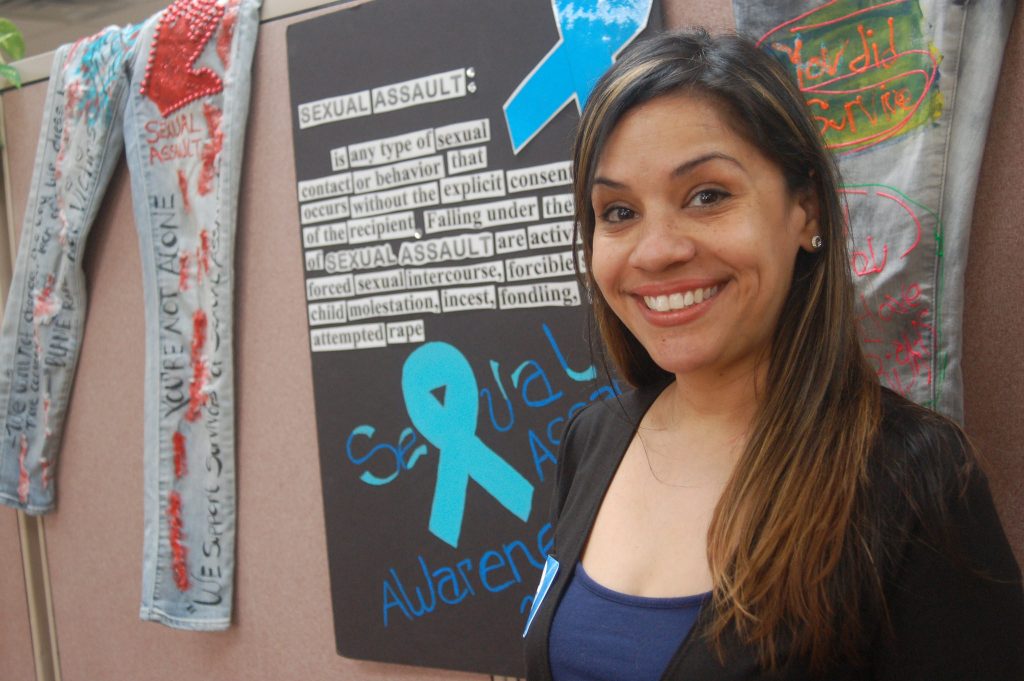 Eileen Alvarado, author and youth advocate, stands next to a “Demin Day” display at the UMOS Latina Resource Center. Photo by Edgar Mendez

The book began as a series of journal entries written in the middle of the night. Pieced together, a story of survival unfolded, said Eileen Alvarado, 47. Her book, “Hope Looks Like You: Surviving Abuse,” tells the fictional tale of Mara and Soledad, two girls from Milwaukee learning how to live with the abuse they suffered, and how to overcome it, Alvarado said.

“Life begins when you believe that there is hope,” said Alvarado, who’s worked for the past decade as a youth advocate at the  United Migrant Opportunity Services (UMOS) Latina Resource Center.

Alvarado said she knows survival well, having experienced trauma and abuse as a youth. She speaks at schools and other organizations to youth who could be or already have been victimized. Many are facing issues such as dating violence, sexual and emotional abuse, self harm and even human trafficking. Her own experiences as well as those of the youth she works with helped to inform her book, which follows the girls as they fall victim to traps that young people who’ve suffered from abuse often do.

“Mara deals with her trauma by jumping from abusive relationship to abusive relationship. Soledad tries to overcome her pain through self-harm,” said Alvarado, who is hosting a book release and book-signing event at Walker’s Point Center for the Arts, 839 S. 5th St., on Saturday, May 12, her birthday.

She hopes that individuals who attend the event will purchase a book for themselves, and another that would be provided free of charge to youth she meets at her presentations. 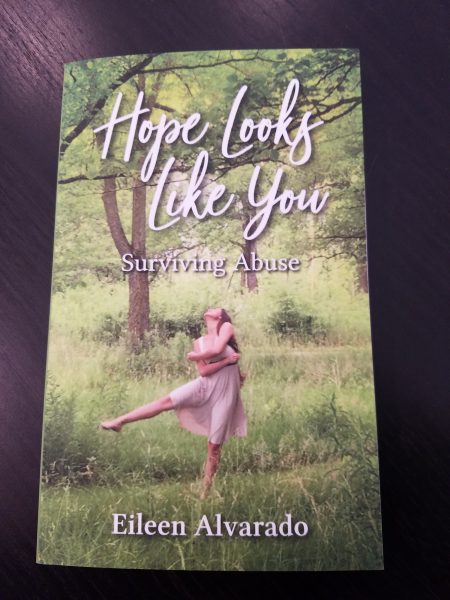 “Hope Looks Like You: Surviving Abuse” features the story of two fictional female characters from Milwaukee. Photo by Edgar Mendez.

“When young people read the book they can see that they can overcome their pain,” Alvarado said.

Physical and sexual violence and abuse among youth is widespread, according to experts. According to the cCenters for Disease Control (CDC), 21 percent of females and 10 percent of males in high school experienced sexual and/or physical dating violence in the U.S. The National Center for Victims of Crime reports that one in five girls and one in 20 boys are victims of childhood sexual abuse. Self harm, which includes suicide or suicide attempts, drug overdoses, cutting and other types of self injury, has increased substantially among girls, according to a CDC study published in 2017. Children who are abused are more likely to be victims of physical abuse or sexual violence in the future, the CDC reports.

Damaris Becker, bilingual domestic violence advocate at UMOS, also works with victims of youth violence, helping teens access legal services and navigate the criminal justice system. She said confronting abuse in any family is difficult, but there are also cultural aspects that bring about even more complex challenges for Hispanic youth, which Alvarado touches upon in her book.

“Oftentimes families are ashamed or conflicted with who the perpetrator is. There are also families who are (undocumented immigrants) who are terrified of going to court and testifying, or maybe even that the perpetrator, who is usually someone they know, will be deported,” Becker said.

Those fears and the pressure to remain silent are significant issues facing young victims of abuse in Milwaukee and elsewhere, said Becker’s niece, Gabriella Avila, 18, a senior at University School of Milwaukee. Avila recently read Alvarado’s book, and said the approach she took in sharing the story of Mara and Soledad could help teens in Milwaukee confront those issues.

“It was important that she wrote about and helped bring awareness to these serious issues the youth are facing and also help them understand that there are resources available to help them,” said Avila, who will attend Loyola University Chicago in the fall.

Without help, Alvarado said, the teens often suffer from depression, which can turn into anger, anxiety and low self-esteem, and end up in abusive relationships. Many times, she said, they turn to drugs and alcohol.

A few months back Alvarado met a teenage girl who hadn’t recognized that she was caught in an abusive spiral, and was in danger. She gave her advice that she offers in her book, she said. Alvarado suggested she take time away from the relationship, write down the pros and cons of it and reflect on how he treated her.

“When I saw her again she said she used the tips I gave her and left the emotionally abusive relationship,” Alvarado said.

The book, available on Amazon, is Alvarado’s second. Her first, “Step Free From My Past,” an autobiography about her life growing up in an abusive home, was introduced to a nationwide audience on the Dr. Phil show. Writing that book, as well as her most recent, was part of her survival and recovery process, she said.

“I went through another round of healing when I wrote this book,” she said. Now she hopes the book will help many others heal as well.

“I want this book to end up in the hands of young girls, and for them to read it and know, ‘I can get through this; there is hope,’” Alvarado said.