Mi Casa Su Casa has no fried foods, but plenty of flavor and seasonings.

By Talis Shelbourne, Milwaukee Neighborhood News Service - Apr 19th, 2018 10:34 am
Get a daily rundown of the top stories on Urban Milwaukee 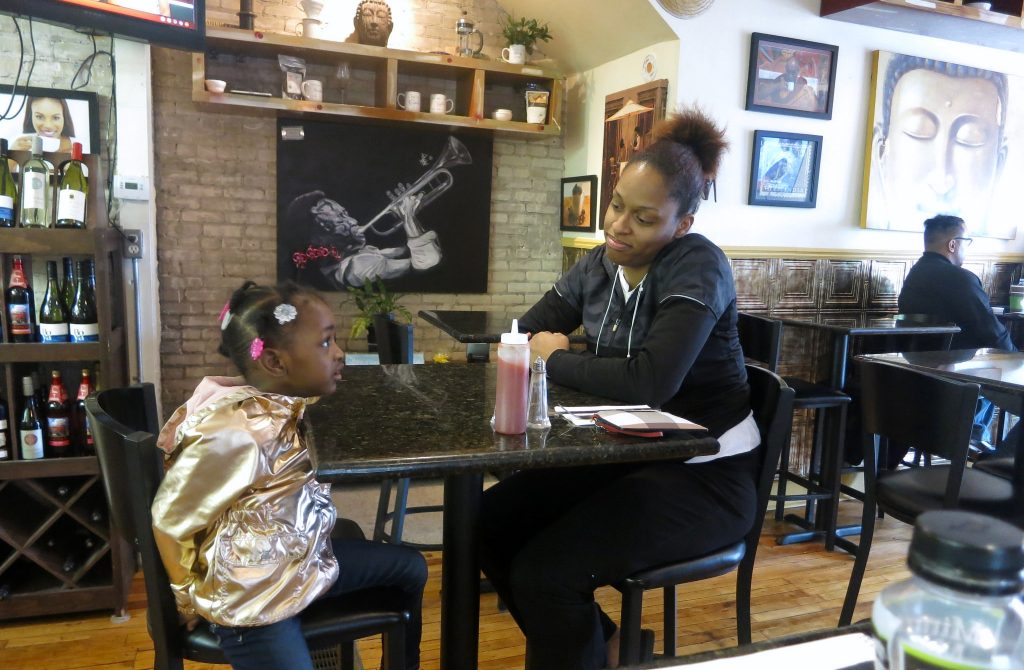 Davina Turner and her daughter, Madison, enjoy the decor at Mi Casa Su Cafe, much of which came from the homes of co-owners Jameel Trotter and Paul Whigham. Photo by Talis Shelbourne.

Growing up in a half-Muslim and half-Christian household, Paul Whigham’s exposure to a mix of American southern and traditional Muslim cuisine led him to become a foodie.

However, as an adult traveling and eating at different restaurants, Whigham realized he was always reaching for the salt and pepper.

“I eat at a lot of places and at the majority of places, food was always under-seasoned; I don’t like bland food,” he said.

Mi Casa Su Cafe, at 1835 N. Dr. Martin Luther King Drive, was developed by Whigham and his cousin, Jameel Trotter. The co-owners said they wanted the restaurant to break away from both bland and unhealthy food.

“Our vision has been [to be] a place where you could get something different, especially in this area,” Trotter said, pointing to M.L.K. Drive. 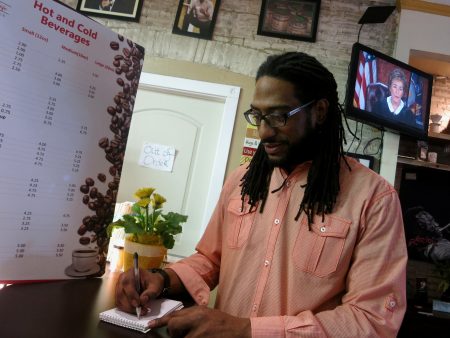 “We serve no soda, no fried foods, and no pork,” Trotter added.

Instead, customers have salad, seafood, chicken, beef and even vegan options. Many foods, such as the potato wedges, are cooked on the grill, and Whigham said the restaurant is committed to proving that healthy food can also taste good.

“We are dedicated to a plant-based diet; what’s the point of living to 100 if you’re not in good health?” Whigham asked.

Before Mi Casa Su Cafe was a reality, the cousins pondered the idea for more than two years. The restaurant opened last year.

Trotter, who taught special education at an MPS middle school prior to diving into the restaurant business, said starting off was challenging.

“Initially when we came here, there was a Somali restaurant,” he recalled, referring to the now-closed Sogal Cafe. “We had to invest money to put in a hood so we could cook things the way we wanted to — healthy.”

For Whigham, who also owns a bar in Milwaukee, the creative opportunities were endless.

“I just sat down one day and created it sandwich by sandwich. I made everything on the menu, except the seafood — and I even helped with that.”

Seafood is one of many different options at Mi Casa Su Cafe. Chef Adam Griffin, who brought his experience from Third Street Pier, Olive Garden and Red Lobster to the restaurant, said shrimp alfredo is his favorite seafood dish to make. Griffin started as a server in 1996 and spent 20 years in the restaurant industry; he’s been at Mi Casa Su Cafe since it opened.

“The work environment is very good here,” he said. “I can be myself and [experience] the fun of getting creative with things that come out of the kitchen.”

Griffin said he also enjoys working with fresh ingredients. “We use the freshest lettuce, the freshest heirloom mushrooms and fresh bread,” he said. “All of our sauces, all our gravies are made from scratch.”

“We have a better overall flavor and [a good] food experience,” he concluded.

And the good reputation has spread. Mi Casa Su Café is one of the featured restaurants during Black Restaurant Week 2018, which runs through April 21.

Kelly Davis was getting a haircut at Gee’s Clippers, when a barber recommended she try it.

“The ambience is nice,” she said looking around after ordering a turkey burger. “I like the menu,” she added, “[and] that [the burger] is grilled.”

William Cooper, a chef at the restaurant, said he enjoys cooking dishes such as the steak and cheese pita, which features mushrooms, onions, bell peppers and several seasonings. “I’m big on flavor,” he said.

Cooper has been working at the restaurant since February and he said the menu has already changed how he thinks of healthy food.

“It changes my eating habits when I’m not here,” he said, adding, “I eat healthier now.”

Healthy eating is especially important to customers such as Davina Turner. Turner comes to the restaurant often because her uncle owns the business next door, Eden’s Pointe Home Care.

When she decided to eat healthy, Turner said she noticed a difference.

“When you eat unhealthy you don’t have a lot of energy and it’s bad for you, skin-wise. Now that I’m eating healthy, I can tell I have more energy and that’s important. Especially when you’ve got kids.”

Trotter and Whigham said they are looking forward to expanding, opening up patio spaces in the summer and showing off their more unusual menu items, such as wine smoothies.

“The name, ‘Mi Casa Su Cafe,’(My House Your Café) is really a reflection of who we are,” Trotter explained. “Once you come here, you’ll come back.”