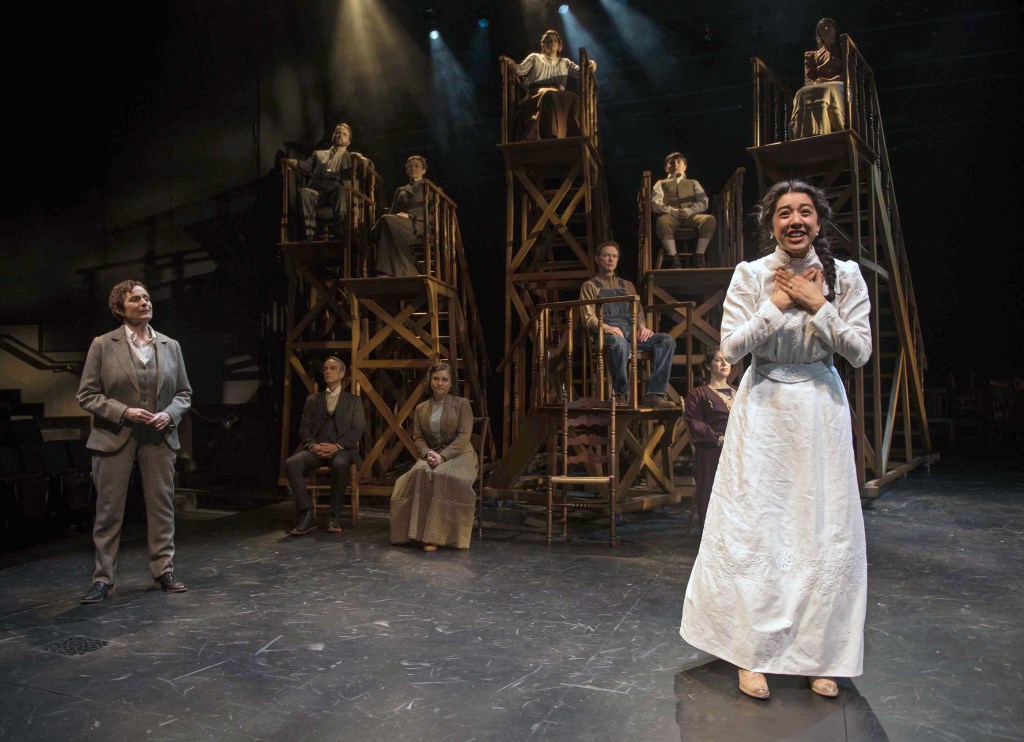 In promoting its final mainstage production of the season, the Milwaukee Rep promises an Our Town for our town — Milwaukee, that is. The company certainly delivers in terms of dozens of Rep familiars and shiny slightly newer actors to occupy Grover’s Corners through May 13 – a cast that respects Thornton Wilder’s words and intentions enough to resist making this a series of star turns.

But this is more a workmanlike rather than a vital and fresh staging of a true masterpiece of American theater. The most modern touch is color-blind and gender-blind casting.

Our Town has been performed so often from high school upward since the 1940s that I suspect a quarter of each night’s audience has been in or seen an earlier version. That is a daunting familiarity. But it is also an opportunity for theater experts to step out within the New England vignettes that dot the play. They can or should emphasize what Wilder constantly hints at under his affection — a sadder underbelly to what many in America still regard as a robust and happier era.

While many patrons familiar with Our Town will leave satisfied by the higher skilled talents before them, others may note ways in which other productions have done better, including some past Rep outings that have brought out the uncomfortable edges that this production glances off in a few memorable acting moments.

In making Our Town speak to a modern audience, director Brent Hazelton leaned on his experienced actors and perhaps too much on the production expertise at hand in the Quadracci Powerhouse.

The lighting by Noele Stollmack was fine in creating distinct pools for the cast to slip in and out of. Sound designer Barry Funderburg’s welling gospel music was nicely comforting. Rachel Laritz’s costumes were slip-on serviceable. Other concepts were likable, such as a costume rack where the cast dresses in front of us or moments when they gang-rush out to move the scenery.

Now no one needs to be married to Wilder’s instructions for a large bare stage and pantomime of props rather than elaborate scenery. But this production would have been better cutting down on the mime while abandoning Scott Davis’ enormous scaffolding assembled for the closing cemetery finale. Good acting can provide all the perspective needed when the dead, stripped of pretense, put the messages of the play before us.

This is a final act so powerful that it sometimes seems to play itself, which is misleading to the finesse and eerie stillness the actors must bring. But it is powerful conclusion to a play which, in this production, has an uneasy, sometimes chilly first act as it invites us into this turn-of-the-century town where marriage was the norm and love of the birds, moon and stars was the entertainment. No radio yet, no TV, no cellphones.

There is a second engaging act of courtship, sweetly played by the company, particularly by Cher Desiree Alvarez as a buoyant, laughing, anxious Emily Webb, whose death in childbirth is also the centerpiece of the finale.

How should a production modernize Our Town without violating it? Should it just try to mimic and gently make fun of the past certainties about small town life (which Wilder’s stage manager undercuts so revealingly)?

Well, when explored more deeply within Wilder’s language, there is such maturity of insight into the humdrum that Grover’s Corners jumps out of the mist in all the appeal of its minimal concerns and daily routines. Just don’t let too much fussing get in the way.

Wilder also provides some surprising dialogue opportunities.  There are depths of honesty and character that actors can capture in the briefest scenes – for example, James Ridge as drunken, bitter Simon Stimson.

That era’s comfort of living in the same place and sharing generations in the same cemetery should have deeper resonance to our times than “those were the good old days.” The play’s untroubled casual patriotism rebukes modern attitudes, just as its characters’ insulation from the impending changes and conflicts of life also inspires recognition. (Wilder wrote the play knowingly on the eve of World War II.)

Lately on our city streets, we have also seen that the idealism of youth can be more than romanticism. But while Wilder is more concerned about young love and fidelity, there’s a touch of that impulse toward freedom here and a sense of the next generation taking over — sharp retorts and slight rebellions even in that “obey your parents” age. The reluctance with which Emily leaves life lingers in our minds and speaks to every generation on earth.

Universality is best generated when the actors shed familiar techniques and explore the relationships involved, rather than commenting on them.

I liked Laura Gordon’s stage manager, not for breaking new ground but for penetrating Wilder’s inherent humanism without artifice. Rather than painting the part with the traditional folksy veneer, she most often uses simple forensic clarity edged ever so slightly with emotion to step out of Grover’s Corners and into the audience’s conscience.

Alvarez’s Emily conveys an irrepressible life force throughout. She survives an excess of artificially generated emotion in that difficult third act. Chike Johnson and Elizabeth Ledo as Dr. and Mrs. Gibbs convey a nice rapport in the middle section, making us long for more of the same.

As Mrs. Webb, Rana Roman sparks her best laughs when attacking husband Webb, played right down the uncommitted middle by Matt Zambrano despite scenes that could tempt him to cross the line into overacting.

There are character shadings in the simple-minded George Gibbs that Di’Monte Henning hasn’t yet found. 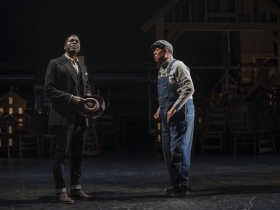 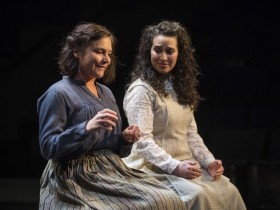 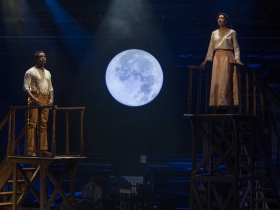 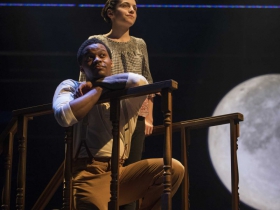 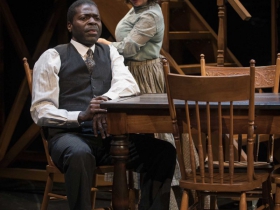 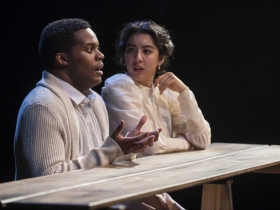