Amid Dust-up We Energies Apologizes

We Energies executives sit in the hot seat as residents complain about finding coal dust in their neighborhood. 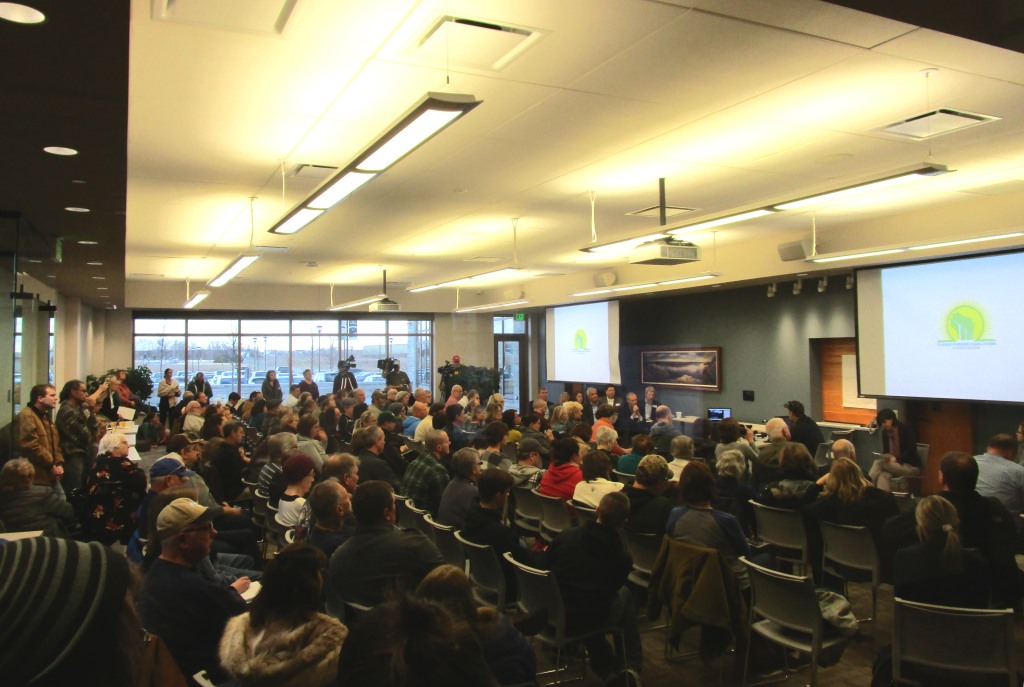 There large turnout for this meeting between We Energies and the public. Photo by Dave Fidlin.

Amid the fog of controversy and debate surrounding the Oak Creek Power Plant came an apology this week — and a pledge to take greater strides to thwart the presence of coal dust on nearby private properties.

A standing room-only crowd of environmental advocates, nearby residents and other interested persons gathered at the Oak Creek Public Library for a hearing Wednesday evening to share concerns of the impact the plant has on the immediate area, and beyond.

At its peak, the number of attendees inched close to 200 people. 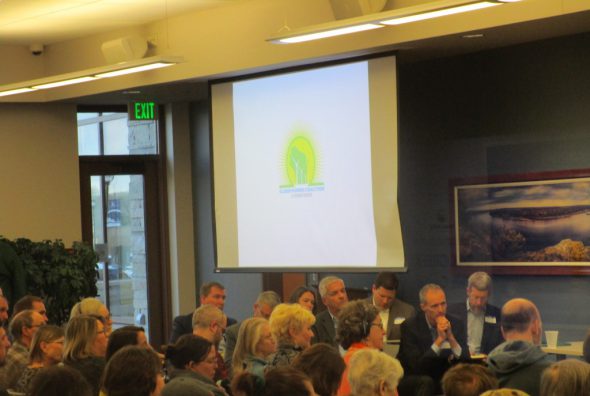 Off to one side of the room were more than a half-dozen We Energies executives, who took notes and listened as one speaker after another shared concerns. At times, the decibel level was high.

“You guys are almost like family,” Charles Michna said, in jest, as he expressed frustration with the ongoing concerns he raised about the plant’s impact. Michna lives 60 yards from the power plant.

Michna did not mince words as he pointed fingers at the executives for the alleged unresponsiveness to past complaints.

“The problem is the DNR (Department of Natural Resources) is not regulating you,” Michna said. “You guys are making your own rules. You guys do what you want, when you want. You guys are an ecological disaster to Southeastern Wisconsin.”

Michna and many of the other attendees who stepped to the microphone shared the view coal-powered energy sources can have harmful health impacts.

Groups such as the Clean Power Coalition of Southeast Wisconsin and the Environmental Accountability Group have been on a vigorous grassroots campaign, asserting coal dust contains such toxic metals as lead, mercury and arsenic. Inhaling particulate matter, the organizers say, can aggravate asthma, respiratory symptoms and increase hospital emissions.

Pointing to studies backing their position, the groups also have gone on the offensive, saying coal dust can lead to increased mortality from cardiovascular and respiratory diseases, as well as lung cancer.

Speaking to the executives, Dana LaFontsee, spokesperson for Clean Power Coalition of Southeastern Wisconsin, said she viewed the ongoing use of coal power as a continued detriment to the entire region.

Not all of the speakers were sold on the power plant leading to harmful health impacts, however.

Robert Drenzek, a member of the International Union of Operating Engineers Local 420, has worked at the power plant for four decades. Drenzek said he is part of the union’s negotiating team.

Throughout his tenure, Drenzek said he has worked with hundreds of employees on such issues as health insurance benefits.

The local debate raging over coal power was inflamed last month. Residents living in close vicinity to the plant discovered black coal dust covering homes, cars and a playground. Testing from a firm, Aspen Consulting, linked the dust to the plant.

Caledonia resident Carl Lindner, who also lives in close proximity to the plant, implored We Energies to consider other energy alternatives, such as solar.

“We all know clean energy is coming,” Lindner said. “It’s just a question of when. The question is how fast will you do it? That comes down to money.”

At Wednesday’s hearing, residents came with visuals of the dust’s impact on private property, leading a We Energies executive to issue a formal public apology.

“I am very sorry for the incident that caused us to be here tonight,” Tom Metcalfe, executive vice president with the utility, said. “We can and must do a better job.”

Moving forward, Metcalfe said We Energies is taking steps to install additional monitoring devices north of the plant into Milwaukee County, where most of the dust has been reported.

Additionally, Metcalfe at the hearing reported the existing coal pile will be reconfigured in an effort to mitigate the likelihood of future dust blowing incidents.

The overture aside, We Energies continues to maintain its stance coal-based energy does not have verifiable health risks.

Jahns last month also said, “We do not believe, based on advice from an independent health expert, that an occurrence of this nature poses health risks to the community.”