And the result is a lovely showcase of great songs and great performers. 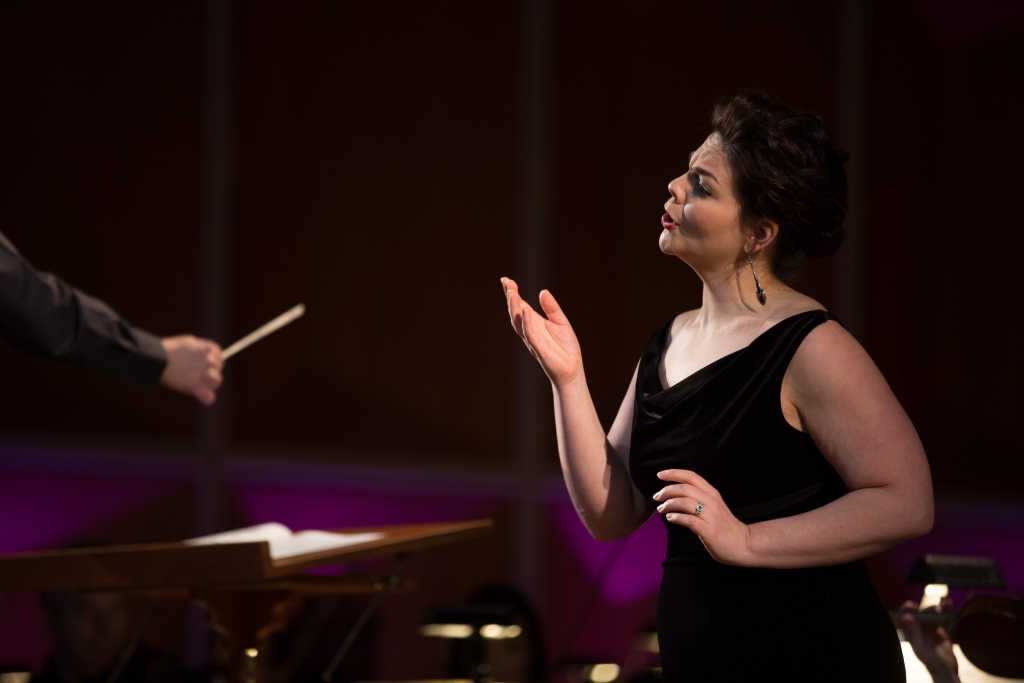 Having postponed its originally scheduled new opera until next season, the Florentine Opera smoothly substituted a collection of some of the most memorable opera pieces by a number of composers (Beethoven, Offenbach, Puccini, Dvorak) performed by guest artists and a polished select chorus of emerging Florentine singers, with the Milwaukee Symphony backing them up not from the pit but directly onstage at Uihlein Hall.

Called “Viva Opera!” and performed this past weekend, the show’s come-on was more than that exclamation point. Concert style opera, as general director William Florescu joked while playing emcee, is “icing without the cake,” a romp through solos, duets, trios, quartets and sextets – 16 in all that reflect both the highs and some of the nifty middles of great operas.  In some ways the audience could lean back and let the music wash over them – harder to do in full opera where you are expected to lean forward a bit. In other ways the success of the concert format depends on how much the singers and the staging bring a feeling not just for musical notes but for the complex emotions of the full works.

If there were such a thing as poaching in opera, the Skylight Theater might have a case against the Florentine, since this same weekend it was opening Offenbach’s Tales of Hoffman, which made up a full fourth of the Florentine’s choices. That may be mainly a tribute to the melodic fame of the composer. But in another way it gives opera buffs a chance to contrast the difference when the music is the centerpiece or when the full dramatic weight and libretto are being explored, which some would argue requires higher demands.

But credit the Florentines. The music is so famous the veteran instrumentalists probably could have played it in their sleep. But the symphony refused do that and under conductor William Boggs maintained professional attentiveness and flexibility both to the music and the singers’ needs.

And the concert presentation was often echoing the emotional circumstances in the music. That somewhat amusingly revealed the variety of operatic acting styles the guest artists were bringing to the stage – the level of pantomime or concern with the real give-and-take within the music.  Fine light tenor Frank Kelly used the Offenbach to exploit his gift for comedy while muscular baritone Alexander Dobson used Mozart to suggest the comic double-takes in The Marriage of Figaro. Some of these echoes were radiant, such as veteran mezzo Susanne Mentzer, who hasn’t lost a step in her stage command and penetrating intensity.

With only evening dress and her physical stateliness, guest artist soprano Rena Harms was as good a “Madame Butterfly” as you can imagine – and you could imagine the haunting Japanese victim underneath her very western physique. Though her big voice could have just overpowered us relying on the beauty of the music — as many who attempt “un bel di vredomo” try – with Harms you could feel her building from delicate underpinnings to the earth-trembling highs of Puccini’s most famous aria.

And then she came back for a quite different character performance – Nedda, the straying wife lost in ardor, a powerful duet from Pagliacci.

There she was partnered by another of the concert’s outstanding guests, baritone Keith Phares, also dynamic as Carmen’s toreador and then playing tender counterpoint in The Pearl Fishers to tenor John Pickle. The tenor also had a notable evening in a variety of roles requiring serious high notes and secure presence.

One of the imported guests, Britain’s Kate Royal, was almost used as a stealth weapon, hiding in duet and sextet until her subtly simple and relaxed soprano broke free on its own toward the finale in Dvorak’s Rusalka.

The production did give a chance to showcase the emerging names from the Florentine’s own Studio Artists program, particularly soprano soprano Rachel Blaustein, asked to blend and stand out as a solo equal. The outing was fun but not as demanding a challenge as staging a new opera (Prince of Players was the original weekend designee) and not as much of a gamble – not with some of the most famous moments of opera assembled.