By Joe Peterangelo, Wisconsin Policy Forum - Mar 1st, 2018 02:44 pm
Get a daily rundown of the top stories on Urban Milwaukee

Bus commuters can breathe easier thanks to a recent announcement that nine Milwaukee County Transit System (MCTS) bus routes slated for elimination will be preserved for another year. Yet, the precarious status of those routes illustrates the difficulty of providing transit services that effectively connect workers who live in the City of Milwaukee with jobs in the suburbs. Three are “shuttle routes” (219, 223, and 276) designed to provide “last mile” connections to business and industrial parks in Brown Deer, Oak Creek, and Milwaukee’s far northwest side, which otherwise are difficult or impossible to access by bus.

The previous plan to cut the bus routes was brought about by the County Board’s rejection of a proposed increase in the vehicle registration fee (VRF) from $30 to $60, which resulted in budget cuts for all county departments, including an $882,586 cut to MCTS. A one-time surplus in MCTS’ budget saved the routes from elimination.

Wisconsin Policy Forum’s research has shown that bus routes designed for reverse commuters often are vulnerable when budgets are tightened. Demand exists for transit in suburban-style business and industrial parks, but is low and inconsistent relative to higher-density urban areas. Consequently, those routes typically are the first to go when budget constraints force service reductions. In fact, that has been the case in several previous difficult budget years for MCTS, when routes serving New Berlin, Franklin, and other suburban locations were eliminated. 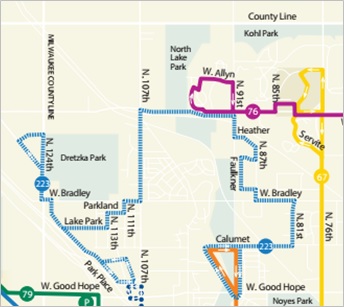 In our 2017 report, The Last Mile, we noted that while MCTS’s three shuttle routes fill a unique employment-focused niche, they are among the least efficient bus routes in the system in terms of passengers per service hour. That is despite the fact that the schedules for those routes are designed to match common shift changes within the business parks they serve, with service availability dropping off significantly at other times of the day. In fact, the most efficient of MCTS’ three shuttle routes – Route 223 on the northwest side (shown in the map on the right) – only generates 7.1 passengers per service hour, compared to a system-wide average of more than 26. We warned at the time that “if MCTS finances require additional service cuts in the coming years, the elimination of the existing shuttle routes may be considered.”

In response to our Last Mile study, MCTS also was planning to increase service on Route 17 to better serve common shift changes for employers in the Menomonee Valley, but that plan has been canceled due to budget constraints. Despite the Menomonee Valley’s location near downtown Milwaukee, it has the development density of a suburban-style business park and other characteristics that make demand for transit services relatively low and inconsistent.

So why would it be a problem to cut bus routes that are deemed inefficient? For starters, few alternatives currently are available in many parts of metro Milwaukee to supplement the bus system with alternative “last mile” transportation services. At the same time, the economic recovery has led to low unemployment and increased the need to eliminate barriers like transportation that prevent available workers from accessing jobs throughout the region. While MCTS’s shuttle routes may not be the ideal solution, the “last mile” problem remains a policy issue that demands a response.

It is difficult for transit planners to find a balance between the competing goals of increasing the speed and frequency of bus services on core routes on the one hand, and expanding the geographic reach of transit services on the other. We have found that many metro areas are redesigning their transit systems to provide faster and more frequent service on core routes, while many others are developing flexible and on-demand transit services and partnerships with ride-hailing services to address last mile challenges in lower-density areas.

In the meantime, MCTS struggles to find an appropriate strategic path given annual uncertainty about its budget and a lack of consensus by all concerned about whether and how to pursue meaningful solutions.