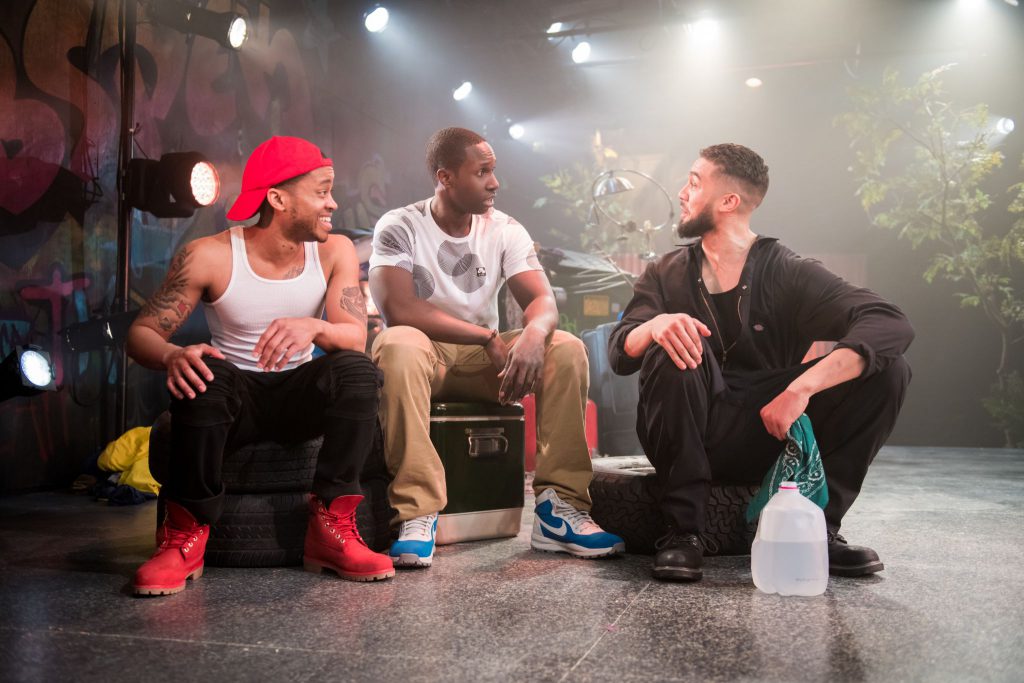 The Milwaukee Chamber Theatre through March 18 is housing a formidable upset to the apple cart of theatrical expectations, adding a fresh emotional and visceral size to “The Brothers Size.”

In the play the gods tease with man, style teases with plot and dance teases with acting – all stemming from African poetic roots and African American political realities.

Much of the unusual veneer stems from playwright Tarell Alvin McCraney, whose story formed the basis of last year’s surprise best Oscar winning movie Moonlight. But McCraney has been a presence in theater since 2007 when “Brothers Size” was done at London’s Old Vic, informing a simple and all-too-typical story about law-abiding and non-abiding members of the same black family and the bonds that both unite and separate them. In the playwright’s hand some powerful verbal dialog is liberally spiced with vulgarities — and the stage instructions, those inserts usually just for cast, are incorporated into the text and action.

There are extended movement sections as well in which the three main actors unite as mystical, arms-flailing locomotives and then separate into more independent variations. Director Marti Gobel actually uses the metronomic dancing as entryways into a dramatic style that both dives into and comments on the characters.

The action is enabled by a fourth character who speaks only in found sounds from an assortment of plastic and metal cans and invented drums. This is talented percussionist Jahmes Tony Finlayson playing The Egungun, a street musician who instinctively knows when to sound out and when to be silent as a grave.

You enter the studio theater passing through TRUE Skool graffiti on the walls, stumbling into a broken-down junkyard vision of an urban street corner — or is it actually a Louisiana garage? It has a working garage door and a car to scoot under provided by scenic designer Madelyn Yee. Here the owner, Ogun Size, is berating his younger brother, Oshoosi Size, to straighten out after a spell in prison, interrupted in his efforts by Oshoosi’s “prison brother,” Elegba, who has a strange hold on his fellow inmate.

Lighting designer Jason Fassl pointedly blinds us at times with spotlights facing into the action like human observers.

My plot outline does not describe the mystical elements being added by McCraney. The brothers reflect the added dimension of Yoruba spirits. Ogun is the honest worker, Oshoosi the comic dreamer and Elegba something of the trickster of African tradition, insinuating himself into the action. When the actors stomp and flex, they are both signaling the spiritual Nigerian elements and anticipating the violent thoughts within the story.

It all adds weight to a tale that, separated into its basic elements, speaks of an all-too common societal situation: why does the miscreant brother pull so hard on the more traditionally honest brother? Why is this trickster from inside the walls so potent an influence? This is theater in which the actors both declaim and address the audience and yet convey an emotional interplay as powerful as any Method school of acting could require.

Gobel has rehearsed this to mesmerizing perfection and astuteness. She takes advantage of the cast members who are more comfortable with some strains to bring them all into simpatico. As Oshoosi, the brother constantly joking and slipping from grace, Andrew Muwonge attacks head-on and dutifully some changes in internal tempo that come more naturally to the other two actors. Even when his changes in direction seem too planned, he is great fun to watch.

As the disruptive Elegba, Marques Causey confirms the formidable stage presence previously exhibited in his young theatrical life, sidling up to the others as a physically less imposing presence who becomes more slyly imposing and always dangerous. As Ogun, the do-gooder who might seem the weaker and most predictable character, Travis A. Knight is a true stage leader, quietly smart in how he reflects Ogun’s internal control, stronger than even he realizes and then stunningly angry when offended.

The brothers have a fascinating exchange near the end about what draws them to each other and then they suddenly burst into “Proud Mary,” an affectionate yet revealing moment when McCraney as scriptwriter reminds patrons that there are no holds barred – and no predictability —  in how he will dig into the spirits and personalities under his gaze.

The experience is deeper than the play itself, but so potent and revealing that “The Brothers Size” is speaking volumes. 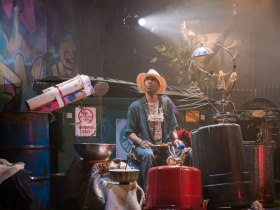 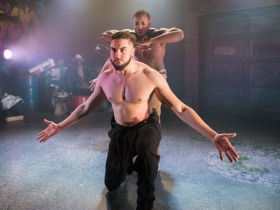 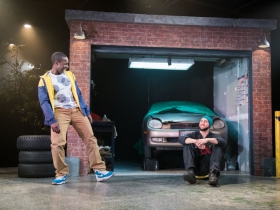 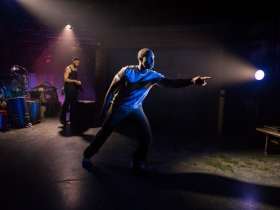 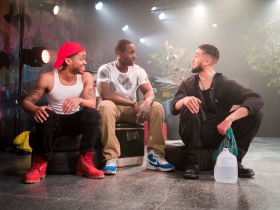 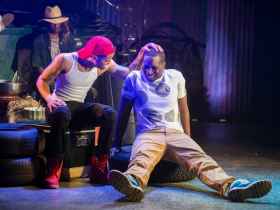