By Gretchen Schuldt, Wisconsin Justice Initiative - Feb 26th, 2018 02:31 pm
Get a daily rundown of the top stories on Urban Milwaukee 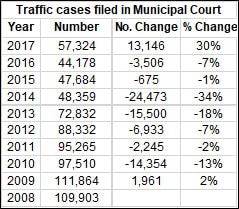 The number of traffic cases filed in Municipal Court increased 30% in 2017, but still lagged far behind the traffic caseload the court saw as recently as 2013.

Traffic ticket cases peaked in 2009, when 111,864 cases were opened, according to Municipal Court statistics. That is 49% more cases than were opened last year. 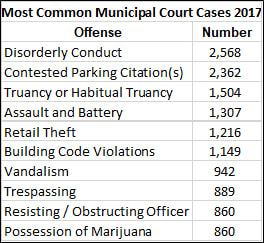 While traffic cases were up substantially last year, other types were down. The number of adult general ordinance cases – things like disorderly conduct, marijuana cases, and minor retail theft — filed last year dropped from 13,153 to 11,632, a decline of 12%.