The home is fittingly located on an oval. 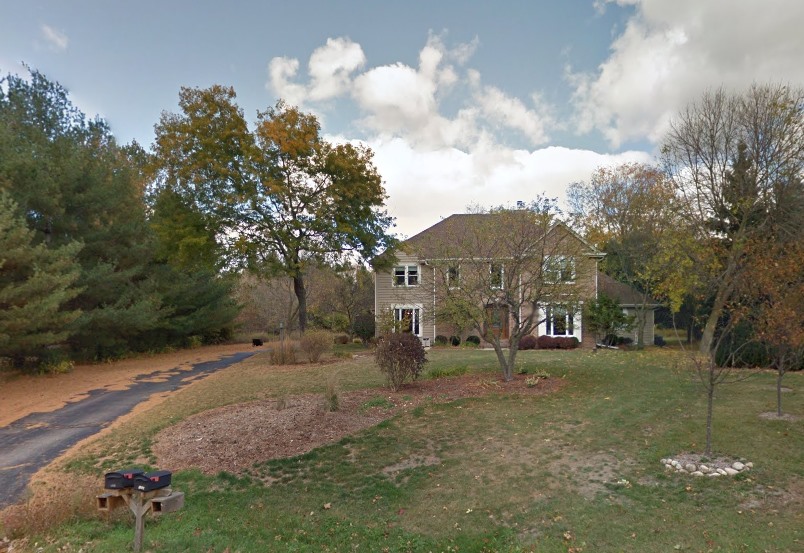 Bonnie Blair is the most decorated U.S. Woman Olympian in history, and with the world games now in progress, she is getting her due in any number of “Where are they Now?” pages. Where she is now is in South Korea supporting American athletes, along with her daughter Blair Cruikshank, who, like her mother and father Dave Cruikshank, is a speed skater with Olympic aspirations. Bonnie is posting her photographs (including one of a hamburger she ate for lunch) on the TMJ4 Winter Olympics 2018 page. She has five gold medals and a single bronze one. No American woman can match her collection.

When not in “The Land of the Morning Calm”, Blair and her family can usually be found at their home built in 1988 in the City of Delafield, about 20 miles west of Milwaukee. She and her husband bought the residence for $380,000 in 1998 before the kids were born.

Bonnie Kathleen Blair-Cruikshank is a Wisconsin transplant from Cornwall, New York, where she was born on March 18th, 1964, the youngest of six children of Eleanor Blair, whose husband Charlie dropped her off at the hospital to give birth before heading to take the older kids to a competition. By the age of 4, when many children still have difficulty tying their shoes, Blair was adept at lacing up and skating competitively. After high school in Illinois, she moved to Wisconsin to practice with the U.S. team.

A Retirement in Wisconsin

In retirement, Blair is raising her son and her daughter in the home they share with husband and father, Dave Cruikshank, himself a former Olympic speed skater, albeit one without the bling accumulated by his wife. The home is 3,424 square feet, with four bedrooms and three full baths. It is located on the western border of the St. John’s Northwestern Military Academy, founded in 1884, with the school’s golf course as a buffer.

The home is on a cul de sac, yet is not far from the more regimented, smaller rectangular blocks of downtown Delafield, (originally Hayopolis) a community established in 1837, during the earliest settlement of Wisconsin, when the population was dominated by “Yankees and Yorkers,” — New Englanders of largely Anglo-Saxon background. The Episcopal Church established the Nashotah House Seminary nearby in 1842, and built a church in town by 1853. Both are still in business.

The community, named after early settler Dr. Charles Delafield, was also home of Alonzo Cushing, who received the Congressional Medal of Honor for his valor at Gettysburg, a battle he did not survive. The medal was awarded to his descendants 151 years later, at a White House ceremony hosted by Barack Obama in 2014.

Delafield is home to 7,500 people and 323 deer. The DNR estimates the cervine population to be about double of what it should be, and plans are being weighed to reduce the herd. The community’s historic features include the historic Hawks Inn stagecoach stop from 1845, now a museum, and the 168-year old Red Circle Inn and Bistro, still a restaurant, located about 3 miles to the north in Nashota. The community is ringed by lakes, which freeze up plenty good in the winter, and might afford Blair and Cruikshank the chance for moonlight skating in their romantic corner of the Lake Country.

Then, what could be more romantic on a January evening in Delafield than the annual Tom McNulty Memorial Coon Feed held on Saturday, Jan. 28, at the Legion Hall, 333 N. Lapham Peak Road. This year, the 92nd annual event served up 317 plates to the willing victims. That’s nearly 90 racoons worth of meat!

Perhaps you and your organization might be interested in hearing from Blair herself about her experiences at the Olympics this week. If so, call the experts at World Wide Speakers Group, which represents the Olympian for such engagements at fees ranging from $10,000 to $15,000. If so, you might hear Blair utter this commonsense advice:

Or, perhaps this gem that could have come from the writings of Jane Austen herself:

There is no man in any rank who is always at liberty to act as he would incline. In some quarter or other he is limited by circumstances.

How Milwaukee Is It? The residence is about 18 miles west of Milwaukee City Hall