Many questions asked, but not the right ones, some attendees complain.

By Jabril Faraj, Milwaukee Neighborhood News Service - Feb 14th, 2018 10:14 am
Get a daily rundown of the top stories on Urban Milwaukee 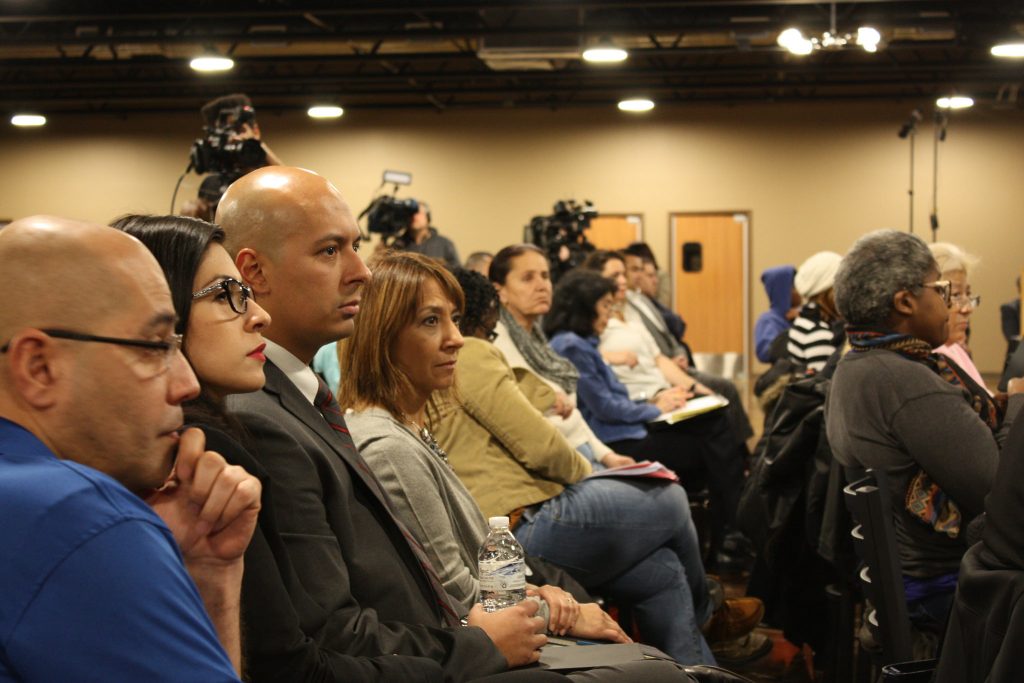 Attendees look on during the forum. Photo by Jabril Faraj.

After a forum where the two remaining candidates for acting Milwaukee police chief answered written questions from attendees posed through two moderators, residents said many of their questions remain unanswered.

“I don’t feel like my voice was heard tonight,” said Cynthia Greenwood, 60. Greenwood said moderators reworded a question about “stopping the shooting of unarmed black men and women.” She said she wasn’t able to get a satisfactory answer.

Davion Clancy, 17, who attended with three other young black men, said he would have liked to hear more about how the candidates — Inspector Michael Brunson and Capt. Alfonso Morales — planned to engage with young people and communities of color. “They didn’t talk about that,” he said.

Jermaine Reed, 44, who was with Clancy and the other young men added, “None of the young people’s questions were answered.”

Former Police Chief Ed Flynn, who was appointed in 2008, announced his retirement, effective Feb. 16, in January. The shake-up came just as a local effort to reform the Milwaukee Police Department began with town hall meetings at the end of December. Residents have said one of the main issues is a lack of trust, particularly between police and communities of color, which are more heavily patrolled. 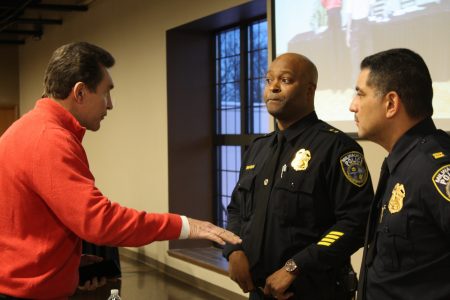 Ald. Tony Zielinski, who is running for mayor in 2020, speaks with MPD Inspector Brunson (middle) and Capt. Alfonso Morales before the event. Photo by Jabril Faraj.

MPD Assistant Chief James Harpole, also named a finalist for the job by the Fire and Police Commission (FPC), announced the day before the forum that he would retire with Flynn. Harpole has been with the department for more than 30 years.

LISC Executive Director Donsia Strong Hill, one of the moderators, said she was “disappointed” that some people commented that they did not feel heard. According to Strong Hill, moderators tried to cover as many questions as possible, while not duplicating questions. She said questions, which were submitted on index cards, “had to be legible,” adding that attendees were not asked to provide names or any kind of demographic information.

“They provided whatever information they wanted to,” said Strong Hill. “I can understand people wanting to remain anonymous.”

Markasa Tucker, director of the African American Roundtable, one of the organizations leading the reform effort, said questions she submitted were not answered. She suggested there could have been more thought put into how questions would be asked, with a focus on representing the different groups in attendance.

During the more-than-90-minute event, Morales and Brunson answered questions about how they would address low staffing levels, how to engage respectfully with black and Hispanic men, how they would handle officer-involved shootings and what new strategies they would bring to the department.

Morales, a Milwaukee native with more than 22 years on the force, stressed the importance of teamwork and building a culture where minorities not only occupy leadership positions within the department but are included in decision-making. He said constantly educating and proactively training officers would be a focus of his administration. Morales was head of the District 2 station for more than 10 years and currently runs MPD’s Project Safe Neighborhood-High Value Target program, a department-wide initiative designed to reduce violent crime by focusing on the worst gun offenders.

Brunson served at District 5 from 2005 to 2010, when he was promoted to commanding officer of District 3. Brunson, who also teaches criminal justice at Concordia University, said his tenure would be defined by integrity, honesty and accessibility. During a stint on the South Side, Brunson took it upon himself to learn Spanish, and spoke about the importance of communication.

Both said it would be “counterproductive” for MPD to cooperate with Immigration and Customs Enforcement (ICE) on a regular basis.

In a 25-minute phone conversation after the forum, Brunson spoke about his views on the questions residents said went unanswered. He called some police killings, such as that of Walter Scott, shot in the back in South Carolina while unarmed and fleeing a traffic stop, “disturbing” and “indefensible.”  He said it is important to increase “positive contacts” with youth and to “show up as often as you can” to “show that you care.” And Brunson stressed the importance of leading by example, saying that people “have a right to voice their grievances,” whether against the government or police.

“I’m not above listening to people,” said Brunson. “I mean, that’s the bottom line — that’s part of being a leader … you have to be willing to listen, even to people who don’t agree with you.”

Morales did not immediately respond to a request for additional comment. The FPC is expected to make a final decision this week.

One thought on “Finalists for Police Chief Meet the Public”