Wangard development is compromise between city, developer and alderman. 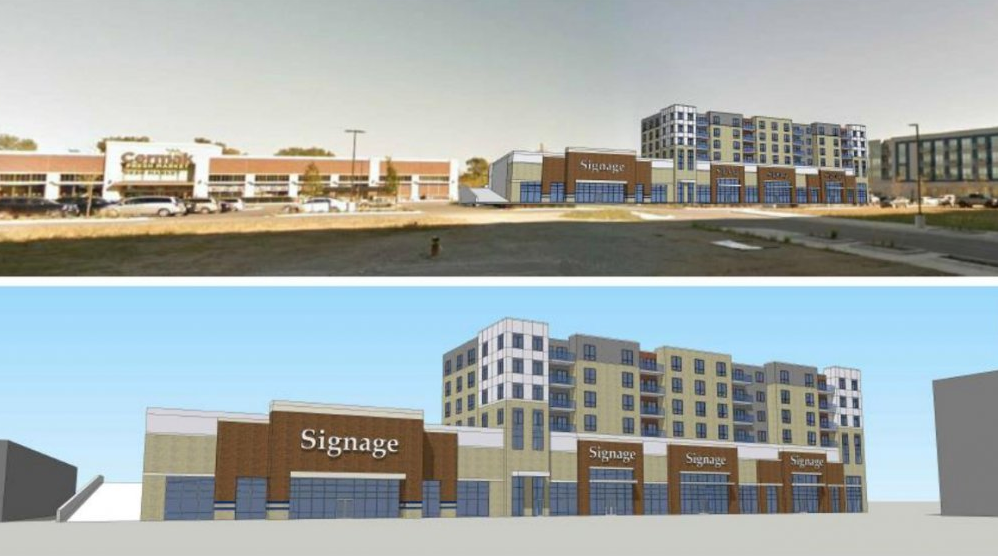 The proposed six-story building comes as a compromise between Wangard, Alderman Jose G. Perez and Department of City Development Commissioner Rocky Marcoux. The three had found themselves at odds with what to do with a site at 200 E. Greenfield Ave. in the southeast corner of the development.

Wangard, with Perez’s support, was seeking to develop retail buildings on the site with potential apartments above. Wangard refers to the anchor tenant in a letter as “a national mid-box retailer,” while Marcoux calls the retailer “a national ‘off price/discount’ retail chain.” Wangard, through Perez, was seeking a zoning change that would have allowed the construction of the retail buildings without the requirements of apartments above.

Marcoux, as part of the terms of the original financing deal, was pushing for a three-to-six-story office building that would serve as a gateway to the UW-Milwaukee School of Freshwater Science and emerging Harbor District.

Perez in a November 2017 letter to Marcoux said: “This Plaza is a project that could, with the right vision, result in a vibrant neighborhood where people live, eat, play and shop.” Perez said the intended office use would detract from the viability of retail businesses elsewhere in the development.

In a letter in response, Marcoux stated that all of the parties involved, including Wangard and Perez approved of the original zoning and $5.3 million city financing package for the development. This included the development of an office building and parking garage at the site. In response to Perez’s “live, eat, play and shop” comment, Marcoux added “equally important, it should be a place to work.”

Marcoux said his department would advance the rezoning for the site, but that he would oppose the change. He did just that with a lengthy speech about his vision for the area before the City Plan Commission on January 22nd. The commission, appointed by Marcoux’s boss Mayor Tom Barrett, supported the commissioner’s viewpoint.

Then when the project got to the Zoning, Neighborhoods & Development Committee on January 30th a compromise was introduced. The zoning change was switched from the wide open “Industrial-Mixed” to a much more restrictive amendment to the entire complex’s General Planned Development zoning package.

The revised plan eliminates the office building and parking garage in favor of a mixed-use building that will line up with the existing apartment building. The zoning change will require the building to be at least five floors in height.

Referring to Wangard’s new plan, Marcoux said “essentially what he is suggesting is that we maintain that three-to-six story massing on Greenfield.” The revised building is intended to help the former forlorn E. Greenfield Ave. serve as a gateway to the emerging Harbor District, including the 46-acre Solvay Coke property that We Energies is seeking to redevelop.

“We’re trying to bring something forward that is a win-win for the community,” Wangard told the zoning committee.

Perez supports the amended plan, telling the committee: “My desire for this is what I heard from the community. I don’t want to make it seem that this is just what the alderman wants, what the developer wants, this has been a very intense conversation.”

This isn’t the first time Marcoux and Perez have found themselves at odds over the project. Perez pushed for the grocery store to be included in the deal, while Marcoux had sought to land a large office tenant for the site, including the FBI. Perez worked at DCD under Marcoux as an Economic Development Specialist from 2006 to 2009, where they reportedly did not always see eye-to-eye. He was elected to the Common Council in 2012.

The new building will have an unusual layout for Milwaukee. Wangard notes that the site, which was formerly a Grede foundry, has soft soils necessitating the parking be placed above the first-floor retail spaces. The six-story building will have commercial tenants on the first floor, parking on the second and an estimated 76 apartments on the top four floors.

Despite the large amount of surface parking that is part of the first phase of the seven-acre site’s development, Wangard says the parking is necessary. The commercial and apartment uses will allow tenants to share the new garage because they need the parking at different times of the day. Wangard drew praise from parking garage critic Alderman Nik Kovac for previously leveraging the same successful relationship between their Avenir Apartments on N. Jefferson St. and nearby 1433 Water office building.

The base of the building is intended to include approximately 45,000 square feet of commercial space spread across four stalls.

The firm will eventually need to return to the city for final design approval on the project. 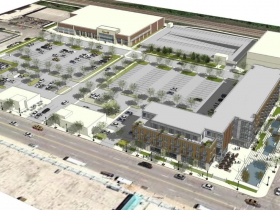 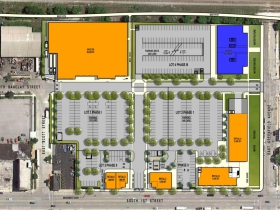 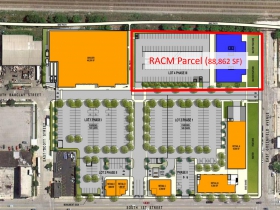 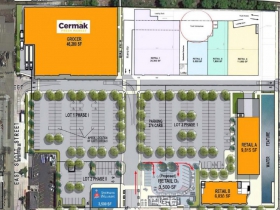 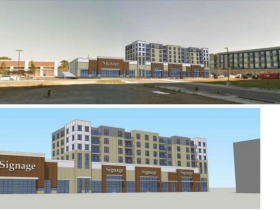 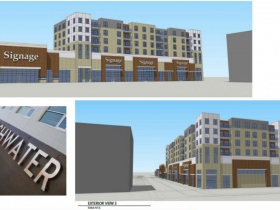 The first apartments built here, known as the Freshwater Plaza Apartments, are full and a wait list has formed for future tenants. Because the project was financed in part by federal New Market Tax Credits, Wangard must set aside 20 percent of the units at below market rates for moderate-income residents. They opened last summer alongside the grocery store.

A water feature at the complex, which traps water on site before sending it into the sewer system, recently received a Green Luminary award from the Milwaukee Metropolitan Sewerage District. The feature was designed by the students and faculty at UW-Milwaukee.

Construction began on the complex in 2015.