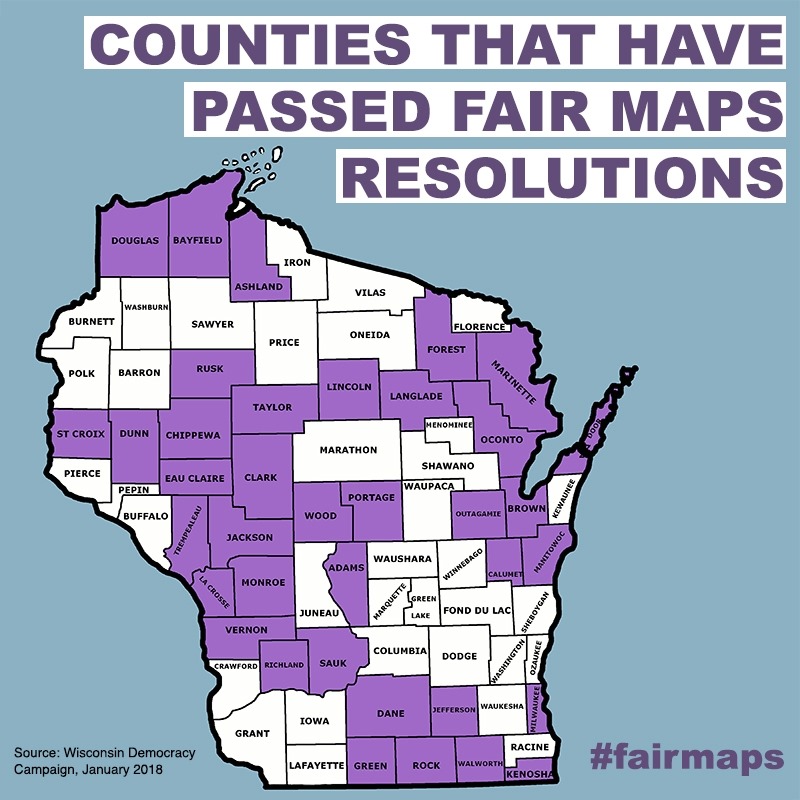 Counties that have passed fair maps resolutions (in purple).

Last week the WI Fair Maps Coalition announced that 37 Wisconsin counties have now passed a “Fair Maps Resolution” calling on the legislature to reform the legislative district map-drawing process and put an independent, nonpartisan commission in charge of this.

Those counties represent about two-thirds of the state’s population, the group noted, and more than 70 percent of these counties voted for the Republican candidate for President in 2016. The list of counties passing the resolution span the state: from Douglas and Bayfield counties in the far north to Walworth and Kenosha counties in southeast; from Marinette and Door counties along Lake Michigan, to La Crosse and Vernon counties along the Mississippi River.

Research has shown that Wisconsin is one of the most gerrymandered states in modern history. As currently drawn, the district maps enable Republicans to win a majority of Assembly seats if they get only 45 percent of the statewide vote, as Data Wonk columnist Bruce Thompson has computed.

A federal court ruled in Gill v Whitford that the state’s current legislative district maps are unconstitutional and violate Wisconsin citizens’ rights. That case has been appealed to the U.S. Supreme Court, which has yet to rule on it.

In the meantime a coalition of about a dozen good government groups, including the League of Women Voters, Wisconsin Democracy Campaign and Common Cause, have formed the Wisconsin Fair Maps Coalition, to advocate passage of a resolution demanding that the state adopt a system like Iowa’s, where maps are drawn not by legislators of either party, but by a non-partisan group. For at least two years, this effort has steadily added more counties that have passed the Fair Maps resolution.

“All across Wisconsin, people are demanding the fair drawing of political districts,” declares Renee Gasch of the Citizen Action Northeast Wisconsin Organizing Cooperative. “They are sick and tired of elected officials rigging the system so they can stay in power.”

A poll by the Democratic-leaning Public Policy Polling done last October found a large majority of voters supported non-partisan redistricting. The poll asked: “Do you think the drawing of legislative and congressional district lines should be decided by the legislature and Governor or by an independent non-partisan commission?” Just 16 percent of respondents favored lines being drawn by the governor and legislators, and 63 percent favored it being done by a a non-partisan commission.

The coalition is backing SB 13/AB 44, the bills currently introduced in the legislature to enact nonpartisan redistricting, which call for the non-partisan Legislative Reference Bureau to work with a bipartisan Redistricting Advisory Commission to create district maps that avoid gerrymandering that would benefit either party.

“No matter how the U.S. Supreme Court rules, it’s up to our elected officials to honor the wishes of the citizens of Wisconsin, and that means adopting a process of nonpartisan map-drawing like they have in Iowa,” says Beverly Speer, Outreach and Advocacy Director for the Wisconsin Democracy Campaign.

The coalition is also urging the relevant committee chairs, state Sen. Devin LeMahieu (R-Oostburg) and Rep. Kathy Bernier (R-Lake Hallie), to hold a public hearing and vote on the bill before the current legislative session ends this spring.

If you think stories like this are important, become a member of Urban Milwaukee and help support real independent journalism. Plus you get some cool added benefits, all detailed her

23 thoughts on “Back in the News: Majority Now Backs Fair Redistricting”