By Wisconsin Budget Project - Jan 26th, 2018 12:00 pm
Get a daily rundown of the top stories on Urban Milwaukee 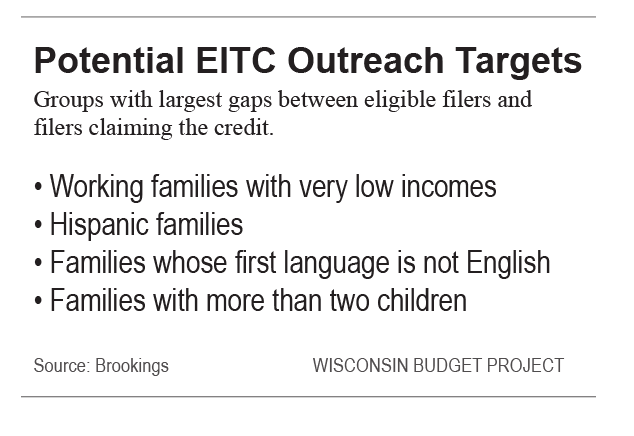 Friday is Earned Income Tax Credit Awareness Day! The Earned Income Tax Credit, also known as EITC, is tax credit for low- and moderate- income families. The credit lets working families keep more of what they earn to help meet basic needs and pay for things that allow them to keep working, such as child care and transportation. Getting the EITC can make a big difference in improving the economic security of workers and families with low incomes—yet up to a fifth of eligible taxpayers don’t claim the credit. To make sure that all workers get the credits they earn, the Internal Revenue Service has designated January 26th EITC Awareness Day.

The EITC gives a boost to workers with low and moderate incomes all across the state. In Wisconsin, 386,000 tax filers received the federal EITC for 2016, putting $863 million back into their pockets to help make ends meet. Wisconsin has its own, smaller version of the EITC, for which 246,000 working families claimed credits totaling $98 million in 2016. (Fewer workers claimed the Wisconsin credit than the federal credit because Wisconsin is the only state among the states with EITCs that limits eligibility for the state credit to workers with children).

The EITC gives a much-deserved break to working parents with low and moderate incomes, offering working parents a hand up by encouraging and supporting work. It’s a modest investment that can make a significant difference in the lives of families, especially those in rural and northern Wisconsin, who are more likely to claim the credit than families in other parts of the state.

The EITC also boosts local communities and economies. It puts more money in the pockets of low-wage workers, who then spend it at local businesses to pay for things like groceries and child care. Businesses favors the credit because it gives families additional funds to pay for necessities like child care and transportation— allowing them to be more dependable workers.

With benefits that accrue at both the family and the community level, everyone benefits when all working families who are eligible for the credit receive it. But research suggests that 15% to 20% of eligible filers do not claim the credit, translating to 68,000 to 97,000 Wisconsin taxpayers who miss out on receiving the federal credit. The largest gaps between the number of filers eligible and the number claiming the EITC occur among very-low income working families (with incomes under $10,000), low-income Hispanic families, families whose first language is not English, and families with more than two children.

To help improve outreach to families eligible for the EITC, the Wisconsin Budget Project has put together guides to help people determine whether or not they are eligible to receive the Earned Income Tax Credit, as well as other federal and state tax credits. The guides are available in English, Spanish, and Hmong. Please help get these flyers into the hands of low-income families who could benefit. The IRS EITC awareness website includes a variety of materials, social media images, and toolkits to help partners reach the broadest possible range of eligible taxpayers.

This EITC Awareness Day—and the rest of the year—let’s make sure that EITC-eligible families in Wisconsin get the credit they deserve.