We Cut 20 Tons of Carbon Emissions

By Kari Lydersen, Energy News Network - Jan 19th, 2018 01:27 pm
Get a daily rundown of the top stories on Urban Milwaukee 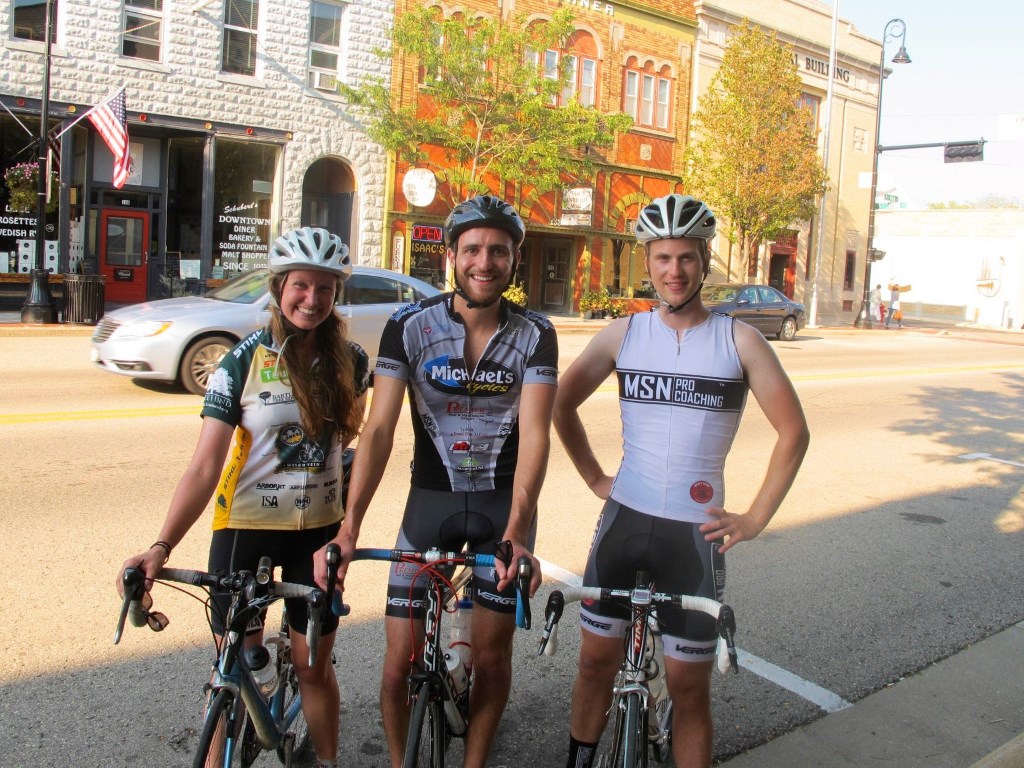 Biking to work, turning off your computer at night, flipping the light switch when you leave a room.

These are all relatively easy things to do, with the exception perhaps of biking to work on a winter day in Wisconsin. But a decade ago when a task force convened by Wisconsin’s then-governor Jim Doyle set out to make the state a leader on sustainability and energy conservation, the experts noted that changing behaviors is much more easily said than done.

“We have to think about how to change hearts and minds,” said long-time energy efficiency expert Kathy Kuntz. “How do we get people to adopt these things and make it the new normal?”

In response to a recommendation from the task force to focus on voluntary behavior-change, a nonprofit organization called Cool Choices was formed with funds from a settlement between the utility We Energies and citizen groups regarding We Energies’ Milwaukee-area coal plant.

Wisconsin Gov. Scott Walker has dismantled much of the Doyle administration’s work on climate change, including removing mention of the task force from the state Department of Natural Resources website.

But Cool Choices – “probably the last recommendation of the task force left standing,” as Kuntz puts it – is still going strong.

With Kuntz as executive director, the organization decided to use corporate partnerships and an interactive game to motivate people and companies to shift daily habits and make investments in ways that have avoided 20 metric tons of carbon dioxide emissions and saved 15 GWH of electricity, while saving participants $4.7 million, according to Cool Choices.

As Kuntz and colleagues brainstormed and researched data on social behavior around Cool Choices’ formation in 2009, they realized they had to make it “fun, social and easy” for people to develop greener habits and routines. A staffer suggested they talk to video game developers for advice on how to engage the public. Kuntz said she was skeptical at first, thinking, “This is not a game, this is the most serious issue we’ll face in our lifetime!”

But soon she was won over to the idea of a group game where people could compete with colleagues or other companies in practicing long-term sustainable behavior.

They started out with a card game in which people would draw cards offering them points for certain actions, like removing excess weight from your car, getting rid of your space heater, turning the AC up by three degrees or timing your shower. It is meant to be played in workplaces, with teams of five or six people competing against other teams and also earning their own individual scores. 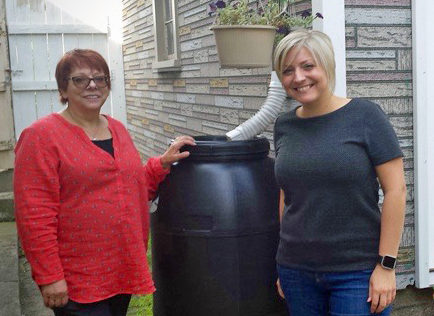 Participants in a 2016 Cool Choices program at Follett Corporation show off their rain barrel.

Soon players were able to log their activities and points online, and now the game has an elaborate online dashboard, where players draw digital cards, log their progress, virtually “nudge” team members and blog or post photos about their experiences.

The original card game debuted at Miron Construction in 2011, and since then 9,471 people have played, reporting 334,201 sustainable actions and suggesting 28,172 ways their organizations could save energy or water or reduce waste, Kuntz said. Cool Choices has also been played nationally, including by more than 1,000 employees of Wisconsin-based Menasha Corporation in 14 states.

Brigitte Dillman-Cruce is curriculum manager for sustainability for Kohler, a family company that grew from a foundry in 1873 to a suite of global brands including bath fixtures and engines.  She administered a Cool Choices game involving 690 employees from various departments.

“It was really important to us that folks on the manufacturing floor could also play, some of them don’t have a Kohler computer or login, but almost everyone has a smart phone,” she said. “It’s a very level playing field, it’s great for team camaraderie, it really builds awareness.”

One of the game cards calls for recruiting new members to the company’s green team, and Dillman-Cruce said they’ve gotten 39 new green team members thanks to the game, among other outcomes.

“A lot of people in the Midwest have extra refrigerators, those old refrigerators are huge energy sucks,” she continued. “Once you realize how much energy you could be spending on that extra beer storage, quite a few people played that card — to donate it and get a better refrigerator.”

She said that “people are lazy, frankly,” when it comes to energy conservation in the Midwest, since electricity in the region is relatively cheap.

But if Kohler employees keep up the energy saving activities they reported during the game in July and August for an entire year, they will save a cumulative $54,060, about  $92 per player, with 655,071 kWh of electricity use avoided, according to Cool Choices’ analysis.

If it plays in Waukesha…

The Cool Choices game is typically customized for different workplaces based on their needs and goals, and aimed at workplaces with 500 or more employees.  For much smaller businesses, the cost of the game is usually not viable.

But with the help of a grant from the McKnight Foundation, last fall Cool Choices hosted a county-wide game free of charge in Waukesha, a well-off area west of Milwaukee that in 2012 had more Republican votes per capita than any other county nationwide.

Laura Catherman led a team as president of the Waukesha-Ozaukee-Washington Workforce Development Board (WOW), which works with employers to find skilled employees. She said Waukesha’s unemployment rate is so low, retaining employees is crucial for many companies. She thinks the green focus and the camaraderie created by Cool Choices could help employers increase morale and retention. 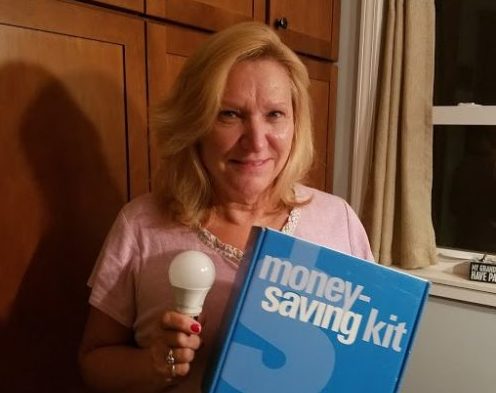 A Waukesha County participant shows off the energy-saving kit she ordered from Focus on Energy as part of the Cool Choices program. Photo from Cool Choices.

“You will see more people sitting in dark offices who are working without their lights on,” said Catherman. “Staff who I didn’t expect to be as engaged were posting photos of themselves on weekends doing something sustainable. It gave us some lasting practices that we can carry forward. From a business standpoint, conserving resources and physical supplies and energy will impact the business bottom line and help the environment.”

Lisa Geason-Bauer, who runs a sustainability-oriented marketing firm, competed against her husband in the Cool Choices game. She said she often feels like she stands out in Waukesha for her long-time dedication to sustainability, something that is not necessarily common in the politically conservative county.

“I’m a carpool queen, I drive an electric car, everyone thinks I’m a little crazy,” she said. She noted the game awards points for eco-friendly driving, avoiding “jack-rabbiting” and other gas-guzzling moves. “It educates you on how to be a more fuel-efficient driver, to make everyone drive the way I drive. It’s a culture change.”

Geason-Bauer’s company Evolution Marketing came in seventh in Waukesha County – just behind the Wisconsin Green Muslims — based on the average number of points per player that each team logged. The winner was MSI General Corporation, a major architectural design and building construction firm. Waukesha County’s Green Team took second.

Ken Neitzke was captain of one of the MSI teams, while his wife was on the Waukesha County Green Team. He noted that along with individuals changing their behavior, the company improved its sustainability practices and asked subcontractors to prioritize energy efficiency in their work.

“Energy efficiency seems a little more elusive, people don’t quite understand it, especially when they’re not the ones paying the monthly energy bill,” said Neitzke, a senior designer at MSI. “They don’t understand the impact is not just their monthly bill but it’s regional and global. It’s just a matter of educating everybody. People might get bored with all these messages thrown at them, but Cool Choices puts a fun twist on it.”