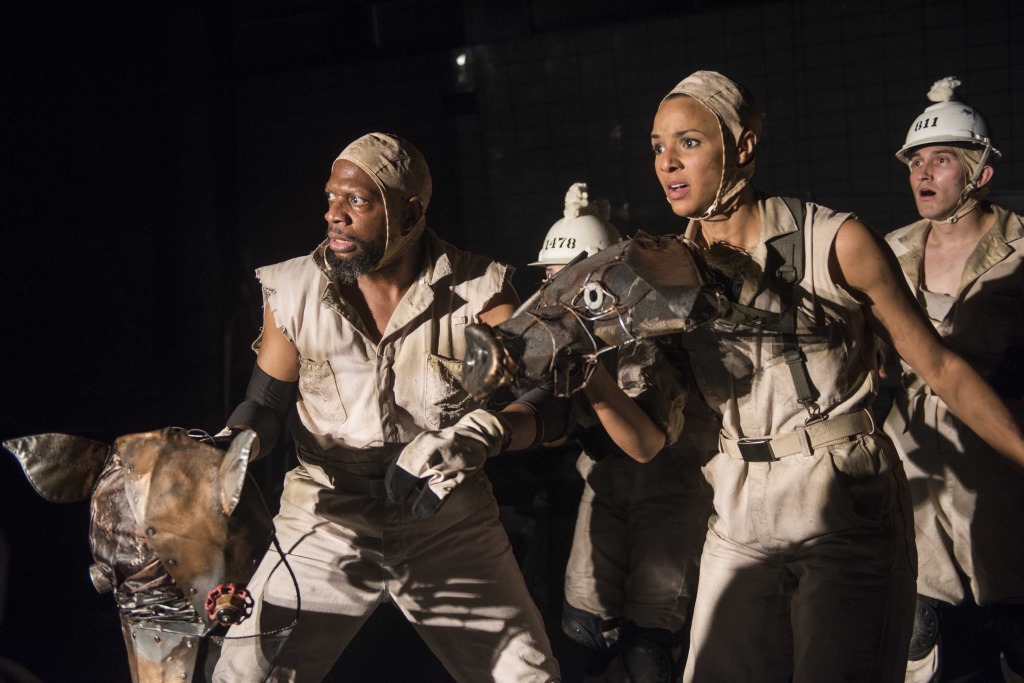 A disillusioned socialist named George Orwell, infuriated by Stalin and the West’s embrace of him in the 1940s, created a satirical fable where the animals revolt against the farmer and then let the pigs rule with more cruelty and greed than the humans. The novella Animal Farm and its thinly disguised look at the Russian Revolution became one of the great allegories of literature and a bleak biting parable for the ages.

The Milwaukee Rep’s main-stage production brings a different kind of disillusion: fears that the story is such heavy going because Orwell’s work was overrated and our society has moved too far along to accept his rudimentary examples though we understand his message. Not so. The failure is the Rep’s.

It may be true that anthropomorphic parallels — animals mimicking people and vice versa — are more common in this era’s deluge of animation films and that a theater audience – through February 11 at the Quadracci Powerhouse – is faster these days to get the hints. Certainly the production had to be aware of such new realities.

But the pleasure of both literature and theater is in the journey. Orwell was a master writer who painted a world as well as an allegory. In the novella we still recognized our world in his.

The Rep may be attempting the same thing, but it comes across pedantic and preachy, a misuse of a capable ensemble, some fine music interlays and costume designer’s Izumi Inaba’s efforts to simulate animals via actors holding masks and tails – with some hand flapping and Muppet-style maneuvers for the bird kingdom. The actors still have a way to go to always be clear about who is talking as what, but that shouldn’t lead to so plodding a pace.

I’ve admired May Adrales’ direction on other Rep stages and her addition as associate artistic director. But this turns out to be a sad directorial debut on the main stage, largely because we have seen much better examples of this kind of “lesson play.” The end moral is equally obvious in Mother Courage, The Caucasian Chalk Circle, The Measures Taken and other works from the theater school of Bertolt Brecht, which I assume adapter Ian Wooldridge was partly emulating, while allowing each director to create the environment. Here it is the image of a slaughterhouse where the animals seem from the start to be human slaves. But this visual idea is matched by only feints in the stylistic behavior of performers.

This production also fails to hone in on what I suspect was one of Adrales’ desires — Orwell’s warning that education or the lack of it is what does the animals (people) in.  In this production that thread becomes a blur, no more important than the handling of animal masks or barnyard chorales.

Brechtian theater can still provide a haunting experience, but this is an example of neatly coordinating the elements, moving the cast in and out nimbly so we don’t notice the double casting — but rarely sparking life into the choices made by the actors. And these are some good ones.

Anyone who has attended Milwaukee theater knows the magnetic capabilities of Deborah Staples, but she must use every ounce of her sorrow and suffering repertoire in the finale as Clover, the barely surviving horse.

Vocally strong work with a less annoying sense of repetition is put in by Stephanie Weeks as both the inspirational Major the boar and the not-so-bright harness horse Boxer.

Melvin Abston doesn’t play with all the possibilities of both his main parts –all the actors are also active in the ensemble — but has some boisterous turns as Napoleon the pig king and some creepily inventive ones as Moses, the preacher as a raven. Tiffany Rachelle Stewart pulls two swaggering extremes out of her acting bag as the flirtatiously vain Mollie the cow and as Squealer the officious apparatchik, but her liveliness and sarcastic manner actually turn out to be welcome live buttons. They hint at another kind of acting than declamation and ritual episodes to spark the events.

Certainly, there can be visceral and visual punch in allegorical theater. But the audience is way out in front in this barnyard chase. 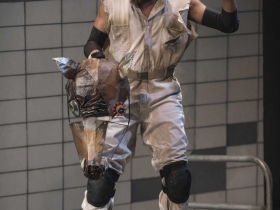 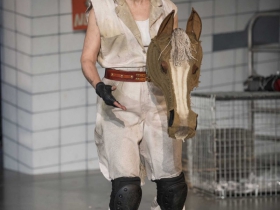 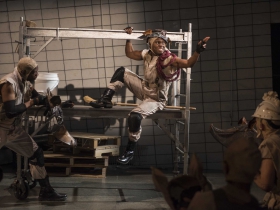 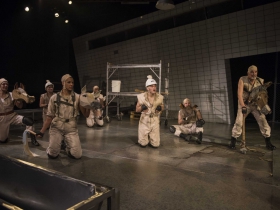 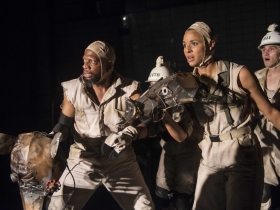 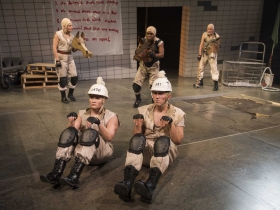