Sykes, Clarke Still Hate Each Other

Sykes keeps attacking his old pal, while Clarke is muzzled by Twitter. 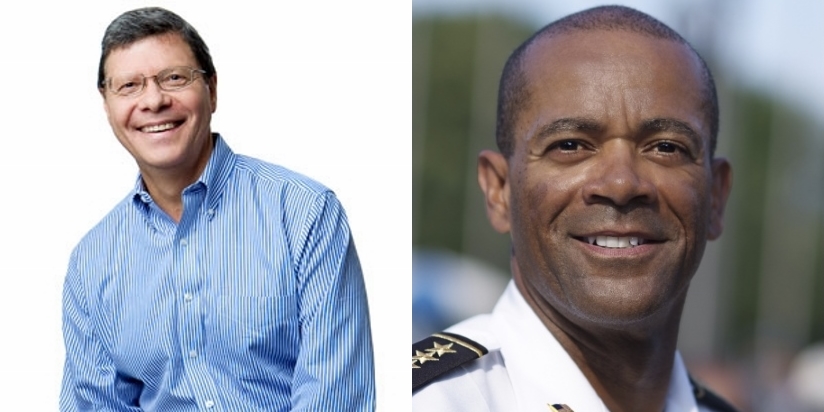 Charlie Sykes began the new year just like he ended the old one, by blasting his old buddy, ex-lawman David Clarke.

On January 1 he tweeted this: “Former Sheriff David Clarke, who refers to Black Lives Matter as ‘black slime,’ presided over multiple deaths in his Milwaukee jail and once threatened to ‘knock out’ a man who accused him of harassment, remains a rock star on the right.”

His blasts at Clarke prompted this challenging tweet from a follower: “Didn’t you used to have on your radio show all the time? Wasn’t he one of your favs, once upon a time?” To which Sykes responded: “My biggest regret.”

Ah yes, Sykes is a longtime expert at recanting his views, having been frequently rewarded for these dramatic qualms of conscience, including for his flip-flop on once-beloved soul mate David Clarke. During the 15 years Clarke served as Sheriff, he was frequently and fawningly interviewed on Sykes’ radio show and touted on Sykes’ Sunday morning TV show. But after 15 years of this incessant promotion, Sykes suddenly came to the realization he was wrong, oh-so-wrong about the outspoken law man.

Just how wrong was Sykes? Let him explain:

“I do think that Sheriff Clarke in the last year has really sort of beclowned’ himself, and I refer to him as kind of ‘my Frankenstein monster’”, Sykes explained to MSNBC last year. “There was a time when Sheriff Clarke had some substantive things to say, but clearly the ego and the big hat, I think, have gotten the best of him.

No one, of course can remember Clarke’s big hat and big ego, or lack of substantive things to say during the 15 years Sykes idolized the Sheriff. No, this shocking change by the Sheriff all happened in the last year, by coincidence just at a time when Sykes was trying to prove his newly moderate views to MSNBC and the New York Times.

Or as Sykes put it to WUWM: “As many strengths as David Clarke had, in terms of highlighting certain issues, his indifference to his day job really was becoming a significant problem, or had become a significant problem with the lawsuits, the deaths in the jail, some of the other practices. And I think this will become a good opportunity for everybody to turn their page…”

Or at least the perfect time for Sykes to turn the page.

Meanwhile, Clarke has seemingly had nothing to say about Sykes in response.

Yes, Clarke goaded Sykes after the election of Donald Trump, with this emailed taunt: “You embarrassed yourself over the last 6 months. Your hubris and your ego got the best of you…I will enjoy listening to your program again for the next 2 months explaining how Trump could NEVER become POTUS.”

But Clarke hasn’t had much to say about Sykes in the last year, and on January 2 was shut down by Twitter. Clarke was temporarily blocked from tweeting “after Twitter users’ complaints alerted the company that three of his messages violated the terms of service,” CNN reported. “Clarke was placed in read-only mode until he deleted three tweets that seemed to call for violence against members of the media.”

One of those tweets said this: “When LYING LIB MEDIA makes up FAKE NEWS to smear me, the ANTIDOTE is to go right at them. Punch them in the nose & MAKE THEM TASTE THEIR OWN BLOOD. Nothing gets a bully like LYING LIB MEDIA’S attention better than to give them a taste of their own blood #neverbackdown.”

Adding to Clarke’s troubles, an investigation of the infamous incident where the Sheriff sent deputies to harass a fellow passenger, Dan Black, on a plane flying from Dallas to Milwaukee found Clarke had abused his authority, as the media recently discovered from a case file. A federal investigation of Clarke took no action, but the Audit Services Division of the Milwaukee County controller’s office determined that Clarke had “used his official position as sheriff of Milwaukee County in excess of his lawful authority to direct his deputies to stop and question Black without legal justification.”

Clarke had threatened to “eliminate” Dan Black and his threats of violence have gotten even more extreme since he left office, resulting in Twitter dumping him. Clarke had to delete the offensive tweets, and is now back on twitter, but you wonder if he is wearing out his welcome with the mainstream media after posting such inflammatory remarks.

Still, there’s no need to feel sorry for Clarke, as he is enjoying a nice annual pension of just over $100,000 a year, as Dan Bice has reported at the Journal Sentinel. About two-thirds of that is from the city for his years as a police officer, with the rest coming from the county for his service as Sheriff.

Given that Clarke has been so silent in response to Sykes, you might wonder why the latter is so consumed with slamming the ex-sheriff. Guilty feelings about all those years of supporting an obvious demagogue? You be the judge.

34 thoughts on “Back in the News: Sykes, Clarke Still Hate Each Other”