By Isiah Holmes, Wisconsin Examiner - Dec 29th, 2017 12:59 pm
Get a daily rundown of the top stories on Urban Milwaukee 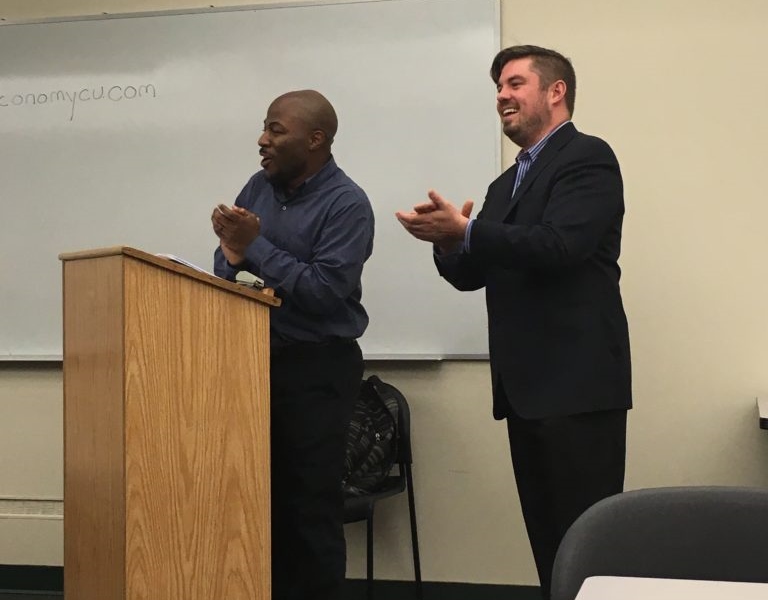 Milwaukee neighborhoods in the 53212 zip code are posed for a new and intriguing twist in banking options. In early December, the New Economy Credit Union (NECU) elected a board of directors and announced it is seeking official state approval. Digging its roots in neighborhoods like Harambee and Riverwest, the new project aims to establish a “community organizing credit union,” its founders say.

In creating the New Economy Credit Union, its founders needed to select a prime area. According to organizing committee member Alex Brower, ideal locations were areas in need of more capital, and the 53212 zip code clearly qualifies. It is a lower income area of Milwaukee, meaning it also ranks low statewide. According to data on the city by zip code, the unemployment rate for the 53212 area ranges from 14 to 16 percent. That’s higher than many other Milwaukee zip codes, which are typically around 5-7 percent, though lower than some particularly impoverished zip codes, where unemployment topped 18 percent.

NECU’s founders also like the area’s diversity and high population density. African Americans account for around half of the residents in 53212, with significant populations of whites and Hispanics, along with Asians, Native Americans, and mixed races. That positive, however, is tainted by decades-old symptoms of segregation such as the Holton Street dividing line, which acts as a racial border, NECU leaders note.

But all residents have in common a need for a low-cost banking option.

“What we’re trying to do with this credit union,” organizing committee member Brower told Urban Milwaukee, “is bring affordable credit to the neighborhoods here” and “support community control of finance as well.” The organization seeks to build strong grass roots connections with all residents in the 53212 community.

The credit union’s main competitor is big, for-profit banks based outside the neighborhood and often outside the state; by contrast, credit unions are non-profits and this one will be hyper-local — neighborhood-based. By focusing on building community capital and working with co-ops and community leaders, New Economy hopes to uplift the area by keeping local money recirculating within the neighborhood. Eventually, the credit union could provide affordable loans and credits for small businesses and homeowners.

“The third part of our mission,” Brower says, “is we’re going to be organizing our community to stand up to the power of the bankers of Wall Street and the richest one percent.” It’s a line not normally seen from a bank, crossing into community activism. Brower notes that the “activist cultures” of the Riverwest and Harambee neighborhoods have been of great help in that regard.

“People in the neighborhood want to see change in the way things are,” Brower tells Urban Milwaukee. The New Economy Credit Union plans to position itself as “a vehicle by which regular people can challenge the power of existing corporations.” Brower adds that the problem isn’t necessarily the people who run these corporations, but “the fact they have so much power over what goes on in our economy.”

While the state reviews NECU’s request for approval, the committee is launching a fundraising effort. The goal is to raise $300,000 from community donations, no small challenge. To that end, all groups, persons, businesses and co-ops with connections to the 53212 zip code will be tapped for fund raising. A portion of the fundraising total, Brower notes, would initially need to be borrowed.

Credit unions have been growing across Wisconsin, reaching 3 million members, according to the Milwaukee Journal Sentinel, a 40 percent increase over the past decade. Still, they serve a small percentage of state residents, with a single credit union, the $3 billion Landmark Credit Union based in New Berlin, serving 10 percent of the state’s credit union members.

The New Economy Credit Union, should it meet its fundraising goal, is likely to be a tiny addition to the roster of state credit unions, but could have a big impact on the targeted neighborhoods. Issues like poverty, unemployment, and opioid-related overdose deaths are ever present in the area, and a strong credit union could help combat this, by building the local economy and creating new homeowners, businesses and jobs.