Blacks now have twice the college debt of whites; GOP tax plan would widen the gap.

By Tamarine Cornelius, Wisconsin Budget Project - Dec 13th, 2017 11:51 am
Get a daily rundown of the top stories on Urban Milwaukee

Now that the Senate and the House of Representatives have each passed their own versions of a federal tax plan, they will try to reach agreement on a single plan for both houses of Congress to approve. The two tax plans are more alike than dissimilar – both hike taxes on a sizeable number of taxpayers with low and moderate incomes, give the richest extremely large tax cuts, and favor corporations over individuals and families.

One difference between the two plans is that the House version includes provisions that would push higher education out of reach for many students, by raising the cost of obtaining a college degree and blocking one of the main pathways students take to financing advanced degrees. Whether these measures will wind up in the final version of the tax bill is anyone’s guess, especially given that the extremely rushed process Congress has engaged in so far in the tax debate has limited the opportunity for taxpayers to weigh in on various aspects of the bills. But considering that the House approved a version of the bill including these harmful changes to higher education – with Wisconsin Republicans Paul Ryan, Jim Sensenbrenner, Glenn Grothman, Sean Duffy, and Mike Gallagher all voting in support — they could well end up in the final version of the bill and written into law.

There are two main ways the House GOP tax plan raises costs for college students and makes it harder for students with limited resources to earn degrees.

1. The bill eliminates the student loan interest deduction that allows people paying off student loans to subtract the first $2,500 of interest costs from their incomes before calculating the amount of tax they owe. Taxpayers with student loans can save up to $625 a year from this deduction. This change would increase taxes for student loan borrowers by about $24 billion over the next decade.

Ending the student loan deduction would hit close to home for Wisconsin students, making it harder to afford the cost of college. Nearly two-thirds of students in UW institutions take on some level of debt.

African American students would be particularly hard hit by the elimination of the student interest loan deduction, as they are typically burdened by larger debt loads than are white students. Black students often come from families with lower incomes than white students and have access to less in the way of family wealth, leaving borrowing as one of the few methods available to finance their education.

As described by a Brookings report:

“The moment they earn the bachelor’s degrees, black college graduates owe $7,400 more on average than their white peers ($23,400 versus $16,000, including non-borrowers in the averages). But over the next few years, the black-white debt gap more than triples to a whopping $25,000. Difference in interest accrual and graduate school borrowing lead to black graduates holding nearly $53,000 in student loan debt four years after graduation – almost twice as much as their white counterparts.”

The student interest loan deduction doesn’t do much to correct the fundamental economic imbalances that compel black students to borrow more than whites and make it harder for them to pay back the debt – but eliminating it would make the problem worse, and raise the costs for African American students to attend college. 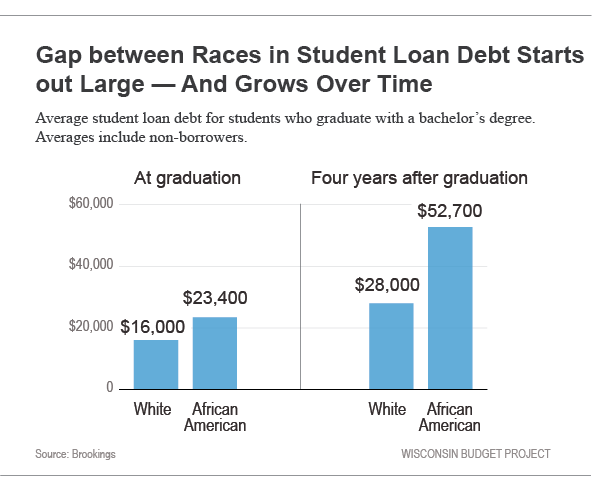 2. The House GOP tax plan would dramatically increase taxes for students studying for advanced degrees. Students pursuing advanced degrees are often given a small stipend and free tuition (sometimes referred to as tuition remission) in exchange for teaching classes or doing research. The tax plan passed by the House would force students to pay taxes on the value of the free tuition as if it were income.

Some graduate students have calculated that this change would increase the amount of income tax they owe by 200% or more, making it much more expensive for students to pursue advanced degrees.

In a letter to students and faculty, the University of Wisconsin-Madison describes the harm that would result from repealing the exemption for tuition remission:

“A repeal [of the exemption for tuition remission] would lead to a completely unaffordable increase in taxable income and make the pursuit of a graduate degree much more challenging, if not impossible, for a large number of these students. In turn, this would greatly damage our nation’s scientific research enterprise. [Exempting tuition remission] is critical for developing the science and technology workforce pipeline that employers need to propel our nation’s economy forward.”

Like the elimination of the student loan interest deduction, the proposal to make it more expensive to attain an advanced degree would do particular harm to students of color. An editorial by Steven W. Thrasher in the New York Times warns:

“If included in the final tax plan [taxing tuition waivers] would disproportionately harm nonwhite graduate students and be disastrous for the already dismal diversity of academia, putting an additional roadblock between people of color and the ivory tower and depriving all of us of their desperately needed intellectual contributions…

One thing that has been at least somewhat helpful at redressing enormous structural racial barriers is the way some modern Ph.D.s are funded. As the National Science Foundation noted in June in its Survey of Earned Doctorates, ‘a growing proportion of students over the past 10 years has relied on research assistantships and teaching assistantships for their financial support during graduate school.’

This model, which House Republicans have proposed effectively taxing into elimination, was the only way a doctoral education was possible for me.” (A Republican Tax Proposal Would Make Academia Even Whiter, Nov. 29, 2017).

Congress should be working to make higher education more affordable for everyone. Instead, Congress is considering changes that would push college and advanced degrees out of reach for many low-income students and especially African American students. Unfortunately, these provisions are in the same spirit as many of the other components of the proposed tax bill, which would raise taxes on a significant number of low- and middle-income taxpayers, give outsize tax cuts to corporations and the very wealthy, and make it harder for Wisconsin taxpayers to achieve economic security. The Wisconsin Budget Project website has more about how the federal tax plans would affect Wisconsin taxpayers.