Who Benefits From Federal Housing Subsidies? 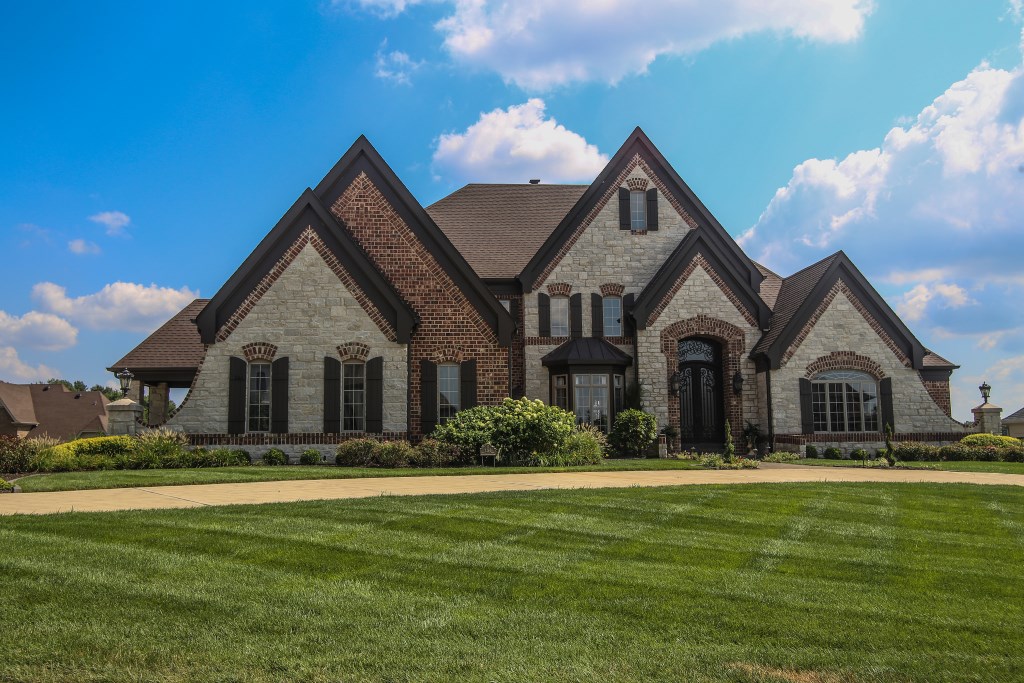 Matthew Desmond’s recent book Evicted, based on Milwaukee, has drawn attention to the plight of poor people whose rent consumes most of their income. This often leads to evictions and the inability to afford other necessities, including food and utilities. Desmond’s book follows two Milwaukee landlords and struggles of their tenants to pay the rent,

Desmond’s penultimate chapter, “Epilogue: Home and Hope,” argues that the problems he describes could be substantially ameliorated by expanding an existing federal housing program. Called “Section 8,” it operates on the principle that no one should be forced to spend more than 30 percent of their income on housing. If rent and utilities take up more than 30 percent of a participant’s income, a Section 8 voucher pays the difference.

The problem is that Section 8 funding is far short of what is needed to offer vouchers to everyone who qualifies. In most places, there is a substantial waiting list for vouchers, and many waiting lists are closed.

In Milwaukee County, for instance, the program helps pay for rent in 1,800 units, but the waiting list is 1,705 and has been closed since July 2016. In Milwaukee County people who are homeless go to the top of the list. As Desmond documents, many of the people unable to get vouchers will themselves become homeless as a result.

A recent study from Apartment List, a website which aggregates apartment listings from around the web, compares spending on two federal programs that subsidize housing costs. One is the mortgage interest deduction that allows taxpayers to deduct from their taxable income the interest they pay on home mortgages. The second is Section 8 housing vouchers. 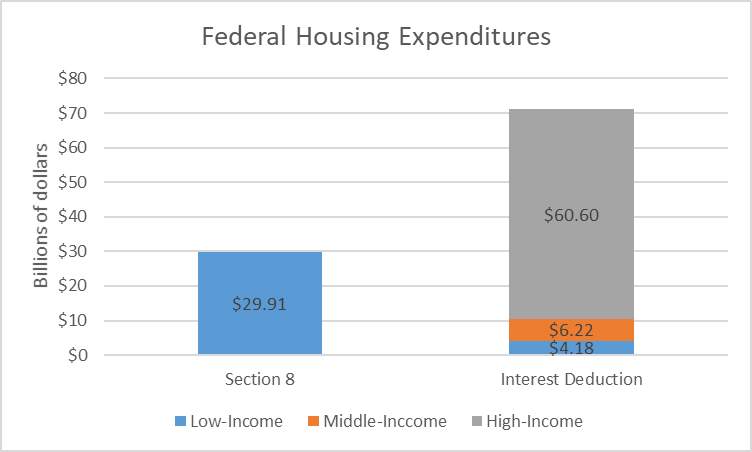 Using data published by the US Department of Urban Development, Apartment List calculated the voucher amount for each county in the US. It used the IRS’ Statistics of Income database to calculate the mortgage income deduction by income. It defined middle-income people as those making 80 percent to 120 percent of the median area income.

The next chart shows the average total housing subsidy per household in Milwaukee County (in blue), Waukesha County (in rust), and the whole US (in gray). Apartment List calculated these by taking the total spent by the two programs on low, middle, and high-income households and dividing that by the number of households in each of the income groups.

The next chart shows the share of low, middle, and high-income households receiving any federal housing benefit. Contrary to the wide-spread view that government benefits flow mostly to poor people, wealthy Waukesha County households are those most likely to receive a federal housing subsidy. 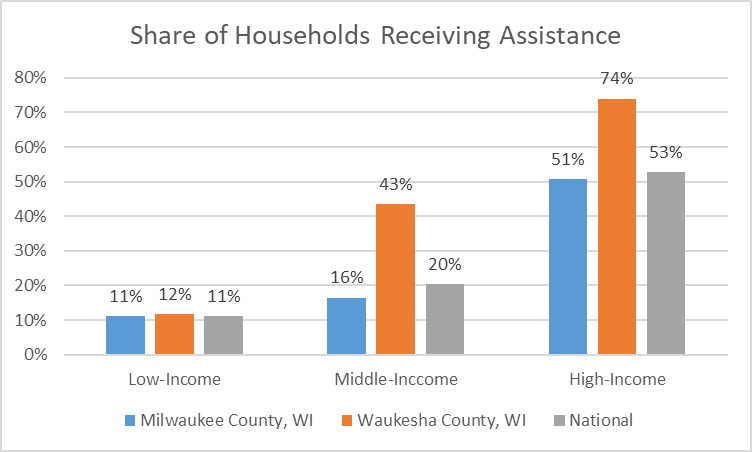 Apartment List’s analysis of who benefits from the mortgage interest deduction are consistent with others. The next chart summarizes the Tax Policy Center’s analysis of the mortgage interest deduction. The vertical bars (using the left axis) show the percentage of taxpayers claiming the deduction. Among the wealthiest 10 percent, practically everyone takes it. Likewise, the value of the deduction (red line and right axis) rises steadily with income. 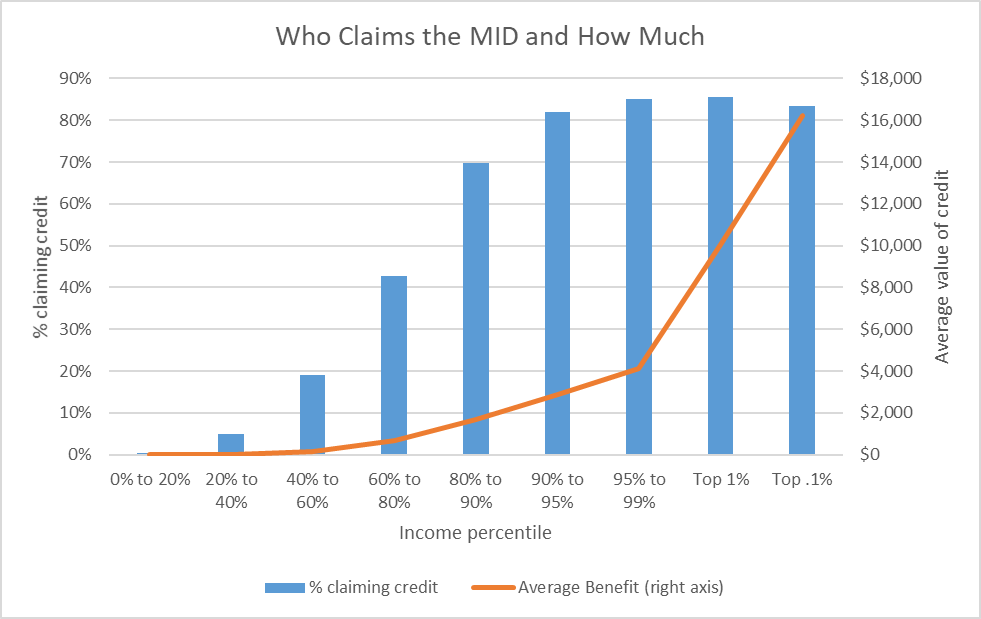 Who Claims the MID and How Much

The tax reforms of the 1980s eliminated deductions for most kinds of interest. It was feared that being able to deduct interest encouraged people to go into debt, rather than build up savings. The mortgage interest deduction was the sole survivor. It was argued that encouraging home ownership had social benefits, helping build strong communities.

Recently, however, there is growing concern that home ownership may have adverse effects. Owning a home may make one more reluctant to move from an area with high unemployment to one with more jobs if that means taking a loss on your house.

This would suggest the goal of government policy should be less that of incentivizing house purchases than helping those struggling to afford housing of any sort. As currently designed, the mortgage interest deduction serves mostly people who do not need help with housing costs.

Two changes to the interest deduction would help address this imbalance. One is reducing the current $1 million cap on mortgages. Another is eliminating the deductibility for second homes. Both would help make the deduction less regressive and free up funds to help more low and middle-income people. Converting the deduction into a tax credit would provide tax relief to middle and low-income homeowners with mortgages regardless of income.

These reforms could free up funds to expand rent vouchers to everyone whose rent takes up more than 30 percent of their income. In its introduction to the housing voucher program, the Center on Budget and Policy Priorities estimates that only one in four households that are eligible for vouchers receive any form of federal housing assistance. Based on a HUD analysis of Census data, the CBPP reports that in 2005, 6.5 million low-income renter households that did not receive housing assistance had “severe housing problems” — they either paid more than half of their income for rent and utilities or lived in severely substandard rental housing. According to one estimate, 45,481 renters spend over half their income on housing in Wisconsin’s fourth congressional district which includes Milwaukee.

What are the chances for a reform in federal housing subsidies? There are reasons to be pessimistic. The Trump administration and Republican leadership recently issued a nine-page Unified Framework for Fixing Our Broken Tax Code.

Although vague on many details, the framework lists business incentives for low-income housing and for home mortgage interest among things it plans to preserve. It pledges that the result will be at least as progressive as the existing tax code—that it will not shift the tax burden from high-income to lower- and middle-income taxpayers.

The specific details included in the framework, however, raise doubts about that. Among proposals having the effect of reducing taxes on wealthy people are lowering the top marginal rate, eliminating the alternative minimum tax and the estate tax, and introducing lower rates on certain forms of income such as that from pass-through corporations.

A Tax Policy Center analysis of the Framework, using earlier Paul Ryan proposals to fill in the gaps, concluded the benefits would be largest for taxpayers in the top 1 percent. According to the TPC, the federal deficit would increase by $24 trillion over the first decade and by $32 trillion over the following decade.

… the G.O.P. lurched away from the middle class in a more stark way than it ever did under Reagan or Bush or the Newt Gingrich speakership, embracing theories about how the working class was actually undertaxed, rallying around tax plans that seemed to threaten middle-class tax increases and promoting an Ayn Randian vision in which heroic entrepreneurs were the only economic actor worth defending.

The reaction to the TPC report was swift and vicious. Business Insider reported that Kevin Hassett, chair of Trump’s Council of Economic Advisors, attacked the TPC at an event hosted by the center, saying:

I’m sure many people in these halls have been struck and perhaps even dismayed by the tone and pushback from around Washington regarding the Tax Policy Center report. I think that’s what happens when you behave irresponsibly.

Hassett also said the report contained “imagined numbers” and he did not “understand the purpose of the document.”

Business Insider also quoted Paul Ryan on Fox News: “It’s very predictable coming from this group. I think the Wall Street Journal got this right when they said this is an anti-reform, propaganda group.”

Recently, Treasury Secretary Steven Mnuchin took a different tack. According to Politico, Mnuchin argued that cutting taxes on the wealthy was unavoidable:

For those concerned about making housing affordable for low and middle-income people, the pessimistic interpretation is that any such proposal would have rough sailing given the evident desire of the Trump administration and the Republican legislative leadership to give wealthy people a tax break.

However, the attacks on the Tax Policy Center suggest they are sensitive to the charge that “tax reform” means a tax cut for the rich, but don’t know how to avoid doing so, as suggested by Mnuchin. If so, embracing proposals that make housing affordable would serve their interests.