Does UW System Have Too Many Colleges?

Cross addresses what’s long been whispered: 26 UW institutions is too many. 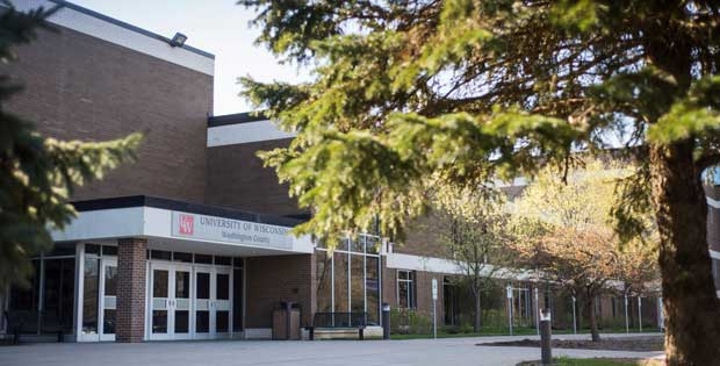 For more than a year, University of Wisconsin System President Ray Cross and system administrators looked at options for the 13 two-year colleges that help anchor smaller communities like Rice Lake, Baraboo, Richland Center and Marshfield.

These two-year institutions help students decide whether the college experience is for them, without having to move into dorms and pay much higher tuition at one of the four-year universities. Half of all these students attend part-time, and one in five is 25 or older.

But enrollment at the colleges has plummeted: six of the 13 have lost more than 40 percent of their students since 2010. Two of them – Manitowoc and Wausau – lost more than half.

The enrollment dip and shift to on-line learning looked permanent. “By 2040, nearly 95% of total population growth in Wisconsin will be age 65 and older, while those of working age 18-64 will increase a mere 0.4%,” a UW System statement explaining the plan said.

And, because colleges’ faculty members do not generate major research grants like some on four-year campuses, the colleges are more dependent on tuition. But tuition had been – and will remain – frozen.

Would state government invest more in the colleges? No. State aid for the entire $6 billion UW System budget has been, and will remain, about $1 billion per year. The colleges had a total budget of $146 million in 2015-16, or 2 percent of System’s budget.

Close the colleges? “No – please no!” said community and government leaders in those 13 communities who are struggling to keep them economically viable.

Merge the UW colleges with the 16 technical colleges? No, or at least not yet. The colleges have a liberal arts-mission that offers students a pathway to the four-year UW universities. The technical college system is focused on preparing students for the changing workplace.

Besides, the UW and technical college systems have separate governing structures, so elected officials in the Capitol would have to approve any merger. That last time a merger that politically messy happened was 1971, when the UW System was created by merging larger universities in Madison and Milwaukee with the “state colleges.”

All of this explains why Cross is asking the Board of Regents next month to tentatively approve his plan to “realign” the 13 colleges with eight of the four-year universities, effective July 1.

Under that plan, both UW-Washington County, which saw an enrollment drop of 36 percent, and UW-Waukesha, which lost 29 percent of its students, would become part of UW-Milwaukee.

In a statement, UW-Milwaukee Chancellor Mark Mone said many merger details are unknown, but it has exciting possibilities: “Historically, UWM has had more students enroll from Wisconsin than any other institution, and we already draw many students from UW-Waukesha and UW-Washington County…Thus, this action is an extension of our long-running commitment to serve students from the state to earn four-year degrees.”

He added: “We will be looking closely at how we can both serve the additional students while maintaining our status as a top-tier research institution.”

Yes, Cross conceded in a WisconsinEye interview, there will be growing pains. It may take two years to sort out what classes are taught on which campuses, and who teaches them. One example of those growing pains: A Legislative Fiscal Bureau summary said professors on four-year campus were paid an average of $129,500 per year in 2015-16 – double the $62,300 paid the typical professor on a two-year campus.

Because merging will be hard, campus leaders will have “as much latitude as possible,” Cross noted, and can even consider post-merger name changes. For example, the new merged institution made up of what is now UW-Oshkosh, UW-Fox Valley and UW-Fond du Lac may want to call itself “Fox Valley University,” he added.

Two regional leaders had different reactions to the realignment.

Local leaders “are distraught by the proposed reduction in local control over the UW-Barron County campus that their community built and pays for,” Bewley said. “What this plan says to the young people of northern Wisconsin is, ‘Look south,’ and that’s not right.”

But Cross said many UW-Barron County students transfer to UW-Eau Claire and the two campuses are connected by a four-lane Highway 53.

In a separate interview, David Eckmann, president of the Wausau Region Chamber of Commerce, praised folding UW-Marathon County into UW-Stevens Point. That will ultimately strengthen programs on the Wausau campus, Eckmann predicted.

Cross is saying what many had whispered for years:  A UW System with 26 separate institutions is unsustainable. Cross survived service in Vietnam. He’ll survive this fight.