The Lessons of Repeal and Replace

Republicans never had an actual plan. Bernie Sanders might learn from that.

The repeated failure by Republicans to repeal Obamacare or agree on its replacement offers lessons for both the GOP and Democrats. Before promising to junk something make sure you have a viable alternative.

One problem is that all the GOP alternatives would have taken away health insurance from at least 14 million Americans, and as many as 32 million long-term, as the chart below shows, based on analysis by the Congressional Budget Office (CBO). Shown in chronological order, the list starts with the version of the American Health Care Act (AHCA) that Congress passed multiple times knowing it would be vetoed by President Obama. This was followed by an amended version that was killed in the House, only to be revived and sent to the Senate in the hope its flaws would be fixed. The four clusters on the right show the estimated people losing insurance for each of the unsuccessful Senate proposals. 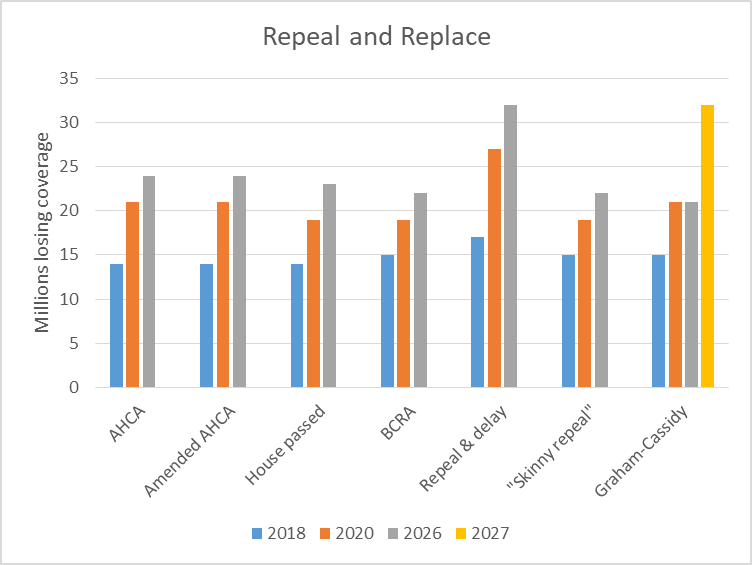 The consistency of insurance loss over the various proposals might suggest all act in the same manner. Yet the specific reasons for the loss vary from one proposal to another.

For instance, under a bill eliminating the individual mandate while keeping the prohibition on considering preexisting conditions, healthy people might put off buying insurance. This would result in a sicker population and higher premiums. Conversely, if insurance companies could adjust prices based on an applicant’s health, less healthy people might be priced out of the market.

The last proposal, the Graham-Cassidy bill, would turn management of health insurance over to the individual states, which would receive federal block grants. The CBO concluded that the “number of people with comprehensive health insurance that covers high-cost medical events would be reduced by millions,” under this bill but “could vary widely depending on how states implemented” it. Because of that uncertainty the CBO needed more time to arrive at specific numbers.

The numbers for this bill shown come from the Brookings Institution. It started by identifying four strategies state could adopt. By matching each state strategy with one of the proposed ACA replacements analyzed by the CBO, it estimated the national decline in enrollment. In 2017 Graham-Cassidy ends the block grants accounting for the jump in the number of uninsured.

The chart below, based on data from Gallup, compares each state’s uninsured rate in 2013 (on the horizontal axis) to its rate at the end of 2016 (on the vertical axis). States that expanded Medicaid are shown in blue; those that did not in red. 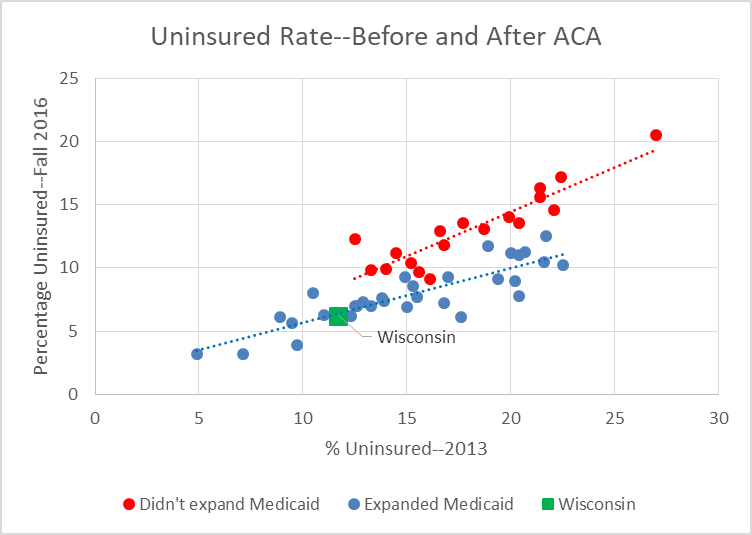 Uninsured Rate–Before and After ACA

Since the ACA the number of people without insurance decreased, and it went down more in states that expanded Medicaid. The chart also suggests an empathy gap between states. States with already lower uninsured rates were more likely to expand Medicaid.

Wisconsin is something of an anomaly. Just taking the uninsured rate into account, it looks more like the states that took federal aid to expand Medicaid. Wisconsin did this by removing Medicaid recipients who qualified for subsidized insurance on the Obamacare marketplace. Doing so made room for people previously excluded from Medicaid, mostly adults without children. Although the results were similar to expansion states, the cost to Wisconsin taxpayers was substantially greater.

During the Obamacare fight, Wisconsin Senator Ron Johnson gained positive publicity by criticizing the process to ram the ACA replacement bill  through the Senate with little analysis of its implications. However, his substantive beef was that the proposal did not go far enough in removing consumer protections such as the pre-existing condition rules.

Johnson was one of the four sponsors of the Graham-Cassidy-Heller-Johnson Amendment, the last attempt to replace the ACA by turning Medicaid into block grants to states. His Senate website brags about having introduced “the Truth in Obamacare Accounting Act, which would have required the Congressional Budget Office to estimate the cost of implementing the law and how much it would add to the deficit.” He fails to mention that the CBO found a complete repeal of Obamacare would have substantially increased the U.S. budget deficit.

The Republican establishment has created a trap for itself. To satisfy its most ideological members, any replacement would have to take insurance away from millions of Americans—or make it much worse. Yet that contradicts what they promised the voters. As Trump repeatedly promised before and even after the election:

We’re going to have insurance for everybody. There was a philosophy in some circles that if you can’t pay for it, you don’t get it. That’s not going to happen with us. … It will be in a much simplified form. Much less expensive and much better.

Politically this magical promise served Republicans well, until they were forced to make it come true.

Trump’s strategy, if one exists, seems to be sabotaging the ACA and hoping voters will blame the law for higher prices, rather than the administration in charge of the law. The administration slashed funding for advertising the exchanges and for paying agencies that help people get insurance. It also cut the enrollment period in half, and plans to shut the enrollment website on most Sundays.

The administration has still not committed to reimbursing insurers for their required coverage of co-pays for low-income patients. The studiously nonpartisan CBO estimates this uncertainty adds an extra 20 percent to 2018 premiums.

The likely result of these actions are higher premiums since unhealthy people are most motivated to overcome the barriers. The result is a less healthy and more expensive pool of customers.

There are some signs that efforts at sabotage are having an effect. The next chart compares the CBO’s most recent estimate of enrollment in the individual health insurance market, shown in orange, to the previous estimate, shown in blue. 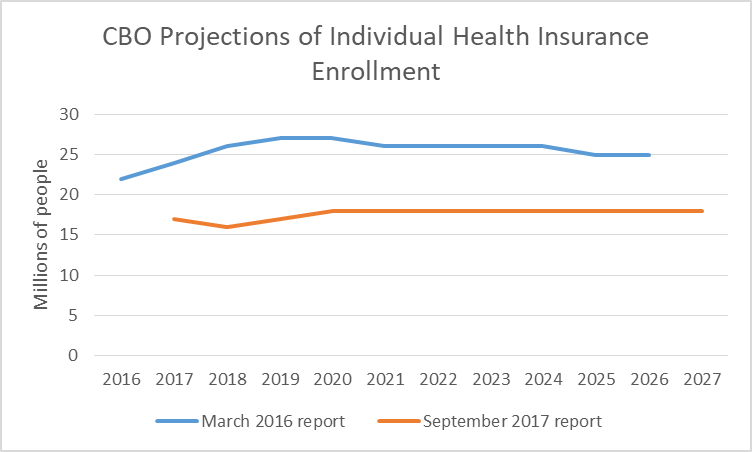 Another hint that sabotage is working is the recent Gallup report that the percentage of U.S. adults without health insurance grew in the second quarter of 2017 to 11.7 percent, up from 10.9 percent in the fourth quarter of 2016.

Proposing to take away insurance from millions of people has proven wildly unpopular. Actually doing so is likely to be even more unpopular. Yet “we are going to fulfill our promise to repeal and replace,” Sen. Lindsey Graham insisted after his bill was withdrawn. Graham and his colleagues have fallen into a trap of their own making. Failing to repeal the ACA leaves them vulnerable to a primary challenge from a true believer. Success may be worse, however. Taking health coverage away from millions of people may put the general election in play.

The moral for Democrats and liberals is don’t overpromise. And don’t make promises before thinking through how to fulfill them. Like the effort to repeal Obamacare, the current push by Sen. Bernie Sanders and some Democrats for single payer insurance is likely to include its own traps.

Sanders blames insurance companies for the lack of progress towards single payer. Yet how strong are the insurers? Their inability to convince Trump and most Republican lawmakers not to destroy the individual health insurance market suggests there is a limit to their power. I would suggest two other factors may be a hindrance to Sanders’ plan.

One is the heavy taxes needed. These were sufficient to cause Vermont to back out of its plan to introduce single payer in response to the ACA. Although Sanders recently posted tax and fee increases aimed at paying the cost, these numbers have not yet been analyzed by a neutral party, such as the CBO or the Tax Policy Center.

Sanders’ calculations look wildly optimistic. Offering no source, Sanders asserts his “plan has been estimated to cost $1.38 trillion per year.” He proposes tax increases and fees that together add up to $1.38 trillion. The trouble is that current US healthcare spending exceeds $3 trillion, implying that a single payer system would get rid of well over half of US health care costs. This promise is likely to come back to bite Sanders and those who believe his promises.

A second issue is employer health insurance, which the Sanders plan does away with. Almost 60 percent of working age Americans get their health insurance through their employer (in Wisconsin, it is almost 70 percent). How willing will this group be to make the switch?

Rather than looking towards single payer as the panacea for American insurance gaps, liberals might be better off working the bugs out of Obamacare. Among other advanced nations, Switzerland is often identified as having the most similar health system to Obamacare. Swiss citizens are universally required to buy health insurance from private insurance companies, which in turn are required to accept every applicant. Low income Swiss are subsidized to buy insurance. However, Swiss employers have little role.

According to the OECD 100 percent of Swiss residents are covered. Patients have been reported as being highly satisfied. Switzerland reports the highest life expectancy in the world.

Republicans had eight years of the Obama administration to come up with a real alternative to Obamacare. They are paying the price for not doing so before launching their repeal and replace mantra. Democrats would be well-advised to consider their experience.