Another play by Brookfield-raised, Pulitzer-winning writer, another potent production. 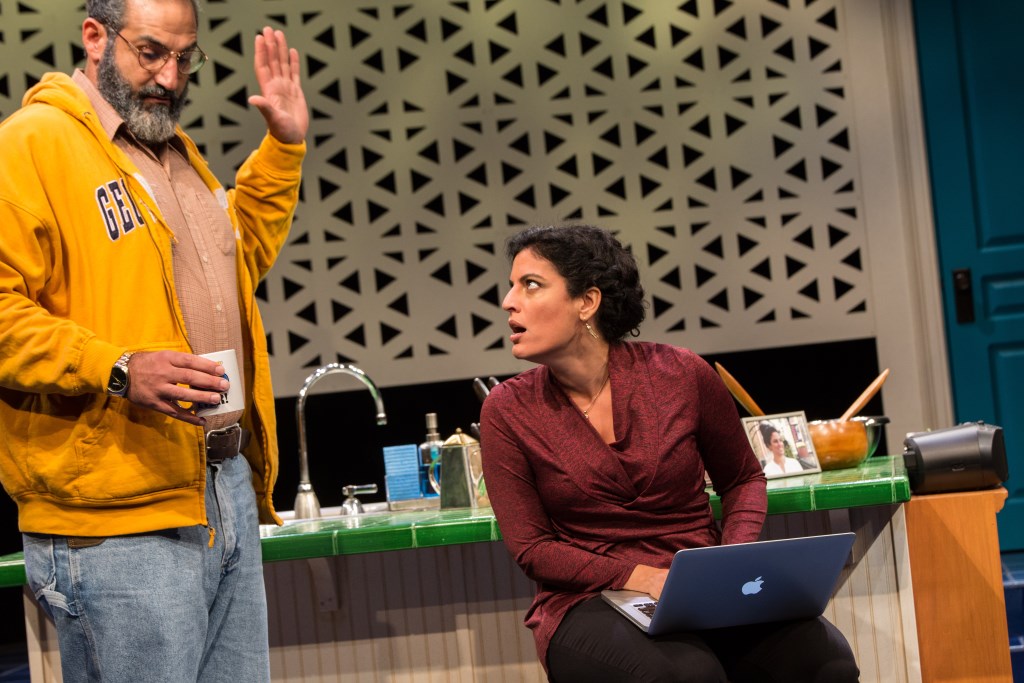 Milwaukee Repertory Theater presents The Who & The What in the Stiemke Studio from September 27 to November 5, 2017. Left to Right: Brian Abraham and Soraya Broukhim. Photo by Tony Duvall.

The Who & The What is a two-sided title for a two-sided play. It is both a comedy and a tragedy. A family sitcom and a family crucible.

It is one of the few times in any theater – in this case, the first-floor Stiemke Theater space of the Milwaukee Rep, through Nov. 5 —  that patrons will wish an hour-and-45-minute play actually lasted longer.

Much of the appeal – and the sense of compression, of characters we want to spend more time with — comes from the investigative ear and insights of Ayad Akhtar, the Brookfield-raised playwright who has entered a long-term relationship with the Rep and has already won a Pulitzer Prize for drama.

This play, briefly presented in New York in 2014, varies the themes seen last season in Disgraced, and yet will surprise audiences with the modernity of its humor and its insights into both the searching young and the traditionalists who chuckle at the impatience of youth for instant gratification. It is hardly a new theme for theater, but it offers fresh variations, including the power of religion.

It is centered on a Pakistani family — Americanized in some ways, close in traditional ways — with two daughters obedient to an autocratic father and yet rebellious and modernistic in their own private ways. The older is intellectually rebellious, the younger sexually. But father Azfal, while getting well-to-do in America, is his own defiant mix of Internet meddling and matrimonial rigidity.

Daughter Zarina is not just a Harvard intellect but a budding novelist, who mixes kitchen duty with bursts of insights that would put Freud to shame — and actually does. Secretly in her writing she has gone deep into the life of Muhammad the prophet in a manner that would shock her parents and most of Islam, yet is also liberating from the shackles of tribalism and the code of the hajib. Enter a white convert to Islam, Eli, who can keep up conversationally with Zarina, coddle her father and yet is troubled both by her daring and her decision to marry him.

Out of this we get the domestic jocularity we associate with “Modern Family,” the parental anguish we associate with Fiddler on the Roof and a deeper exploration of the motors of faith, thought, love and rebellion – almost two plays in one, a balance Akhtar maintains with the skill of his writing and the believability of interchange carried forward by director May Adrales and a strong cast. It is hard, sitting on the outside as patron, to know where Adrales fine-tuned and where she let the actors loose – and that is the ultimate in directorial compliments.

Strongest is Soraya Broukhim whose Zarina must move from playful older sister to exasperated daughter to a lover only slowly understanding her own anger through her writing. The actress catches the transitions with directness, a studied amusement and an intelligent, impressive continuity of person.

Forced to move even more powerfully among Archie Bunker-style intrusions, understanding father, and then furious religious traditionalist, Brian Abraham uses his talent as an actor – playing with his glasses, smoothing transitions with his hands, imposing silence with his physical gusto — to manage some mighty leaps of behavior. This gets him more laughs, sympathy and horror than a performer deserves in the time elapsed.

As Eli, Ben Kahre is warm throughout, amusingly wry in the first act and maturing in the second act when the character has been set up as a foil for manliness. Nikita Tewani as younger sister Mahwish has the difficult task of keeping the same personality as she travels from sitcom little sister to daughter caught between powerful forces. These last two characters face the hardest believability test in the dialogue.

The book Zarina is writing is called The Who and the What, referencing a philosophical conflict between loving the who (a family member) and the what (the person the family member has become).

Akhtar the writer throws out so much probing of the human character – and the American Pakistani characters — that the audience is engaged both intellectually and emotionally. The play’s quest to reveal humanity stirs the heart. But in a way there are two separate plays here, almost marrying but not quite. Despite the strength of the actors and director, despite the nature of drama to condense and distill, we are more observing than living with the deeper characters here.

Still, I wouldn’t miss this one for the world.

The Who & The What Gallery 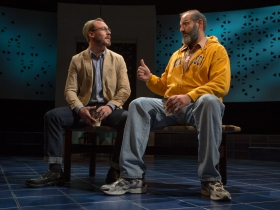 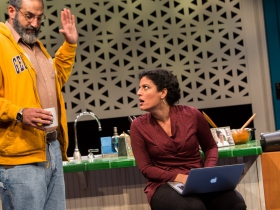 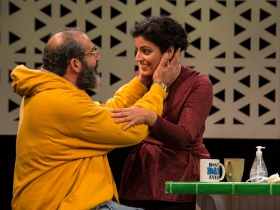 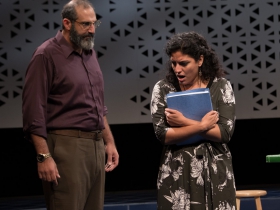 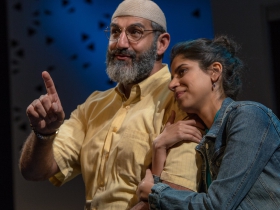 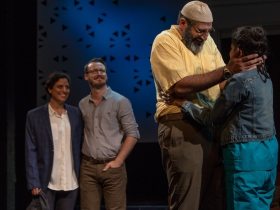