Sykes On ‘How The Right Lost Its Mind’

It has been nine months since Charlie Sykes’ voice went silent on the local airwaves.

But the veteran political commentator known for his conservative bent has not stopped speaking his mind and making headlines. In fact, one could argue he has made more headlines as he has expanded his sphere of influence on a national scale.

Sykes, who hosted his morning show on WTMJ-AM 620 for multiple decades, left the local radio scene with a splash. In his last year on the air, he routinely blasted then-candidate Donald Trump.

He also made waves when he joined the “Never Trump movement” even after the now-president was named the Republican Party’s nominee at last year’s convention. 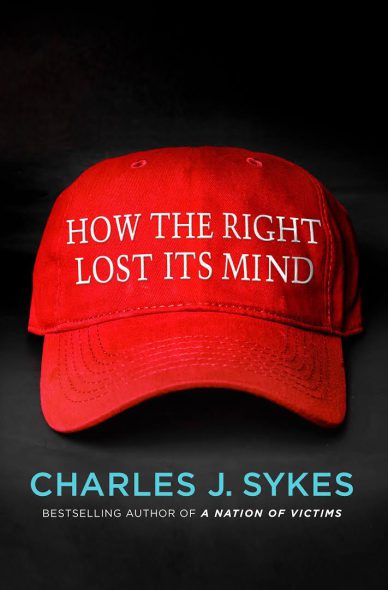 “How the Right Lost its Mind” by Charlie Sykes.

Since leaving WTMJ in December, Sykes has popped up in some prominent places — including MSNBC, the National Review, New York Times and Wall Street Journal. He also has authored a book, “How the Right Lost its Mind,” which is due out Oct. 3.

On Tuesday, Sykes chatted with another broadcast veteran, Mike Gousha, for the latter’s On the Issues series at Marquette University. The two Milwaukee media figures delved into a range of political issues and looked into the rearview mirror at last year’s unprecedented campaign season.

Sykes, who was raked over the coals by many of his longtime listeners for refusing to back Trump, said he did not regret taking such a stance. He also adamantly asserted he still considers himself a conservative.

“I am saying exactly the same thing now that I said two years ago (at WTMJ),” Sykes said. “I haven’t changed anything.”

Immediately after retiring from his daily radio gig, Sykes did raise eyebrows on both sides of the political isle when he announced he was serving as a political commentator on MSNBC, oftentimes viewed as the polar opposite of Fox News.

During the Q-and-A, Gousha jokingly asked, “Doesn’t it feel like you’re sleeping with the enemy?”

He might appear on left-leaning — or, at least left friendly — outlets, but Sykes said he openly and freely shares his conservative viewpoint on any number of issues.

“No one has ever asked me to say something I don’t believe,” Sykes said. “I feel very liberated not being part of the tribe.”

That liberation has resulted in more offers in surprising places. Gousha, for instance, pressed Sykes on actor and outspoken liberal Rob Reiner’s offer to have Sykes serve on a committee investigating possible Russian involvement in the election.

Sykes said he initially was hesitant to serve on the panel. Recounting his initial reaction to Reiner’s overture, Sykes said, “OK, this is weird. (Reiner and I) agree on probably nothing.”

At the end of the day, however, Sykes said he did agree to join. “This is not a left-wing issue. It’s something you ought to care about.”

Sykes, who once worked as a newspaper reporter at the Milwaukee Journal Sentinel, also shared his concerns with the state of journalism today in an era where the commander in chief routinely takes pot shots at media outlets.

“Something changed in 2016,” Sykes said of attempts to dispel untrue information. “It became harder and harder to push back. There are no more referees.”

When such venerable, well-resourced news institutions as the New York Times and Washington Post and routinely put through the ringer, Sykes said, “Clearly, something has shifted in American media culture.”

But Sykes said he does not lay all of the blame at the alt-right or alt-left movements. The established media institutions “need to ask some tough questions of themselves,” he said. “What have they done to squander their own credibility?”

The very basic core principles of democracy are at a turning point, Sykes said, which is a theme he weaves throughout his new book.

10 thoughts on “Sykes On ‘How The Right Lost Its Mind’”