“Guys and Dolls” Smacked Too Hard 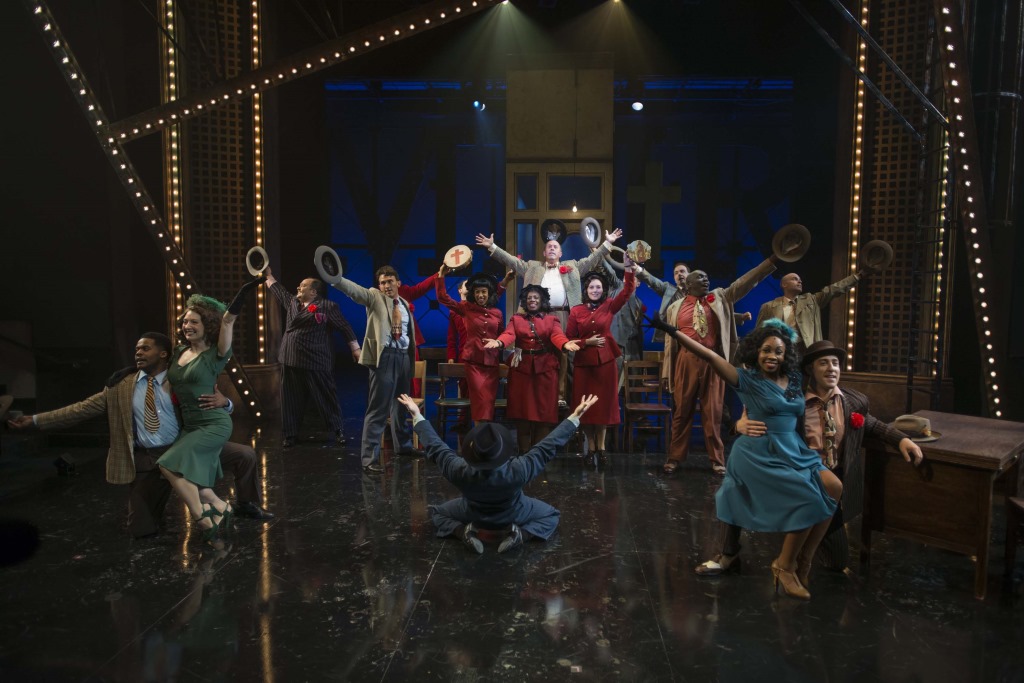 Milwaukee Repertory Theater presents Guys and Dolls in the Quadracci Powerhouse from September 19 to October 29, 2017. Photo by Michael Brosilow.

The promotional material for the Milwaukee Rep’s “Guys and Dolls” heavily emphasizes this accolade from Entertainment Weekly: “Broadway’s greatest musical.” After this production I would argue not quite.

It is a crowd pleaser front to back through October 29 at the Powerhouse stage, with nonstop motion to convey the colorful Damon Runyon underworld characters and superb words and music from Frank Loesser – plus an amusing book mainly from funnyman genius Abe Burrows. It’s both old-fashioned and enduring, open to touches of modern psychology as well as to traditional Broadway romance.

So I’m not pretending that the audience won’t fall over with frequent applause. The musical is packed with almost automatically wonderful turns. There is heightened stage energy moment upon moment, sight upon sound (great miking), crowd gimmick after gimmick. You feel like some first rate voices are anchoring a road show that could be presented anywhere.

Some characters are meant to be broadly drawn and sung, such as the dryly personable Michael J. Farina as Nicely-Nicely Johnson. He is part of two show-stoppers– the title song “Guys and Dolls” and “Sit Down You’re Rockin’ the Boat.” These are the times when expert song and dance can be loved for itself. But they are times that stand out in contrast here to the fake energy of other maneuvers. 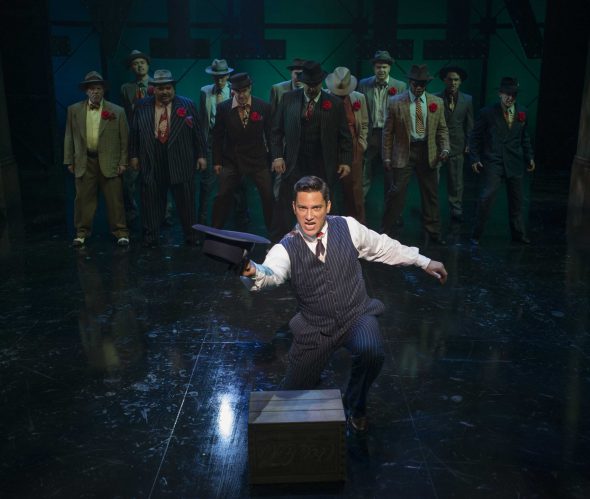 Milwaukee Repertory Theater presents Guys and Dolls in the Quadracci Powerhouse from September 19 to October 29, 2017. Nicholas Rodriguez and cast. Photo by Michael Brosilow.

It’s also worth the trip because of a Sky Masterson who would elevate any production – Nicholas Rodriguez. Charming and natural in manner, he tries to get inside the spoken and sung word even when directed to flourish his voice. And it’s a great voice. He attempts to put something more than cynicism behind the gambler’s attempt to court Sarah Brown, and even tries with thoughtful singing to motivate a change into a genuine lover, something this production speeds through more than the original does.

There may be some others in the company who might have come across as more truthful performers if they learned to tap the brakes. But director Mark Clements seemed compelled to floor-board everything. It makes a quieter moment of singing from David Hess in “More I Cannot Wish You” stand out in striking relief, almost extreme relief, which it shouldn’t be. A great Broadway musical contains clever stop and go. Clements seems enamored of the strong technical base being provided and then asks many in the cast to go harder on top of that.

He has modernistic set touches from Scott Davis, delicious period costumes from Alexander B. Tecoma and lighting by Jason Fassl that serves as visual percussion to the commands of conductor Dan Kazemi and a big 17-named orchestra (invisible to the audience except via a sole monitor we are not supposed to sneak a look at).

Except the orchestra is often abnormally loud, as if trying to swamp the energy and appeal the performers should have first responsibility for. This is an unusual overkill since the Rep generally has successfully balanced the functions of big production without letting one overwhelm the other.

Broadway and arabesque choreography explodes across the thrust stage from British import Stephen Mear, disguising how performer Brian Colliers is anchoring nearly every difficult moment when not also playing a gambler. (A near partner in dance versatility is Adrian Aguilar, who also is racing tout Benny keeping step with Nicely-Nicely – talk about doubly duty!)

But it’s that heavy use of the choreography that helps expose the problem. The excess pyrotechnics of the “Havana” number are mainly employed to give Emma Rose Brooks as Sarah Brown enough time to turn from stern Salvation Army sergeant into tipsy romantic, something we’d rather see the performer herself do.

It’s one of several times that Brooks is asked foremost to be a contestant on “The Voice” rather than wrap a great voice inside some great songs and dwell on inner conflicts. Perhaps she was subduing more genuine instincts because in “I’ve Never Been in Love Before” she seemed ready to match the focus on meaning that Rodriguez displays throughout. He tries to maintain credibility even in his robust “Luck Be a Lady Tonight.”

The appeal and the limits of mere vocal power were seen in the humorous courtship of Nathan Detroit and Adelaide. It is a relationship meant to make us wonder what a chorine beauty sees in a mouthy self-centered night crawler. But the point is she does see it – the unlikely ways of love are central to this musical comedy concept.

Except in this production, we flat don’t believe it. Richard B. Henry wants to routinely draw attention to every attitude Nathan has, so he masters the surface and the vocal gymnastics but not the heart. Kelly Faulkner shows a big voice and a constant determination to keep up with the nightclub routines Adelaide has been performing most of her life. But her preference is always to go for the laugh and not the potential character, so the realities that should draw us to Adelaide are absent. She pleases the crowd more by overpowering it than inviting us in.

A large ensemble of singing shady gamblers and street walkers also are making the case that energy and precision of motion are the most important elements of “Guys and Dolls,” or so it could be argued – but not by me.

For too much of the production, we are being pounded into submission by the sheer size of the effort, not to relish – except in Rodriguez — the natural motors of showmanship and our delight in the vagaries of human romance. If the Rep doesn’t care much about those emotional hooks, after awhile neither do we. 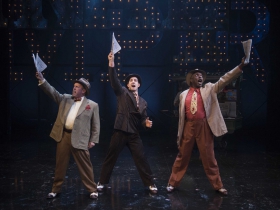 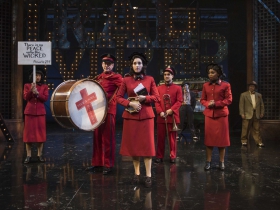 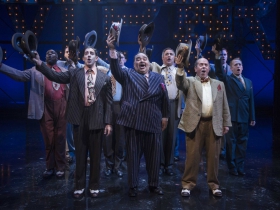 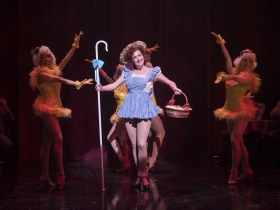 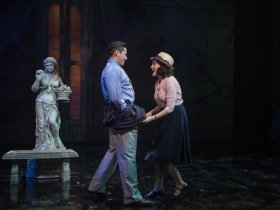 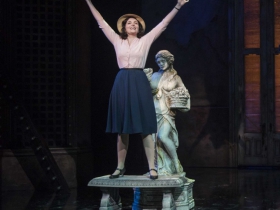