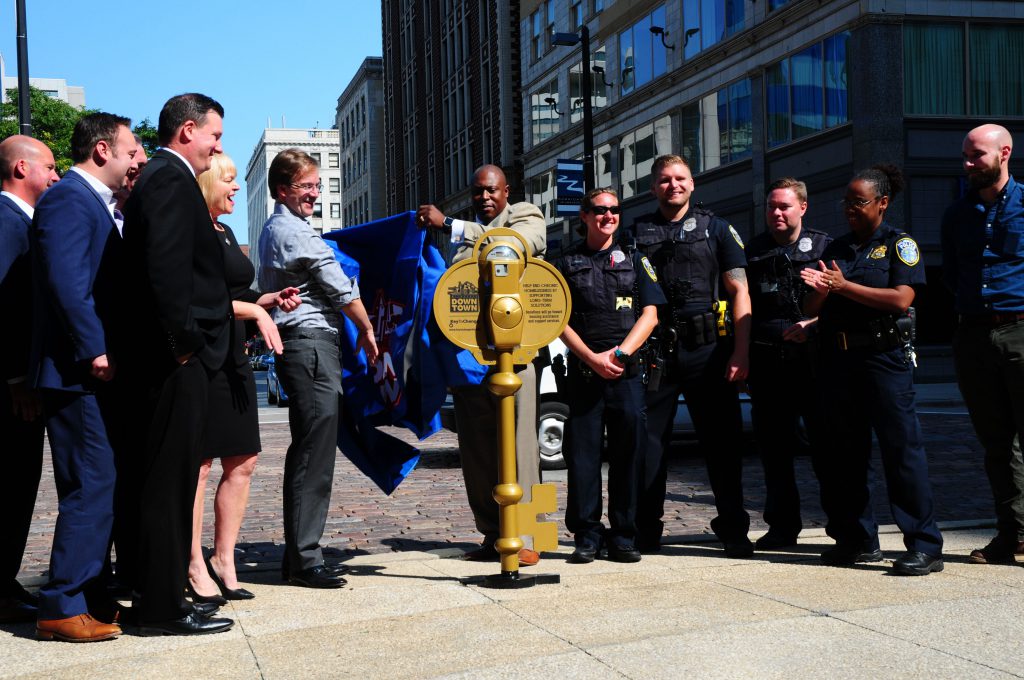 Your next trip up or down Wisconsin Avenue might look a little different. A recently unveiled program might seem small at first glance, but it is serving a big purpose.

Seven unorthodox parking meters have been installed in strategic areas of Downtown, all on Wisconsin Ave., in a new effort aimed at combating chronic homelessness. Milwaukee is one of five cities nationally adopting the program.

The parking meters are in the shape of keys, to symbolize the campaign, called Key to Change, which aims to bring meaningful, long-term solutions to members of the city’s most vulnerable population.

Besides the revamped look, the seven meters are being repurposed: instead of the money collected going into the city’s revenue stream, every coin plunked into the meters will be diverted to the Housing First Project, a two-year-old initiative with the overarching goal of trying to give the chronically homeless housing first and then taking on other issues they face.

A cross-section of governmental bodies and civic groups have rolled up their sleeves to make the meter effort possible.

Milwaukee County and the City of Milwaukee are part of the effort, as is the city’s Business Improvement District (BID) No. 21, which serves downtown Milwaukee.

Others buying into the latest overture include Interstate Parking Co.pany, which is a co-owner of the Shops of Grand Avenue redevelopment, and the Greater Milwaukee Foundation.

County Executive Chris Abele, who has made the fight against homelessness a key part of his administration, was on hand at Wednesday’s unveiling of the new meters.

These meters, Abele said, are the latest in a string of efforts to combat an issue that are starting to see tremendous success.

“Milwaukee is going to end chronic homelessness faster than any municipality of our size, or larger,” Abele said at a news conference inside the Shops of Grand Avenue mall. “That’s something to be proud of.”

While the city and county have offered hearty support for the new meters, the effort actually was spearheaded by BID No. 21.

Beth Weirick, CEO of the downtown BID, said Housing First fits hand-in-glove into the organization’s philosophy of ensuring all members of society have a place to call home.

Programs such as Housing First “give people a place to feel safe,” Weirick said, and allow the chronically homeless population “to feel like they have a place in this community.”

Milwaukee was not the only city hosting a ceremonial unveiling of key-shaped parking meters Wednesday. Leaders in other cities also held similar efforts to help combat homelessness. According to a news release, Denver, Detroit, Indianapolis and Washington, D.C. were among some of the other cities taking part in the effort.

The seven key-shaped meters in Milwaukee are at the following locations:

One thought on “New Parking Meters Will Help Homeless”