Paul Ryan criticizes such disincentives but his policies worsen the problem.

By Jon Peacock, Wisconsin Budget Project - Sep 1st, 2017 10:46 am
Get a daily rundown of the top stories on Urban Milwaukee

Paul Ryan. Photo from the Office of the Speaker of the House.

Several important public benefit programs provide strong incentives to work, but you wouldn’t know that when you listen to Wisconsin Congressman and Republican House Speaker Paul Ryan talk about those programs. He has been using half-truths to create a very distorted impression of public benefits, as he seeks to advance an agenda that would further shift federal tax and budget policy in favor of the very wealthy, at the expense of low-income households.

A recent example is a statement he made last week at his town hall meeting. Ryan asserted that the highest tax rate in Wisconsin falls on “the single mom getting 24 grand in benefits with two kids who will lose 80 cents on the dollar if she goes and takes a job.” There’s a little bit of truth in that statement, and a whole lot of distortion.

What Ryan was referring to is what is sometimes called the “effective marginal tax rate,” which is based not only on how much someone pays in taxes when they get an increase in income, but also the effect on public benefits they receive. Using that type of analysis, it’s true that low-income people who are eligible for public benefits sometimes pay a substantial effective tax rate for earning more income; however, Speaker Ryan’s description of the problem is exaggerated and very misleading.

Moreover, he has proposed eliminating or substantially weakening federal policies that significantly reduce the challenges faced by low-income people who boost their earnings. To help explain this, it helps to review the data in a Congressional Budget Office analysis of effective marginal tax rates, which shows the following:

In other words, the top rate is at a different point on the wage scale than Speaker Ryan claimed and it is typically far below the 80% rate that he suggested. The Center on Budget and Policy Priorities (CBPP) prepared a report last year critiquing the suggestion that low-income adults are better off not working.  The June 2016 CBPP report contains a bar graph that illustrates the findings of the CBO analysis. 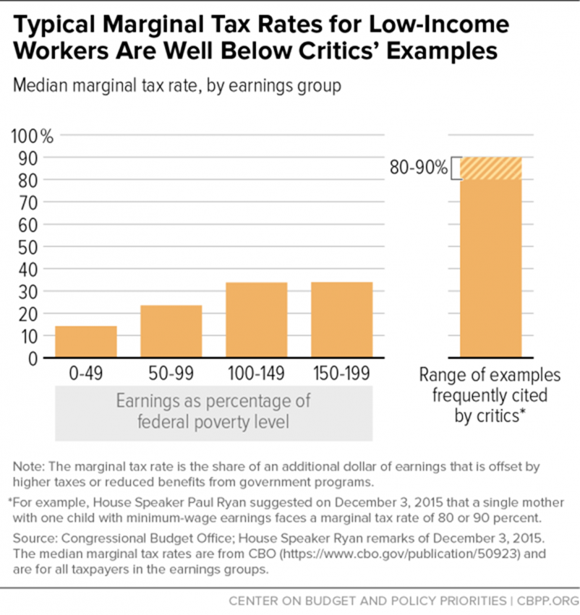 Several important benefit programs are only available for workers

Contrary to what one might infer from Ryan’s statement, some very important public benefits are only available for people who are working. That’s true for the federal Earned Income Tax Credit (EITC) and the state EITC, which are specifically designed to encourage work. It’s also true for the child tax credit and child care subsidies. Those aspects of the design of supports for low-wage workers help explain why the highest loss of benefits is not when someone enters the work force; according to the CBO report the highest effective tax rate is for parents in the very narrow income range of 115% to 126% of FPL.

Speaker Ryan’s statement incorrectly suggests that it’s common for a three-person, non-working family to be getting $24,000 in benefits.

Ryan’s claim seems to assume that an unemployed parent is receiving every benefit, and the high marginal tax rate that he asserted assumes that all of those benefits are phasing down in the same income range. The CBO report explains that those circumstances are very rare. Based on their analysis of data from 2010 to 2013 for several major public benefits (or “means tested transfers”), the CBO report states:

“An estimated 62 percent of lower-income families did not receive those means-tested transfers in 2013, either because they did not meet additional nonfinancial requirements or because they were eligible but did not apply for benefits. Of those who received transfers, most participated in only one program. (emphasis added)

The fact that most recipients of public benefit get only one type helps explain why the average effective tax rates the CBO calculated are far less than what Speaker Ryan claimed. 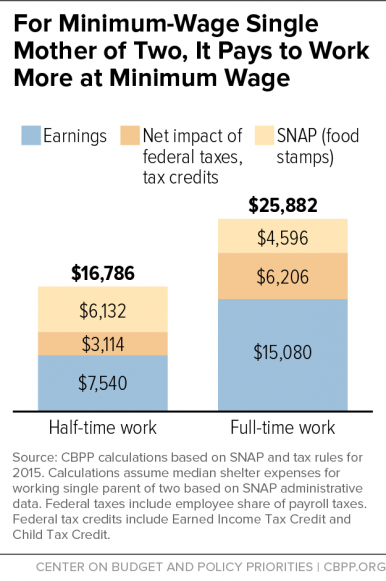 For Minimum-Wage single Mother of Two, It Pays to Work More at Minimum Wage

Contrary to what Ryan seems to be implying, working is almost always substantially better than not working for a low-income parent.

The CBPP report noted above shows that the current structure of safety net programs means that a single parent is almost always better off working than not working. The following graph from that report illustrates how the structure of public benefits incentivizes work for low-wage parents. Thanks to the design of the EITC and Child Tax Credit, an increase in wages of $7,500 results in a net increase in income and benefits of about $9,100.

Speaker Ryan is right that it’s important to try to hold down marginal tax rates for low-wage workers, but policies he has backed would exacerbate the problem.

Benefit cliffs or high marginal tax rates used to be larger problems than they are now. Several changes in benefit programs over the last decade have improved matters, including an increase in the federal EITC.  An even bigger improvement came with the implementation in 2014 of two key parts of the Affordable Care Act (ACA): federal subsidies for people buying insurance through the Marketplace, and expansion of Medicaid eligibility. Unfortunately, legislation that Speaker Ryan has promoted and other actions he has taken (such as litigation to block ACA insurance subsidies) would end or undermine those improvements.

The ACA provides insurance premium subsidies for people between 100% and 400% of the federal poverty level. Because those subsidies decline as income rises, this program plays an important role in reducing the benefit cliff that people used to face when an increase in income made them ineligible for Medicaid.

Despite Speaker Ryan’s professed concern about marginal tax rates, he has supported ACA repeal and replacement bills that would cause a huge increase in health insurance costs for low-income families who have wage increases that put them over the income limit for Medicaid. That would substantially worsen the problem he claims to be concerned about.