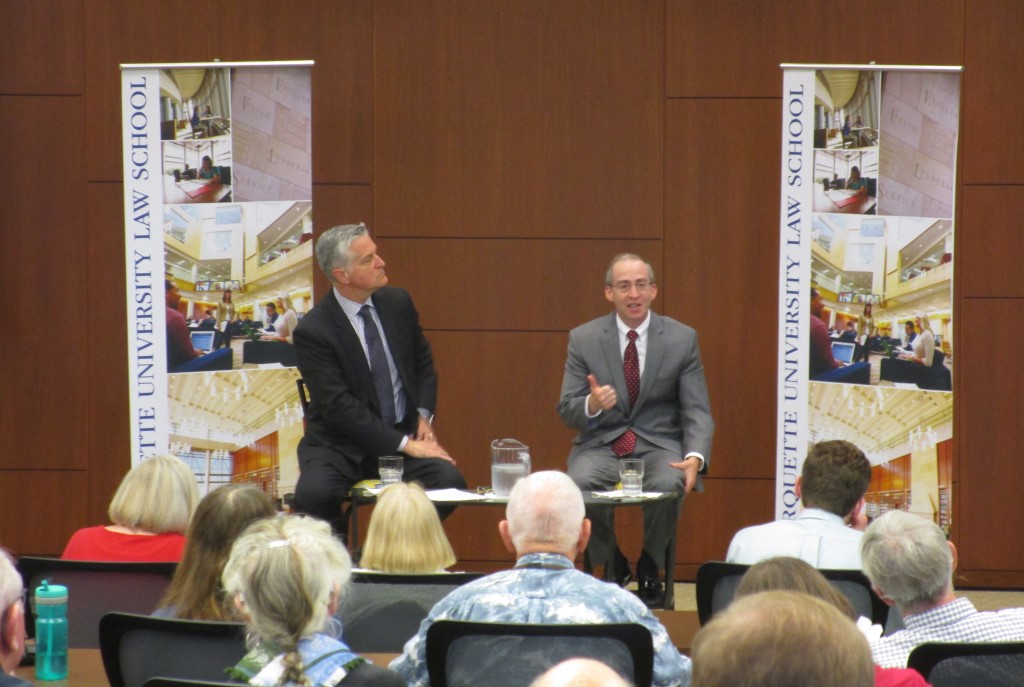 Milwaukee is at a crisis point, says Public Policy Forum leader Rob Henken. When it comes to balancing the services residents and businesses want with the funding needed to pay for this, the city is falling further and further behind, he notes, and something has to give.

Henken, who heads up the local nonprofit, nonpartisan Public Policy Forum (PPF), discussed his organization’s recent report on the city’s finances with interviewer Mike Gousha in his “On the Issues” series at the Marquette University Law School yesterday.

The 78-page report, which is encapsulated in this video, compares Milwaukee’s financial structure to 38 other peer cities and finds the city lacks options other cities has, which makes its financing unsustainable over the long run.

Although city officials passed this year’s operating plan last fall with relative ease, PPF in its analysis indicated greater challenges lie on the horizon. Some of those challenges are coming into play this budget season.

Throughout his hour-long discussion with Gousha, Henken on multiple occasions described Milwaukee’s current tax structure as “broken,” and said his research group is encouraging lawmakers on both sides of the political aisle to consider reforms for some of the state’s largest cities.

Henken’s appearance at On the Issues comes just weeks after Mayor Tom Barrett announced he was seeking authority to implement a half-cent local sales tax to shore up future municipal budgets given the huge, 20-year decline in state share revenue. The PPF study found this annual funding has declined in real dollars by $151 million — a huge hole for a city whose current budget for basic services is $834 million.

If Barrett’s sales tax plan does move forward, as proposed, Henken said it would infuse $40 million into the budget. But it would not completely solve the problem.

“A half-cent (sales tax) will go a long way,” Henken said. “But it certainly isn’t going to be the solution.”

State lawmakers only give municipalities a few levers to pull for revenue — primarily property taxes and state aid. The provisions hold true for a village with a few hundred people, just as they do for Milwaukee and its 600,000-plus resident population.

Factoring in the number of nonresident persons Milwaukee serves each day, Henken said this long-held uniformity is inequitable to Milwaukee and a number of other large cities in the state, including Green Bay, Kenosha, Madison and Racine.

PPF’s researchers have recommended other possibilities, including some form of a financial contribution toward city services from commuting workers and visiting tourists. Nearly ever other large city it studied is able to levy a city sales, income or other tax to gain revenue from these visitors, who use and benefit from city services.

“The thing is, ‘Why not have the ability to tax some of that consumption?’” Henken said.

During its deep dive into comparable data, Henken said PPF researchers looked at tax laws from one state to the next and how they apply to municipalities. Some states, Henken pointed out, were more restrictive than others.

“But across the board, they make exceptions for their bigger cities,” Henken said of mechanisms for levying taxes.

When he first took the wraps off his plan earlier this month, Barrett said his request of state lawmakers is to allow a city referendum in April, asking residents for approval to go with the half-cent sales tax.

Thus far, it remains uncertain how the state will field Barrett’s request.

The outside-the-box proposal, Henken said, has been a long time in the making, due in large part to a system he said is antiquated.

“Things stay the same,” Henken said of the culture in Madison, even as state aid to cities has plummeted. “It’s stayed the same as it was 20 years ago.”

In the same breath, Henken said he encourages Barrett and any other municipal leaders across the state to consider the full scope of such measures as added sales taxes.

“Very important questions would have to be asked,” Henken said. “What impact would this have on businesses (imposing the added sales tax)? You have to weigh all of these factors.”

When asked by Gousha when he thought he might see some movement in the tax reform discussion, Henken said it could take at least a few years.

But from his vantage point, Henken said he is hopeful PPF has at least moved the needle a bit in addressing what he described as a “festering” problem.

“We are not a lobbying organization. We are not an advocacy organization,” Henken said. “We are trying to start a citywide conversation. Can we elevate this issue to a point where we can do something about this?”