5 Ways to Improve the Riverwalk

Riverwalk should be a marquee attraction, but won't be without these fixes. 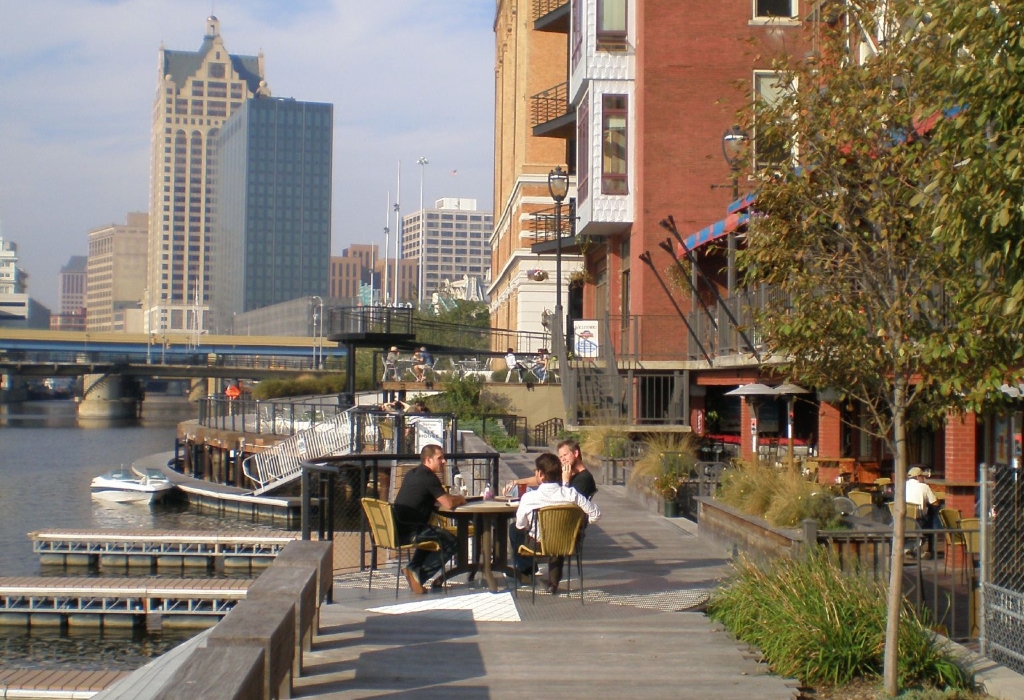 The Milwaukee RiverWalk is a success by any measure. It’s used in marketing materials for the city. It has re-knit the city’s connection with its namesake river. And last, but not least, the system has produced a billion dollars in increased property values for the $52 million invested in its creation. Impressive. But could it be better? 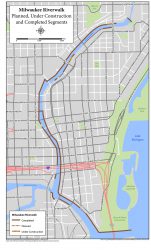 The system, which is built incrementally through a public-private partnership, is 83 percent complete according to a recent city report. It runs for approximately three miles from the southeast tip of the Historic Third Ward to the former North Avenue Dam on the Lower East Side, lining both sides of the river with fewer and fewer gaps in-between.

I took the opportunity to walk every inch of the system yesterday. Along the way I encountered 191 other pedestrians (yes, I counted) from all walks of life, showing the broad appeal of the system, even on a dreary day that included scattered rain.

The walk took hours, and parts were quite monotonous, but it gave me plenty of time to formulate ideas for how to improve things without breaking the bank. 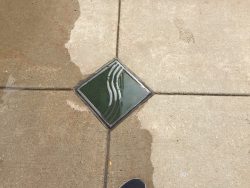 The oldest part of the system that runs through Downtown includes a wave symbol in the sidewalk that identifies it as part of the riverwalk system, but doesn’t include any text with the symbol to explain what it means. This is good enough for regulars, but useless to anyone encountering the system for the first time. Add some text to it, and install this everywhere so the Milwaukee RiverWalk has consistent branding throughout.

But any signage must also be maintained and updated. One good looking sign in a high traffic area of the Riverwalk lists a number of nearby restaurants, of which six of the eight have closed. That’s not only confusing, but embarrassing.

Expanding on that problem, wayfinding signage is available near Wisconsin Ave., but the further away you get the less likely you are to find a sign to guide you. The Third Ward and Lower East Side segments appear to be completely devoid of wayfinding signage. Which way to Lakefront Brewery? How far can I walk to the south? Where is the nearest bathroom?

The system, being that it’s built incrementally, certainly faces complications because it’s always slowly expanding and distances are therefore changing. But a simple branding and wayfinding scheme that can be easily updated would go a long way to improving the pedestrian experience. 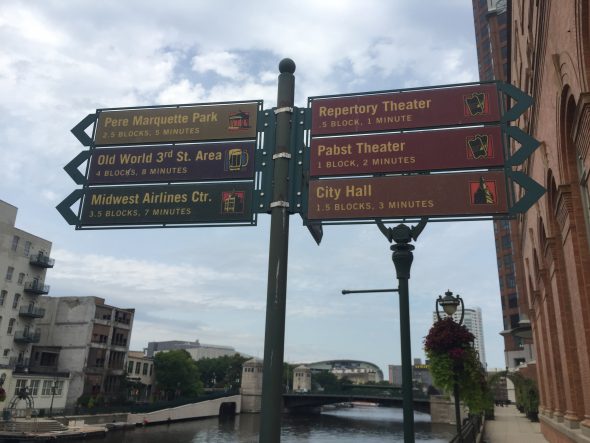 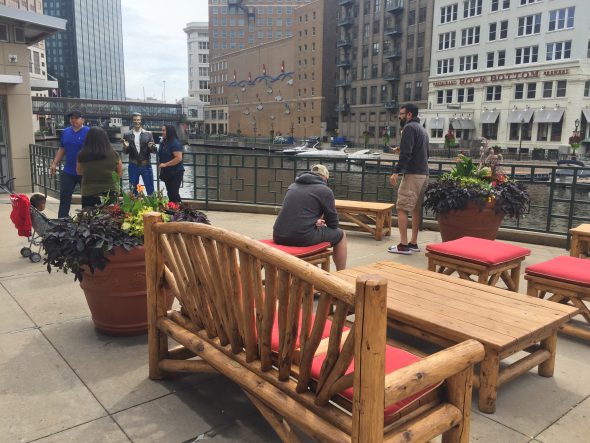 The Bronze Fonz always draws a crowd, especially now with this La Lune furniture nearby. Photo by Jeramey Jannene.

There are parts of the riverwalk that are very interesting places to hang out, but unfortunately you can count them on one hand (the Bronze Fonz, the area near the Milwaukee Ale House, the segment by Lakefront Brewery and the segment from E. Wisconsin Ave. to Rock Bottom Brewery). The recently unveiled Trestle Park will certainly add another must-see destination to the system, but sections of the riverwalk are devoid of anything engaging.

A laudable public art program adds some interest to the riverwalk, but the pieces don’t beg you stay around.

Love it or hate it, we live in an era of selfies. People want to snap a photo of themselves. This is why the Bronze Fonz succeeds. Build on that. Have VISIT Milwaukee install a picture frame that people can get their photo snapped in with the skyline framed behind them. Install a teeter totter in Schlitz Park along the massive surface parking lot. Have the Milwaukee Bucks build an interactive monument near the new arena. Build a water fountain with extensive lighting on the segment under Interstate 794. Those are just my ideas; others may have suggestions to further activate the Riverwalk.

3. How About Some Events?

There was a major riverwalk event, RiverSplash, except by the time it was shut down in 2008 it didn’t have much to do with the riverwalk. Today the only real programming along the river is the annual Milwaukee River Challenge which features rowing teams charging down a three-mile course. There is potential for so much more.

What would it take to get the NEWaukee Night Market to extend to the riverwalk? What about programming the riverwalk with musicians at various spots on summer weekends? What about a scavenger hunt for kids? The events needn’t be extravagant, but giving people a special reason to walk the riverwalk would help lay the groundwork for future improvements, and perhaps introduce many more people to this wonderful part of the city.

In the 12 years I’ve lived in Milwaukee there has been explosion of boating activity on the river. It’s time to bring that level of activity and excitement to the riverwalk.

4. Better Connect with the City 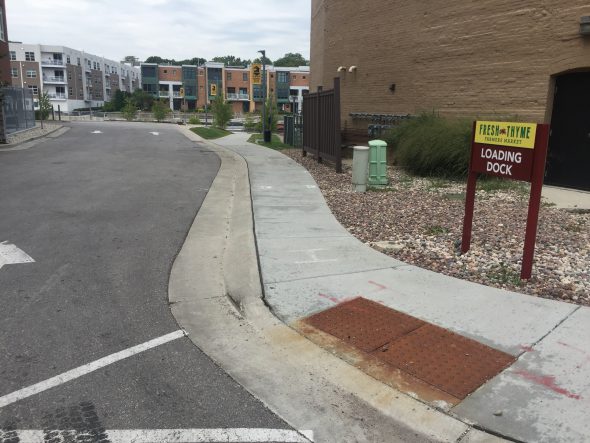 This is an access point to the Milwaukee RiverWalk. It could use a sign. Photo by Jeramey Jannene.

Not only does the Riverwalk need more signage, but numerous access points to it are completely unmarked. If you didn’t know where to look, you could easily miss them. And if you do find them, it’s unclear if it’s a public walkway or a private sidewalk leading to, say, a parking garage’s back door.

A number of access points are treated more like back hallways than front doors to a multi-million dollar, miles-long park. They’re unmarked small sidewalks or small ramps tucked between buildings.

If people are to use the riverwalk we need to lead them to the riverwalk. Future access points should be more like the west end of Buffalo St. where the street opens up to the river and includes a whimsical winding ramp to entice people to try the riverwalk. We need more such ways to draw people from the unmarked sidewalks that are tucked into many of the new buildings developed along the river. 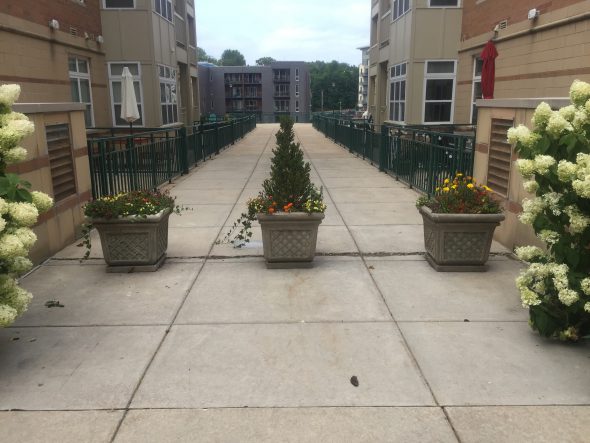 5. Plan for the Future

Given the complexities involved in building around bridges and dealing with a host of other difficulties, it’s amazing the riverwalk even exists in the first place. That said, it’s now such an established concept that any future development, public or private, needs to be well planned to facilitate future growth. Any bridges that are rebuilt should allow for the system to pass underneath or smoothly transition to street level; right now many of the switchback staircases and other accommodations to connect different elevations on the riverwalk are pretty clunky. Future development along the riverwalk should facilitate smooth transitions between segments.

The oldest segments near Wisconsin Ave today are the hardest to traverse because of the constantly changing elevations. I can’t imagine how uncomfortable they must be for those in wheelchairs. (I rode in one of the elevators the city had to build to settle a 2003 accessibility lawsuit. The nicest thing I can say is that I quickly forget it smelled like urine when I had to fight to get the door to close so the elevator would function.) Plans should be laid in place now to fix those elevation issues in the future, as segments will undoubtedly need to be rebuilt and properties will be redeveloped.

This will all be increasingly important as the city looks to build a second system along the Menomonee River. Plans for that new two-mile long system were unveiled earlier this year. The new segments will add value to the entire network, but only if they’re well connected.