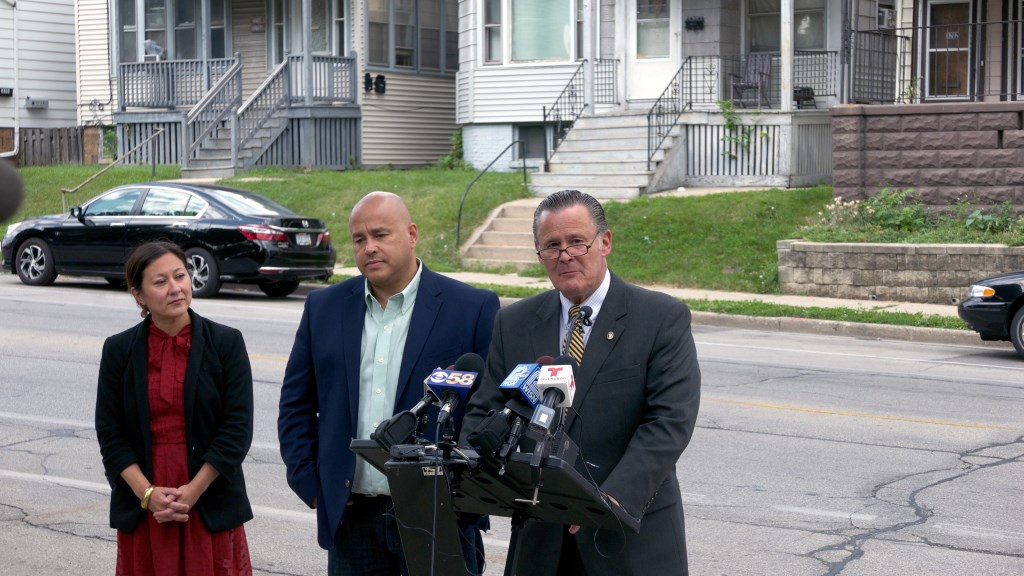 Two aldermen held a dramatic press conference Wednesday to broadcast a nuisance lawsuit the City of Milwaukee has filed in circuit court against a landlord in an attempt to break up alleged prostitution and drug dealing in their south-side neighborhoods.

Alds. Bob Donovan and Jose Perez boldly held the event right outside an alleged house of prostitution at 3200 W. Greenfield Ave., an otherwise innocuous brown-and-tan, two-story home. Their point was to demonstrate that the city is actively working to stamp out drug dealing and prostitution in the neighborhood with whatever means the city has at its disposal, while also sending a message to property owners and residents. 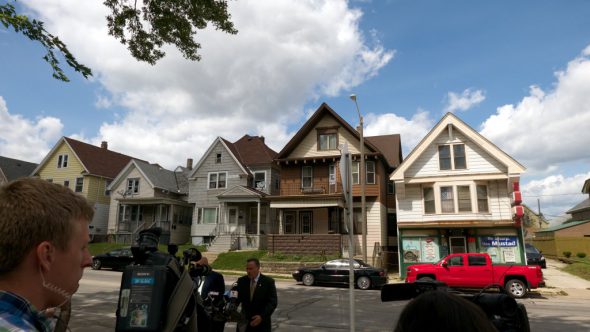 “The message we want to send is very simple,” Donovan said. “Landlords be aware of what’s going on at your property and don’t tolerate any illegal activity.”

As Donovan spoke to reporters his words boomed out over the neighborhood from a set of loudspeakers, delivering the message to residents and any landlords, should they be within hearing.

This particular case is being filed under a state statute called the “bawdy house” statute. “Bawdy” typically refers something that is comical and sexually indecent in nature. But there was nothing comic in the tone of the elected leaders.

The “Bawdy House” statute is a nuisance statute. The Language describes the specific nuisance as, “Lewdness, assignation or prostitution.” The city is using this law to go after the landlord with the hope he or she relinquishes the ownership. The ultimate goal would be for someone else to buy the property and make sure the home is no longer a place for “lewdness, assignation or prostitution.”

This is the second time in the last two months the city has pursued litigation against a nuisance house on W. Greenfield Avenue under the “Bawdy House” statute. The first one was further east, near 23rd St.

As for the house now targeted, immediately east of it, at 3144 W. Greenfield Ave., is Reinke Brothers fishing tackle shop. Bob Reinke’s family has operated the shop there since 1949. He first started noticing the odd activity at the house about a year ago, and he said it’s been blatantly obvious ever since.

“She’d come out of there half naked and dress herself on the front of the stoop,” he said.

Reinke said he only wishes he had security cameras at his business to catch everything over the past year. “It was horrible.”

Reinke’s store is a “destination store,” he said. His customers come from far and wide for his unique merchandise. And in the last year, a resident of the nuisance house would sometimes proposition his customers as they walked past.

Assistant City Attorney Heather Hough said that the actions taken against the owners of the houses on W. Greenfield Avenue are the direct result of resident complaints to the local alderman. Speaking to the press she urged residents to continue to complain and be vigilant, to “take ownership of their neighborhoods.”

Reinke said Donovan is, “My man,” adding, “If you got a problem and you go to Bob he addresses it.” He was clearly happy with the actions announced Wednesday and called the city’s action a “wonderful thing.”

With a number of resident complaints, and certainly those like Reinke who said they’ve witnessed blatant “prostitution and drug dealings,” Donovan said the idea to use this nuisance ordinance came out of meeting with a who’s-who of south-side leaders and city law enforcement representatives: “Myself, Ald. Perez, the Police Chief, the DA, the City Attorney, and the Captain from District Two.” He said it was Hough’s “outside the box thinking” that led them to the action they are now pursuing.

While some of the activities alleged to have taken place at the residence are crimes, Hough said criminal prosecution has a higher burden of proof. “We’re hopeful though, because we’ve gathered enough evidence where we’re pretty confident we will prevail in a circuit court action,” she said.

Moreover, the city has evidence that the landlord has personally participated in “prostitution activities,” she said.

Donovan and Perez both expressed commitment to further action on prostitution and drug dealing on the South Side. And Donovan said the press conference was held because use of the “bawdy house” statute is rare, and because he wanted his constituents to know the city was taking action.

Hough and Donovan both made the point that it takes time to address these problems and build a solid case. “We want to get the message out that in fact some things are in the works,” Donovan said.

Donovan said there has already signs of improvement following the actions taken over the past two months. But, like time, crime can slip away yet keep going forward.

“I am seeing less activity along that particular section of Greenfield over the last couple weeks,” Donovan mused. “However, it’s my understanding a lot of the activity has gone over to Orchard or National.”