Old South Side tavern since 1892, with countless owners, is suddenly chic. 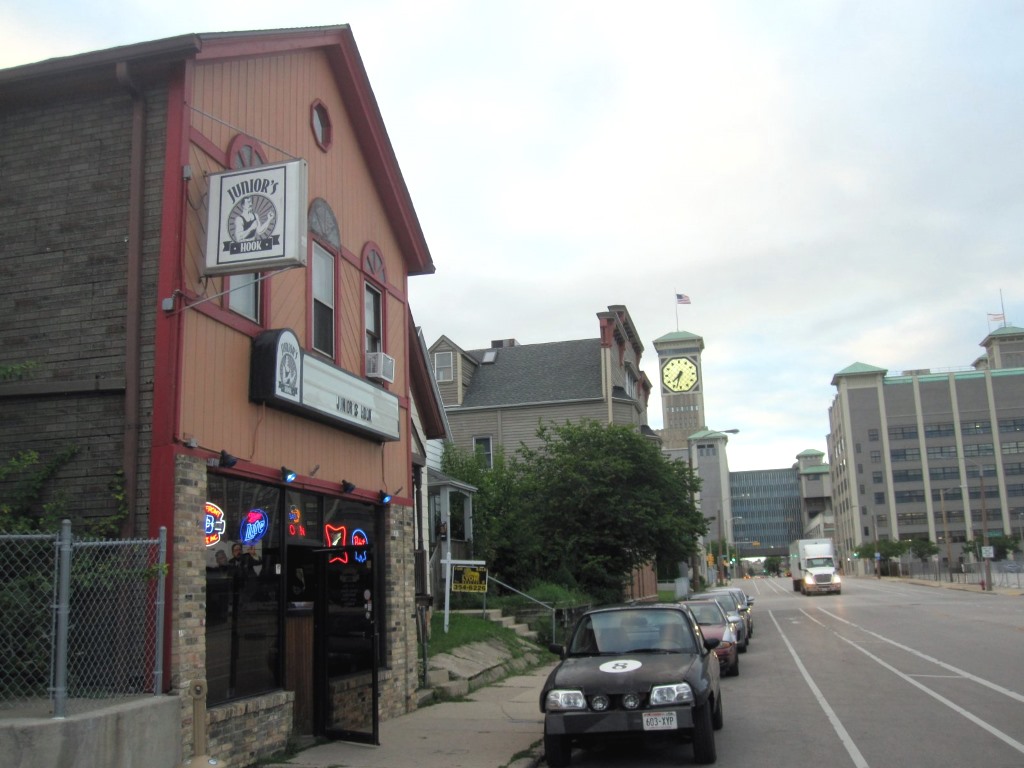 The structure that houses Junior’s Hook, at 1517 S. 2nd St., about a block south of Greenfield Ave., is yet another example of a Milwaukee building that has probably been standing since before the city enacted its first building permit regulations in the 1880s. Its actual date of construction is unknown, as no original building permit has been found.

What is today a middle-of-the-block saloon with a three-bedroom apartment above it was in 1892 a residence owned by Joseph Hoepfel, who went to City Hall that year to take out a permit for what at first glance appeared to be apparently overdue yet quite necessary alterations to the place, at what was then 551-Reed St.

“Add kitchen to present house,” wrote the permit inspector in his Spencerian script. It is unlikely that a home would have existed on the site for years without a kitchen, so it is reasonable to assume that a kitchen was added upstairs, the one below abandoned, and a bar installed in its place. A map of 1894 identifies the building as a saloon, so this place has been serving beer for a century and a quarter.

By 1919 it appears Joseph Liebl owned the building, leasing it to Charles Erzminik, who had been granted a license by the Common Council that year to vend “vinous, spiritous, malt, ardent or intoxicating liquor or drinks” from the premises. Erzminik’s saloon thus served as a liquor store as well as a tavern.

Next year, Prohibition ended that lark, and Erzminik’s place became a licensed “Soft Drink Parlor,” with permission to sell beer with as much as 0.05% alcohol. You’d have to drink a six-pack of that swill to get the equivalent alcoholic punch of a single can of Miller 64, and that’s not saying much. Erzminik and other soft drink vendors solved that problem by reserving the low proof stuff for the Feds, and serving illegal drinks to the customers.

With Prohibition ended, and women now accustomed to drinking in public, thanks to all the practice they got during the Noble Experiment, the owner added a women’s toilet room and applied for a tavern occupancy permit as did hundreds of his peers who abandoned the soft drink market en masse.

Charles Kargl, the owner of the building, took out the application to once again operate legally, identifying Martin Woloveski as the operator. The population of the neighborhood shifted from Northern European to Eastern European, and the watering holes adjusted accordingly.

On Nov 12, 1940, Mary Vogel, the owner, got a permit to “alter front of present tavern. $350. Frame new front, apply siding to front.” Additionally, the old stoop that intruded into the public way was removed, and the new street-level entrance was installed, with the stoop now on the inside. The transformation from residential to commercial building was complete, nearly a half-century after it was initiated by Hoepfel and his kitchen relocation.

By the end of the decade, the building was owned and operated by John Spek, Jr. He spent $1,900 to put two 24-inch- square windows on the front and to clad the building with buff-colored “Insul-Brick” siding, a popular and, regrettably, enduring material. Many buildings in the neighborhood were similarly treated, especially on the facades, since many are so closely spaced that you can’t get a paintbrush between them, much less sheets of fiberboard impregnated with tar and a granular substance embossed with a brick pattern.

With the exterior work done, Spek turned his attention inward, and on November 11th, 1951, as winter closed in, he took out a permit to “Remodel interior of tavern. To lower ceiling 4 inches.” Additionally, the $400 project called for the contractor to “Remove discontinued chimney in center of tavern area.” How long it had been out of service is unknown, but it could have been ever since Hoepfel moved the kitchen upstairs.

Illuminated by neon Pabst and Blatz signs, “Specky’s Bar” remained in business until 1973. The assessor took a look around that year and was not impressed.

“Specky’s Bar. Owner operated. No modernization or changes. Owner occupies entire building. Exterior is old. Min. of maintenance inside and out.”

A Revolving Door of Operators

In 1974, the building was owned by D. Repensek, who bought it from Spek for $17,000. Repensek contracted with William Fredericks to operate the place. They made a change to the interior that remains to this day, when they removed a “non-bearing frame partition to provide space for pool tables in rear of existing tavern.” That area, a few steps up from the front taproom, is a reminder that the deep lots here on the west side of S. 2nd St. have a considerable upward slope toward the rear that is not apparent from the street. Instead of full excavations, additions were often built to grade, no matter what it was, with much floor space being occupied by steps to connect the various levels.

In 1977 Robert W. Stuart operated the joint as Stuart’s Lounge. The inspector came by during business hours to talk to him, and was told that “Mr. Robert W. Stuart is not in till after 7 p.m.” Since the inspector probably was in bed by then, it is uncertain how this conundrum was resolved, or if the two ever met.

Anyway, Stuart didn’t last, and the next operator was James Carl Miller, who was given a “verbal order to re-open toilet window to provide vent,” as the inspector wrote on July 2nd, 1979 after a memorable encounter with the building’s plumbing, which was notorious within his professional circle.

It’s remarkable that changes to the building did not include a revolving door.

In 1981 Karla M. Farr, and, later, William Nylund cancelled their applications to run the place. Finally, after a period of vacancy, the building was operated by Howard W. Snead, who was granted a capacity of 30 for the old saloon in October, 1982.

If the plumbing was oft-cited for violations here, so was the electrical system. On June 15th, 1983, a fire caused $3,900 damage to the apartment above, requiring the replacement of “30 2×6 rafters 14 2×6 ceiling joists, wallstuds, ceiling, rof boards, siding, and interior finish and trim.”

The building and the business were bought by Nancy and Don Perleberg for $41,900 in 1984, apparently with Mrs. Perleberg in charge, since the place was named “Nancy’s Pub.”

Then, in 1988, a concept change, when Cynthia Duwe bought the building for $20,000 and opened the Center Court Sports Bar with a capacity of 25. In 1992, Todd B. Evenson did business here as “Stillwaters.”

By then the building was owned by John Lemley, who held it until his death in December 2016, with a revolving cast of operators.

Rebecca Wilson wanted to open a place called Port of Europe, Inc., but her application was cancelled in 1995. That year the toilet rooms were “newly remodeled” according to the owner’s usual practices. The city made an investigation and sent Lemley a “request for a quad fee for work done without permit.”

The building remained empty, as applicants’ licenses were cancelled, including that of Luis Silva, who hoped to open “Club Los 3 Portrillos” there.

Finally, in October, 1995, the building was occupied by Beatrice S. Gonzalez who operated Huarachin y Huarachon with a capacity of 80. That lasted a little over a year until April, 1997, when Daniel Brandt operated Nickname’s Sports Pub.

In December, 2000, after being vacant for eight months, the Half Time Executive Sports Bar was opened at the location by Julio Rodriguez. That was a short-lived enterprise as well.

Things did better from 2001-2008 when Diane Dowland settled in for a run as the Monkey Bar. In 2008 the building saw its greatest change yet when Greg Landig opened the Bomb Shelter here, housing his incomparable collection of beer memorabilia, and hundreds of exotic and rare brews. This once-hidden spot became a destination.

Landig died of a heart attack at the bar in March, 2012, and in July of that year, Lenny Jenkins opened The Parlor Bar, which also had a short run. Finally, in March 2015, Matthew “Sherm” Sherman, a longtime bartender at Champion’s Pub, opened the tavern as Junior’s Hook, naming it as a tribute to his father as it remains to this day.

Today the tavern sits quietly on its lot on a long block jam packed with similar modest structures. The saloon has a wall of windows fronting busy S. 2nd St. and offering a view of the modest buildings in the area, along with some remnant industrial activities, such as that at Engel Tool & Forge across the street, where workers toil with red hot ingots of steel that they pound into components for who-knows-what. 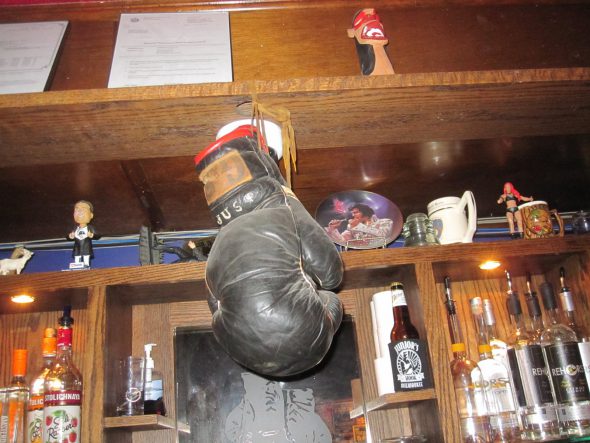 The boxing gloves of Sherm’s father, “Junior,” which once cushioned the jaws of opponents from the impact of Junior’s hook, hang above the bar in a place of honor.

The front windows are illuminated with beer signs, with Lakefront Brewery prominent among them. The bar cooler’s doors are plastered with stickers, immediately connoting hipster cred to the cognoscenti. You see this a lot in this neighborhood. Good City Brewing, Great Lakes Distillery and Real Chili are among the local products featured on the stickers and decals. Posters for bands like Social Distortion line the walls, along with bits and pieces of boxing ephemera. Wire-encased light fixtures look as if they could withstand Junior’s hook, and illuminate chalkboards advertising the many beers and special drinks offered for sale.

The walls are painted blue over a wainscot of brick. The pool tables are gone, replaced with a shuffleboard beneath a Bulleit Bourbon sign. There are also amusement devices (for entertainment only), including one that sells pull tabs. You can play bar dice.

The bar faces the blank north wall of the room, and is decorated with many bottles of spirits and a small collection of bobbleheads and other novelties. A number of television sets keep the patrons up to date with the latest sports activities, and a battery of taps stand ready to dispense the revolving selection of beers.

The neighborhood has undergone many changes over the years, as can be seen by the tavern’s many iterations. Just this June a Cermak’s Fresh Market opened blocks away at 1236 S. Barclay St., on land reclaimed from a former foundry. The UWM School of Freshwater Sciences is also close, as is the huge Rockwell International plant, with its giant Allen-Bradley Clock Tower just up the street to the north. The Rockwell workers have brought business to the bar, as have the neighbors, many of whom reside in the new apartments rising nearby. However, due to the current operator’s long time connection with the East Side crowd at Champion’s, it is also a draw for those who like to “make the circuit,” which in this case would probably include a run to O’Lydia’s and the Swingin’ Door Exchange later, just for good measure. Junior’s Hook packs a punch. 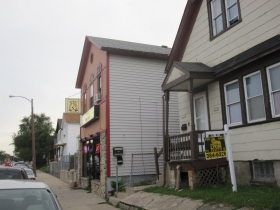 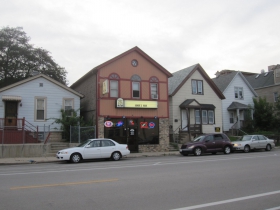 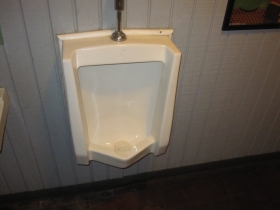 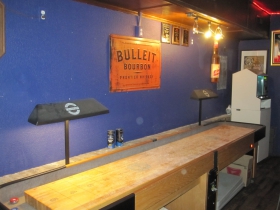 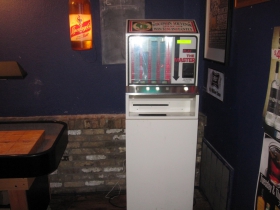 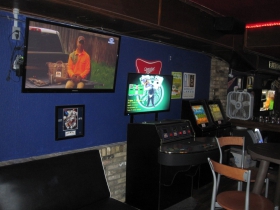 One thought on “Bar Exam: Junior’s Hook Has 125-Year Heritage”