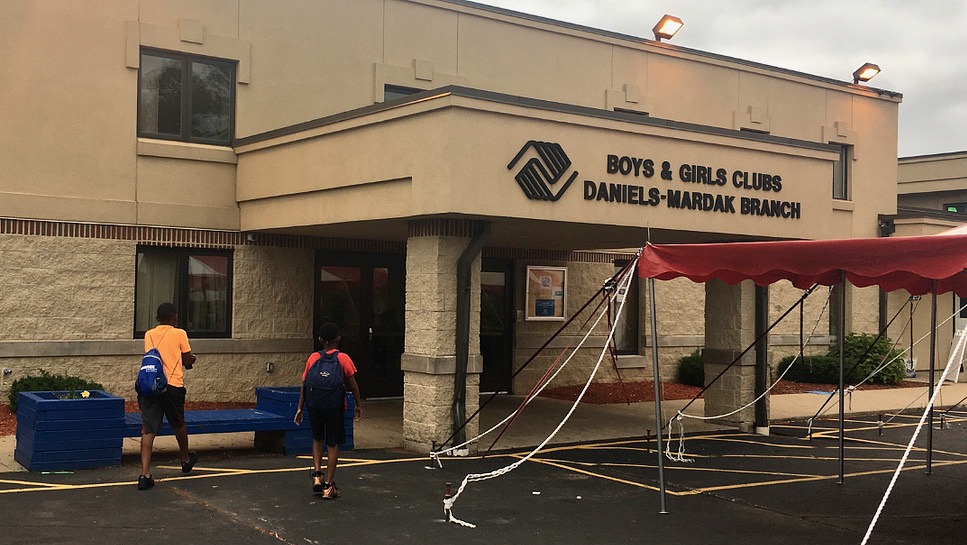 Two students enter the Daniels-Mardak Boys & Girls Club on Friday. The club will permanently close its doors after Aug. 25. Photo by Elliot Hughes.

Parents of children who attend the Daniels-Mardak Boys & Girls Club were dismayed to learn this week that the location will permanently close at the end of August — however club officials maintain it will not result in a reduction of services for children.

The Boys & Girls Clubs of Greater Milwaukee circulated a letter to parents earlier this week informing them of the Aug. 25 closure of the Daniels-Mardak club, located at 4834 N. 35th St., before going public with the announcement Thursday. 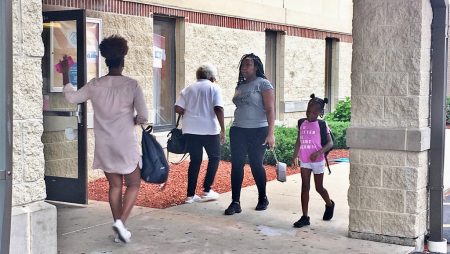 Ciara Shanks, 24, drops off her daughter, Jordan Davis, 8, Friday at the Daniels-Mardak Boys & Girls Club, which will permanently close its doors Aug. 25. Photo by Elliot Hughes.

Vincent Lyles, the president and CEO of the organization, said Thursday the closure resulted from a disagreement with the property owner, the Holy Redeemer Institutional Church of God in Christ.

“We’d been talking for a while,” Lyles said. “In any situation where there’s a landlord and a tenant, in those discussions at some point in time you’re going to agree and you’re going to disagree.”

Holy Redeemer did not immediately return a request for comment.

A rumor that the LaVarnway club, 2739 N. 15th St., is also going to close made its rounds on social media in the last several days. But Lyles said that club is not going to close.

According to Lyles, 250 to 300 children on average attend Daniels-Mardak daily over the summer, with 180 in attendance each day during the school year. But Lyles noted that the organization is opening six new locations — bringing the citywide total to 47 — in time for the school year.

Two of those will be within two miles of Daniels-Mardak, at Barack Obama School of Career and Technical Education and at the Marvin E. Pratt Elementary School. Those two can handle a combined 225 students daily.

“I don’t think it’s going to be as hard as people (think),” Lyles said, referring to parents finding a new club for their children. “I just know we’re going to provide concierge-type service to them if they call or stop by.”

Still, several parents who dropped off their kids at Daniels-Mardak on Thursday sighed and shook their heads when asked about the closure.

Anitra Bivins, 27, lives in the Sherman Park neighborhood, where the Mary Ryan Boys & Girls Club was recently renovated. But Bivins has taken her two kids to Daniels-Mardak — about a 10-minute drive from her home — for two years because the area feels safer and she trusts the staff.

Unless most of that staff can be found at a new location, she does not think she’ll take her kids to a new club in the fall.

“They’ll be at home. I’m not comfortable sending them anywhere else,” Bivins said. “I think this Boys & Girls Club was safer than any other club I’ve run across.”

Tiffanny McMurray, 38, and Mercedes Stevenson, 26, also were dismayed at the news. They plan to find a new club for their children, but do not think the transition will be simple.

“You have to find people you trust,” McMurray said. “It’s sad. I’m hoping it won’t be hard.”

The Daniels-Mardak staff is holding office hours for parents to receive help finding a new club, on Tuesdays, Wednesdays and Fridays from 8 to 9 a.m. and from 3 to 5 p.m. during the weeks of Aug. 14 and Aug. 21.