By Jabril Faraj, Milwaukee Neighborhood News Service - Aug 14th, 2017 09:56 am
Get a daily rundown of the top stories on Urban Milwaukee 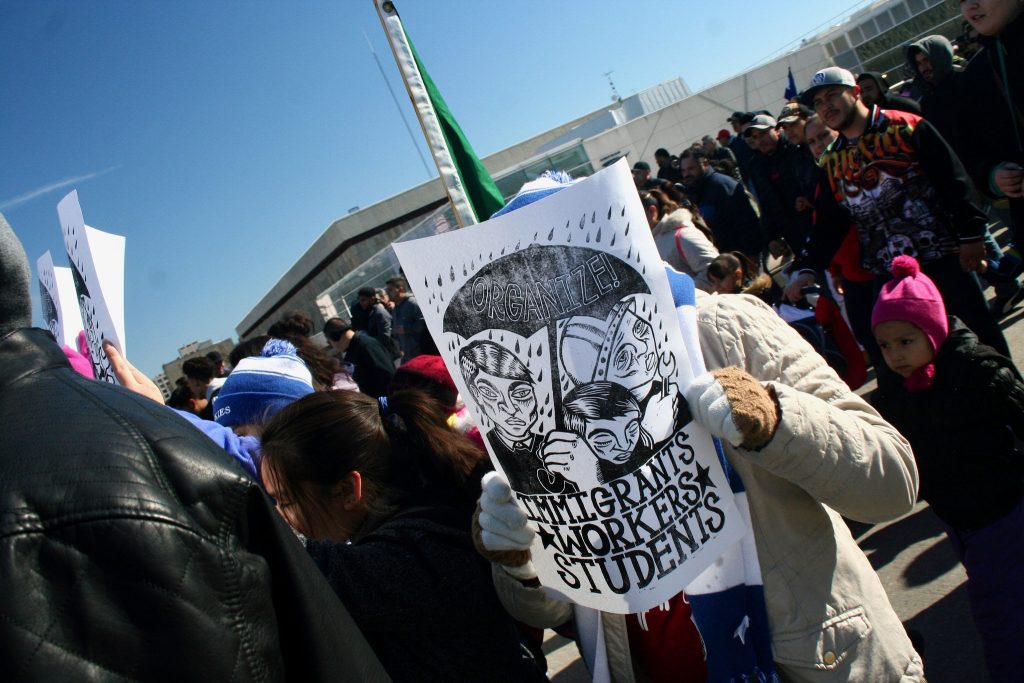 One of the tens of thousands who marched through Milwaukee on a Day without Latinos, Immigrants and Refugees in February. Photo courtesy of milwaukeestories.org.

Leaders of a new community coalition are taking aim at Sheriff David Clarke.

Formed earlier this year, the Coalition for a People’s Sheriff was inspired by “incompetent,” “unethical” and “inhumane” actions of Sheriff David Clarke, according to coalition leaders. The coalition initially sought to influence Gov. Scott Walker’s appointment to replace Clarke after he was offered a position as Assistant Secretary for Office of Partnership and Engagement at the Department of Homeland Security. But after allegations of plagiarism, final approval was delayed and fell through at the end of June. Now, the coalition is setting its sights on the 2018 election and beyond.

In a June letter, the coalition asked Walker to ensure an appointee would treat prisoners with dignity and respect, not enroll in the federal 287(g) program, protect the First Amendment rights of all people, work with diverse and marginalized populations and commit to ending privatization, “over-incarceration” and “state violence against Black communities.”

The letter was signed by State Rep. David Bowen and 14 organizations including UBLAC (Uplifting Black Liberation and Community), Ex-Prisoners Organizing (EXPO), ACLU of Wisconsin, the Wisconsin Federation of Nurses and Health Professionals, Wisconsin Transgender Health Coalition and Citizen Action of Wisconsin. Some of the organizations involved have called for Clarke’s removal.

“We want a sheriff that actually upholds the law and actually is for the people,” said Annia Leonard, a youth organizer and member of UBLAC. UBLAC is an advocacy organization led by black women, queer and trans individuals. “We don’t need any more manipulation and we definitely don’t need any more dehumanization.”

In an emailed statement, Clarke called coalition leaders “insensitive mush minds,” “misguided miscreants” and “rabble-rousers.” He said the platform is “nothing more than warmed-over liberal talking points,” while emphasizing the “right and need” for the United States to enforce its borders and the importance of separating “human predators” from the rest of society. 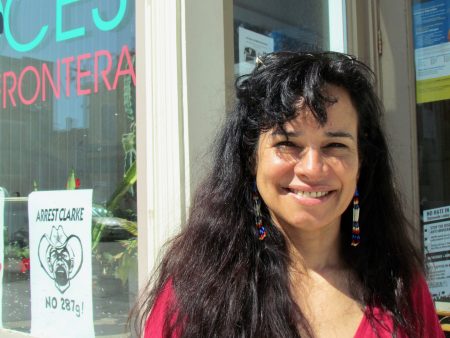 “I will not be bullied by this group of socialist misfits,” Clarke wrote.

“When we’re treated as less than human beings, that’s detrimental to everyone,” said Mark Rice, assistant state director of EXPO. He pointed out that some people who Clarke calls “human predators” are in prison for “crimeless revocations” — the process of re-incarcerating individuals on supervision for violating a rule. “This tears families apart and drains resources that could, instead, be used to build stronger communities.”

Voces de la Frontera Executive Director Christine Neumann-Ortiz said people are reacting to an “aggressive assault” on marginalized groups nationwide. Because of that assault, she added, “there is an opportunity to demand more and expect more.”

“I think the one silver lining in the moment that we’re in right now is that … we’re able to, now, really connect those struggles (of marginalized groups),” she said.

“We need champions — champions that have ties to an organized community — to really deliver on the kind of changes that we need,” added Neumann-Ortiz. “In these times, we know that the people must stand up for themselves or things will get very bad very quickly.”

Marina Dimitrijevic, state director of the Wisconsin Working Families Party, said the coalition isn’t at the point where it can run its own candidates yet.

Earnell Lucas, a 25-year officer with the Milwaukee Police Department, has stated that he will run for sheriff in 2018. He has contributed to Clarke’s campaigns, most recently in 2009. Lucas said he would not implement 287(g) — which grants local police the authority to enforce immigration laws — under any circumstances, adding that the backlash to the Black Lives Matter movement has been more disconcerting than the movement itself.

Ultimately, it will be up to voters to decide what kind of candidate they want, said Livia Rowell-Ortiz, a trans activist and board member of Genderqueer MKE, an education and advocacy group. Rowell-Ortiz is the daughter of Neumann-Ortiz.

Regardless of what happens in the 2018 election, the coalition will continue to move forward, according to those interviewed. Leonard said members are beginning to understand each other better and learn how they can best work together. According to Rice, it’s important to start organizing now to “lay the foundation for change later.”

“There’s a lot of power in bringing all of these diverse perspectives and individuals together,” Rice said. “When we’re building a movement like that, then it’s going to have more of an impact and it’s going to help to amplify our voices and realize that we’re all in this together.”

It’s essential that people are honest about inequalities, injustice and racism so they can be addressed, according to Dimitrijevic.

“It’s time to start having some real talk,” she said. “The next step … is action. And that’s what this group wants to do.”

The initial goal is to vote Clarke out, said Rowell-Ortiz, but added, “This isn’t just about Clarke,” noting there are other ways to achieve change.

“Our community, the City of Milwaukee, and others can definitely move towards that goal, regardless of who’s in power.”