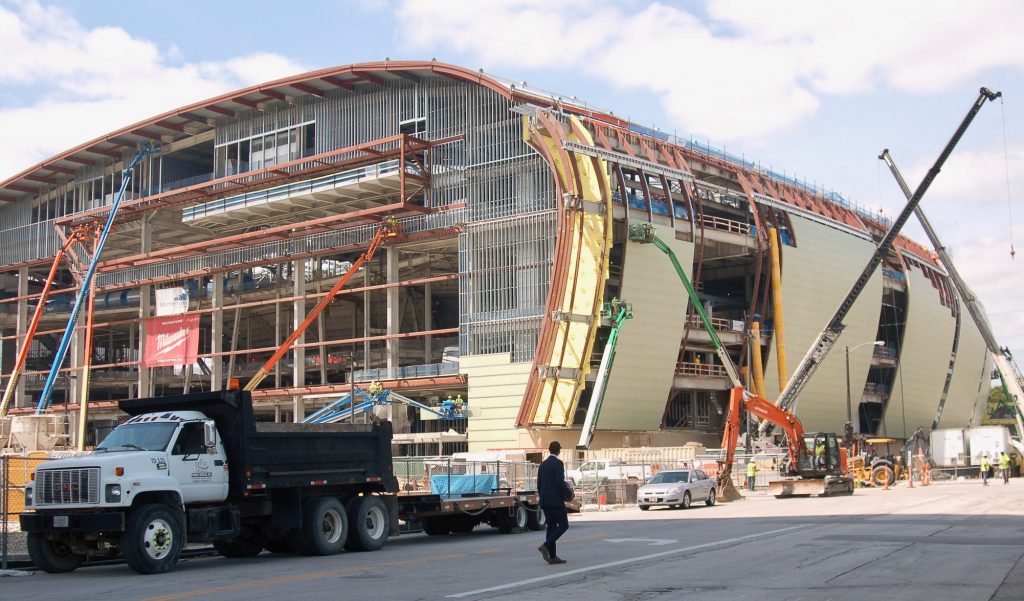 The new Milwaukee Bucks arena being constructed downtown is part of the city’s building boom. Photo by Edgar Mendez.

Milwaukee is in a position to create a “world-class downtown,” which could generate much-needed income to support public works, safety and health, and additional quality-of-life benefits to surrounding neighborhoods. However, for that to happen, city, state and county officials must work together to make long-needed improvements to their antiquated revenue-generating system, according to a new Public Policy Forum report.

“A key question is whether a structure that was imposed on Milwaukee by state government more than a century ago — and that makes no distinction for the city’s unique economic attributes — is adequately meeting the city’s financial needs and the expectations of its residents, businesses and visitors,” said Forum President Rob Henken.

The report, “On The Money?,” is a follow-up to an earlier PPF report that identified problems with the current revenue system. The new report, as Urban Milwaukee reported on Tuesday, looked at 38 peer cities and found Milwaukee is the only city that relies almost entirely on two revenue streams — state funding and property taxes. Other cities all levy other taxes and on average get 29 percent of their revenue from a local sales tax, which the City of Milwaukee lacks.

The problem for Milwaukee has gotten worse, the study found, because state aid has plummeted since the mid-1990s, with annual aid dropping by $151 million in real dollars since then. Yet Wisconsin tax laws prohibit municipalities from diversifying their revenue streams through the use of local taxes like a sales or income tax, which might help Milwaukee weather the drop in state aid. 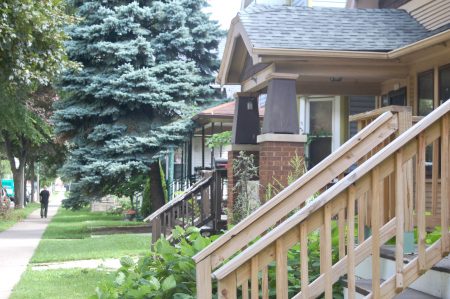 Unless additional revenue sources are found, local homeowners will likely see an increase in property taxes in the future, according to a recent Public Policy Forum report. Photo by Edgar Mendez.

With a substantial need for more police and other local services, as well as an increased number of retirees with city pensions, said Henken, Milwaukee residents are likely to see increases in property taxes unless other funding sources are found.

The city’s hands are tied on the issue of its revenue structure and will likely remain so, according to Alderman Bob Bauman, who represents Downtown on the Common Council.

“I don’t think the ball will even be put into play,” Bauman said. “Hell will freeze over before the state legislature will give us a general sales or dedicated tax.”

Among the possibilities for revenue growth identified in the report is the creation of a mechanism for nonresidents who are “engaged in business, employment, tourism, or entertainment,” in the city to pay taxes on the services they use while in the city.

“We need to figure out a way to tax people who come into the city and utilize the services but go home to spend their money and pay taxes there,” Crowley said.

Julia Taylor, president of the Greater Milwaukee Committee (GMC), said there needs to be a way for commuters to share the costs the city is bearing by providing services to them, so that local taxpayers aren’t overburdened.

“It’s worthwhile to look at usage fees to recapture the costs for other people that visit or work in Milwaukee,” Taylor said.

The GMC commissioned the report as part of its MKE United effort. The city’s revenue framework has limited its progress, said Taylor, especially for low-income communities that don’t draw enough investment to grow their property tax base.

“Areas that don’t have a lot of private sector investment can’t use tax incremental financing or other developmental landscape tools that help neighborhoods be successful,” Taylor said.

The state’s restrictions on municipal taxes have severely hindered Milwaukee’s ability to take advantage of its many assets, Crowley said. “There are legislators around the state who feel the need to try and stop dollars from going to the city of Milwaukee, even though it’s the economic engine for the state,” he added. The city of Milwaukee contributed more than $1.37 billion in state taxes with a return of only $227 million in shared revenue payments in 2015, said Mayor Tom Barrett during his “state of the city” address in March.

Crowley cautioned that any new taxes in Milwaukee should not be directed at nor disproportionately impact low-income residents. Still, if nothing is done, he said, property taxes will end up being raised, which means rent will go up and Milwaukee residents will suffer because of it.

The report outlined several scenarios in which the city could provide property tax relief as well as raise income for services. It could create new local taxes such as income taxes or specialized taxes on hotels, entertainment, downtown restaurants and alcohol. Though the report did not recommend which options would best suit Milwaukee, discussion between state and local leaders needs to occur now, warned Henken.

“We have had this very nonproductive argument for decades between city and state leaders about state aid. Therein lies the attractiveness of having some type of sales tax in the revenue mix of a major city like Milwaukee. Every other city of its size or larger makes use of some type of sales tax,” Henken said.

State Rep. Evan Goyke said the biggest challenge is convincing state legislators outside of the city that they too will benefit from taxes created in Milwaukee.

“It’s a local solution that solves a statewide problem. The more empowered Milwaukee is to generate and spend revenue and solve local issues, the less the state has to pay in a number of local areas,” Goyke said.

The downtown building boom provides an ideal moment in time to capture and take advantage of the city’s growth, he added. The problem with coming to a consensus, he acknowledged, is the city’s image problem across the state, and the fact that many smaller cities are struggling as well. Goyke said the solution is to build a coalition of rural and urban communities to change Milwaukee’s economic structure.

“We need to free up Milwaukee so that Eau Claire, La Crosse and Green Bay could see a benefit as well,” Goyke said.

The report should be the beginning of a long discussion, said Taylor, who agreed that any solution would need to work for the entire state and local counties. Still, she said, “facts are facts.”

“The system is breaking down and we need to create a more balanced approach to local taxation. It’s time to sit down and have that discussion.”