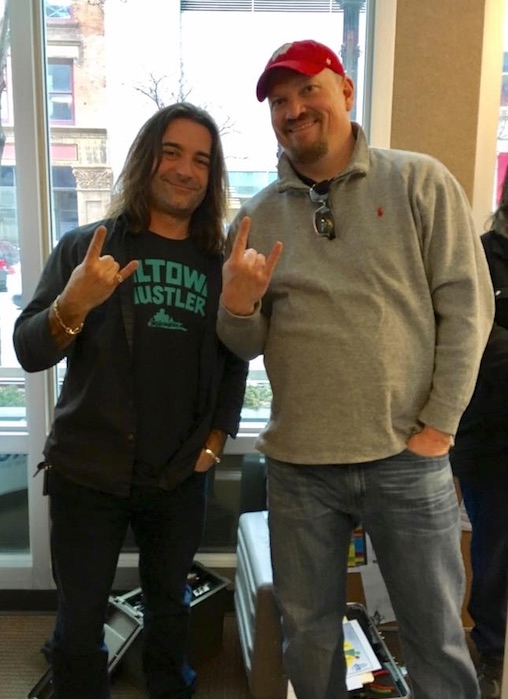 It was back in January that entrepreneur Mike Crute shook up the local radio market by starting, of all things, a liberal talk radio station. Crute, who had co-hosted the liberal “Devil’s Advocate” show in Madison, purchased 1510 AM, a longtime Milwaukee radio station and rebranded it as WRRD-AM, “Resistance Radio.”

The station has done pretty well, and the afternoon drive-time show, which retains the “Devil’s Advocate” title, is still co-hosted by Crute and his libertarian colleague, Dominic Salvia, and is a lot of fun. (I’ve been an occasional guest.) “The Devil’s Advocates” program, in fact, is nationally syndicated by WYD Media Management and distributed by Westwood One.

But the station’s license is limited to daylight hours only — literally sunup to sundown — which is fine for long summer days, but in mid-winter means Resistance Radio must turn off its liberal beacon at 4:30 p.m., in the middle of afternoon drive time, and start its morning drive-time show later as well. Hardly an ideal arrangement.

But Crute had made contact with Frank McCoy, a Chicago-based businessman who has been involved with various broadcast and media companies since at least the mid-1990s. McCoy owned an FM translator, as it’s called, at 103.3 FM, and used it to broadcast a show in Waukegan, Illinois. Legally, it could also be used in Milwaukee to extend the hours of an AM station like WRRD. So Crute offered to pay McCoy to lease the FM translator and the two men jointly filed a construction permit with the FCC to construct an antennae in Milwaukee to facilitate a broadcast using the 103.3 signal.

But somehow, WTMJ radio has intervened and made a deal with McCoy to grab the FM translator. “McCoy says he was approached by people and got a big bag of money from WTMJ,” Crute says. Of course, it’s also possible it was McCoy who approached TMJ, offering a deal that would hamstring a talk radio competitor.

Either way, Crute contends, the FM translator isn’t something WJMJ really needs: “WTMJ already has the most powerful signal in Wisconsin. They don’t need an FM signal, there’s no upside for them.”

WTMJ, however, sees things differently. Tom Langmyer, vice president & general manager of WTMJ/WKTI-Milwaukee, told Talkers magazine its all about broadening the audience: “It’s important to make the station’s services available to listeners on additional platforms. The exclusive FM radio cume [cumulative audience] will now be especially well-served by our commitment to live and local talk – and our 24-hour newsroom.”

Of course, if buying that FM translator was such a good business move for TMJ, why did they only do it after Crute came to town and pursued a deal for it?

Crute believes this is all about taking out a competitor in the local talk radio marketplace. “This deal is insignificant to them, but it’s devastating to me. This cuts us off at the knees.”

While WRRD is aimed at liberal listeners and TMJ at conservatives, there’s always been some liberals who listened at times to hosts like Mark Belling and Charlie Sykes because they wanted to hear a discussion of politics and current events. Sykes retirement has clearly hurt TMJ, which has seen some decline in ratings.

And Crute and Salvio have over the years had on conservative guests like Wisconsin’s Republican Senator Ron Johnson and conservative talk show host Vicki McKenna. So there could be some competitive advantage for TMJ to kill Crute’s opportunity to increase his audience.

Certainly Crute sees this as a David vs. Goliath fight. “They’ve picked a fight with the wrong guy and the wrong radio station,” he warns.

Crute has hired Rebecca E. Jacobs of the law firm Womble Caryle Sandridge & Rice LLP to file an objection with the FCC to the construction permit for McCoy and the E.W. Scripps Co. (which has owned WTMJ since its buyout of the Journal Sentinel company, whose newspaper operation was subsequently sold to Gannett publishing).

Crute notes that the construction permit that was jointly taken out by him and McCoy stipulates the ownership “may not be transferred for four years.”

But in the complicated, cut-throat world of radio, and at a time when the FCC has a new leader and board members, it’s anybody’s guess whether Crute’s objection will be upheld. Crute argues his station helps “level the broadcast playing field” by providing the only non-conservative talk radio station in the Milwaukee metro area. But that’s not likely to concern the Trump administration.

Win or lose, Crute says, he intends to keep his station going. But without the FM translator, the station will likely have a smaller audience and less value in the marketplace.

Update 8:45 a.m. July 21: Tom Langmyer contacted me to make several points. He noted that most radio listeners listen to FM, not AM (just 21 percent according to Nielsen ratings), so adding the FM translator will strengthen WTMJ. He said that his company was “approached by a broker, working on behalf of McCoy, to see if we had interest in the ability to add FM service on his translator.” And he denied that his company wants to hurt a competitor, saying this: “Keeping radio strong as a choice for audio users is a good thing for our industry. If there are more restaurants on a street, there are more people who will visit that street. Think of radio that way.”