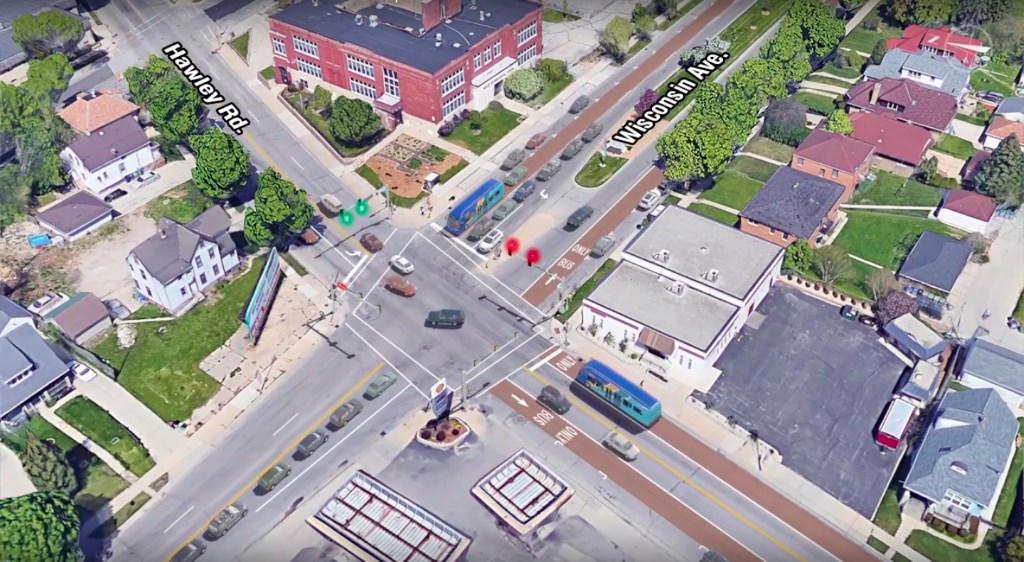 There is no love lost between the Milwaukee Common Council and Milwaukee County regarding the county’s East-West Bus Rapid Transit proposal.

Last July the city approved a resolution that advanced the project and allowed the county to apply for a federal grant for the approximately nine-mile long project. But the resolution came with a few caveats that restricted the use of parking lanes as dedicated lanes in specific areas and requested that the county keep the city in the loop regarding project design and engineering. Still, the project seemed poised to advance with relative ease.

Flash forward a a year and aldermen Michael Murphy and Robert Bauman are arguing that the project team “has broken good faith” in designing and engineering the project. The two council members, who represent the areas the route would run through, are co-sponsoring a resolution that would further clarify the city’s position on the project and all-but eliminate the potential of dedicated lanes on W. Bluemound Rd. The proposal had a public hearing at Wednesday’s meeting of the council’s Public Works Committee.

Bauman, in a near scorched-earth style speech explaining the need for the resolution, stated “we could wait until the end of the process, but we want to make this clear up front, before this goes too far down the road, before it goes in as a formal grant application.” The alderman, who represents Downtown and the near West Side, laid out the resolution which declares that the city controls the streets the county intends to use and that “if they seriously want to talk about improved public transit in Milwaukee then the City of Milwaukee needs to be a full partner with a seat at the table.”

Bauman, a long-time public transit supporter and rider, isn’t outright opposed to the project, but clearly outraged by the county’s engagement with the city on the project. He characterized the BRT project’s design as “very narrow and shortsighted” and noted “we have boxed ourselves into a bus-only, street-only corridor.”

The alderman stated “on my recent trip to Cleveland where I rode bus rapid transit ad nauseum, I learned, I think, we’re putting bus rapid transportation on the wrong corridor.” In an interview after the hearing Bauman suggested that a study should have been done on the cost of creating a route parallel with the Canadian Pacific railroad tracks starting at N. 38th St. and ultimately running to the Wauwatosa Village. He noted that a similar route was proposed when a regional light rail system was discussed in the 1990s.

Bauman also expressed frustration during the interview that the county is not working with the city on a planned state-funded rebuild of W. Wisconsin Ave. The rebuild is expected to occur next year and could include separation for the dedicated lanes and relocated medians, but the Bus Rapid Transit project team is not actively engaged in planning that redesign.

Murphy, who represents the western portion of the proposed route through the city, wasn’t as fiery as Bauman in his comments (few council members are), but clearly isn’t happy with how things have gone, either. He noted he has attended all of the public hearings on the project and held a number of meetings with neighborhood and business organizations along the route. Regarding a project designed to move thousands of people daily, he stated: “I’m very concerned about the potential impact on the ability of residents to move in this corridor.” In particular, Murphy said he learned in a meeting with executives of the Hal Leonard Corporation, the nationally-known producer of sheet music, that the company might move due to the project’s impact on pullout times for employees from its parking lot onto Bluemound Rd., which could increase from three minutes to six minutes. The firm employs approximately 150 people at 7777 W. Bluemound Rd.

Are the two council members alone on this? Not according to Bauman who stated, “I might add that [the Department of] Public Works is completely on board with this resolution.” Ald. Jim Bohl noted that the resolution likely has unanimous support from the full council, stating “to me this is a waste of time” and “a lesson in futility… I see this passing the council 15-0.” Like I said, no love lost between the two governments on this issue.

Representing the county was project consultant Ashley Booth of HNTB. Booth had to perform a delicate dance on the issue because he also works for the city as a consultant on the streetcar project. But his relationship with the city didn’t appear to earn him any protection: at one point Bohl suggested the firm should be fired for studying dedicated lanes in an area the city had previously expressed opposition to them. Bohl noted “you had the red flashing light and you decided to go.”

Booth, in his response to the issues raised by Bauman, noted that city engineer Jeff Polenske was a committee member on a feasibility study for the project. Booth noted that this study did engage in mode analysis and studied other options including light rail and commuter rail, but ultimately settled on bus rapid transit. He told the committee the project team has worked extensively with area stakeholders along the route.

Committee member Ald. Nik Kovac weighed in on the measure, stating “I don’t think anyone should complain we have ruined public transit by putting in local neighborhood conditions.” He noted that the streetcar project went through a similar process in routing around the most utility-laden streets in Downtown. After questioning if the county “has been a partner in good faith,” he opened the door to a future solution by noting “anything the council does we can undo.”

Committee chair Mark Borkowski, who was the lone alderman to vote against the proposal last year, was largely silent on the matter during today’s hearing.

The only member of the public to speak at the hearing was Karyn Rotker of the American Civil Liberties Union. Rotker asked the committee to hold the measure citing that the public was largely unaware of the proposal. While Bauman applauded her years of advocacy for public transportation, he quickly moved to vote on the measure, noting that holding the measure would push it back to September following an August council recess.

The four committee members in attendance unanimously approved the resolution. Alderman Bob Donovan had earlier left the meeting. It will go before the full Common Council on July 31st.

Though it was not discussed at the hearing, the legislation that was passed also contains a provision that the city “shall not incur any direct or indirect expenses” related to the development or operation of the system. This language is similar to legislation passed by Milwaukee County about the Milwaukee Streetcar. 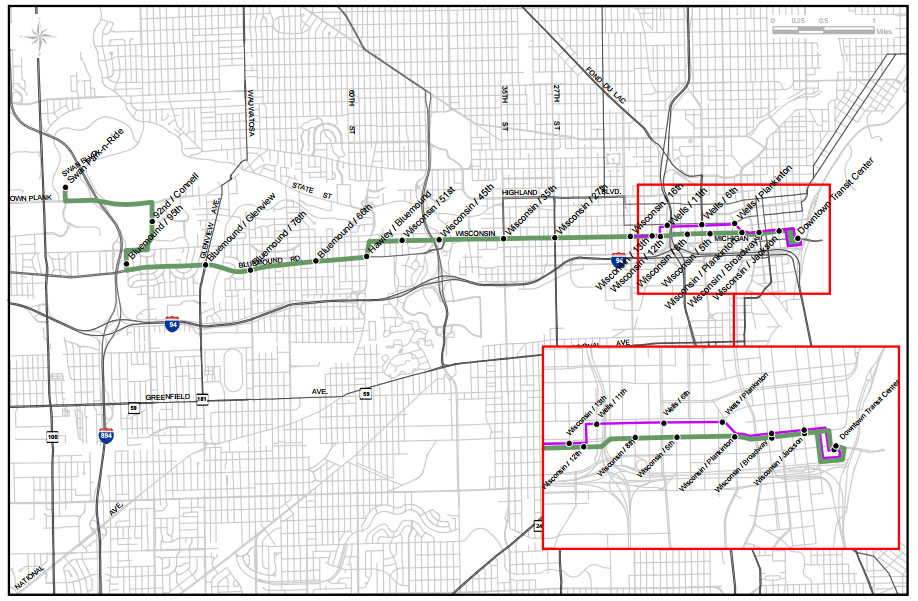 About the Bus Rapid Transit Proposal

The roughly nine-mile, 12-stop line would run from the site of the proposed The Couture tower on the lakefront and west on Wisconsin Ave. to Hawley Rd., and then along Bluemound Rd. before snaking through the Milwaukee Regional Medical Center to a park-and-ride lot on N. Swan Blvd.

The project has an estimated cost of $48 million. It is estimated it would be 80 percent federally funded. The system would be operated by the Milwaukee County Transit System.

Gains in ridership are expected to come from high frequency of services (every 10 minutes on weekdays, every five minutes during rush hours), fewer stops and off-bus ticketing (both leading to reduced travel time), better stations than traditional bus shelters and improved vehicles that would cost upwards of $1 million each. According to a study by the county the corridor would have considerable benefits for nearby residents: 23 percent of those living within a half-mile of the route lack an automobile in their household, far above the county average, statistics show. Along the route are major employment and job centers including Downtown (81,000 jobs, 25,000 residents), near West Side (40,000 residents, 30,000 jobs) and Milwaukee Regional Medical Center (16,000 jobs, 30,000 daily visitors).

The proposal will ultimately need the cooperation of both Milwaukee and Wauwatosa to secure dedicated lanes and stop locations.