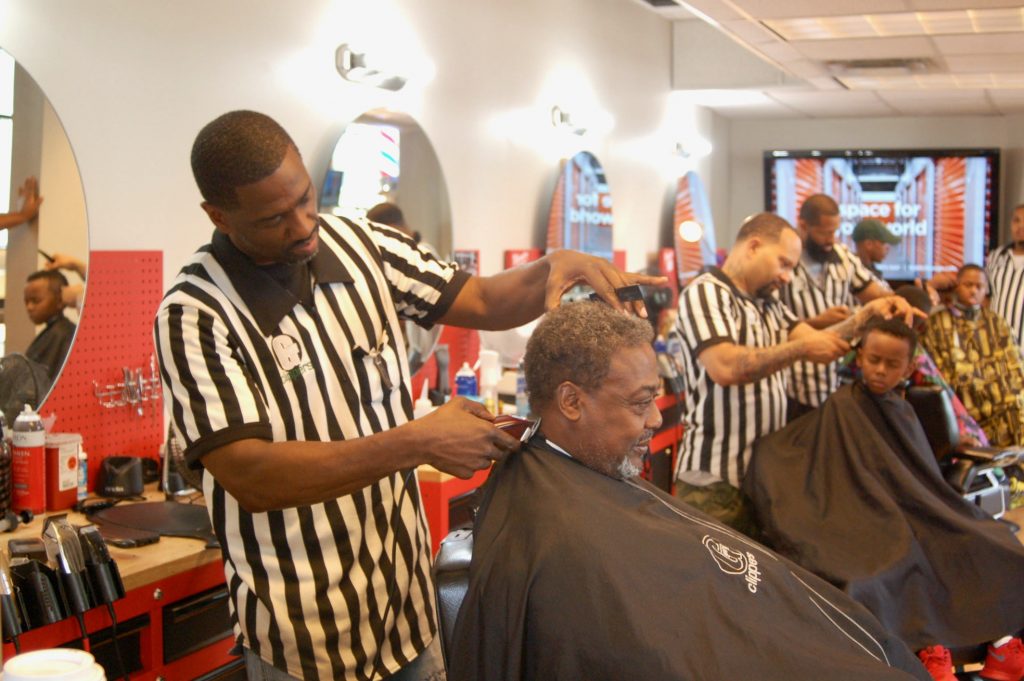 For James Nelson, a former pimp who left “the life” 32 years ago, talking to other men about the realities of sex trafficking is not intimidating or embarrassing.

“There’s no special way to do it. Sometimes we complicate things, when the simplistic approach is the best approach. So you just talk about it,” he said.

Nelson is engaging men in these conversations as a volunteer working on an anti-trafficking campaign that launched recently at Gee’s Clippers barbershop, 2200 N. Dr. Martin Luther King Dr. The Foundations for Freedom’s summer campaign, “Men4Men End the Demand” aims to raise awareness that buying sex and consuming pornography drive human trafficking, causing the enslavement of women and men.

The male volunteers are focusing on barbershops because that’s where men are found, said Dana World-Patterson, who co-founded (with Martha Love) and now chairs the Human Trafficking Task Force of Greater Milwaukee. They will also talk to men wherever they gather. 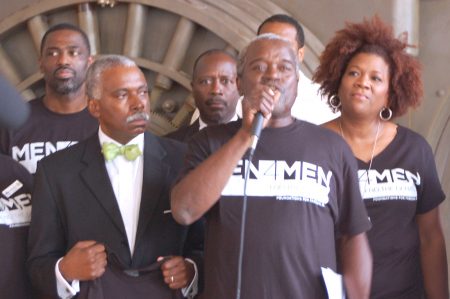 World-Patterson, who also founded the nonprofit Foundations for Freedom, discovered that human trafficking generated an estimated $32 billion in illegal profits annually, worldwide. A more recent study reports that the number has grown to $150 billion, said World-Patterson, the nonprofit’s CEO. Twenty-one percent of trafficking victims are subjected to sexual exploitation and the others to forced labor, according to the International Labour Organization (ILO).

Foundations for Freedom works to strengthen women and girls, reduce their vulnerabilities and eradicate human trafficking. Initially, it concentrated solely on trafficking victims but several years ago, World-Patterson said she began thinking about holistic approaches and speaking to traffickers.

That’s when the seeds of the Men4Men End the Demand campaign were planted. World-Patterson realized that there was power in men talking to other men “about the ills and devastation of human sex trafficking in a way that enhances responsibility, creates accountability and is supportive to end the demand.”

“I can talk to men but it’s going to be more impactful if it’s men talking to men. To end human trafficking, we have to address both the traffickers and the trafficked head on,” World-Patterson added.

Volunteers from faith-based organizations, workplaces and other groups have stepped forward. World-Patterson said she is “thankful for the men who volunteer believing that their voices will make a difference.”

Campaign chair Andre Lee Ellis said learning respect for women, children and families is important for the young men and boys he’s mentoring in his “We Got This” program.

“They must see me standing at the forefront of causes that are important to our community and to our families,” he said.

Sex trafficking is a secret that needs to be brought out into the open, especially in Milwaukee where “it’s more of a concern than in any of the top 40 largest cities,” said Milwaukee Health Commissioner Bevan Baker. “We’ve become a feeding ground for the Las Vegas Strip and many other places that take young girls and put them into prostitution and unspeakable lives,” he added.

The average age of sex trafficking victims is 11 to 13 years old, according to World-Patterson. Although the majority in Milwaukee are African-Americans, trafficking victims come from all races, socio-economic groups and age groups, from childhood through middle age, and it occurs in all 72 Wisconsin counties. Approximately 80 percent of victims worldwide are female and half are children.

“When we first started nine years ago, people thought trafficking victims were inner-city black girls with no fathers, living in poverty,” said World-Patterson. “But we knew that it was far beyond the inner city because the data, at that time, said it was a $32 billion industry.”

“The borders have been erased. It’s black, white, Asian, it doesn’t matter if you’re young or middle-aged. … The thread (that connects them) is vulnerability.”

Nelson, 63, explained that he got into selling women for sex because he was raised in an environment where all the older boys and men were “in the game,” pimping, hustling and dealing drugs. After getting out of prison in his early 30s he was helped by Bishop Sedgwick Daniels, spiritual leader of Holy Redeemer Institutional Church of God in Christ, and his family, who offered him career alternatives. Nelson has worked in social service since then.

Through his faith and experience working with Career Youth Development (CYD), a now defunct nonprofit that provided a variety of services to underprivileged and formerly incarcerated youth, he has learned the importance of taking action to right wrongs. “What we need,” Nelson said, “is for men to go forth and do something.”