How To Spend All Day at Summerfest

It ain't easy but we fested from gates open to gates closed.

What’s it like to spend all day at Summerfest? Having no decent answer to that question, I set out to spend all day at the Big Gig this year. With my wife in tow, we spent gates open to gates closed at the festival on Thursday. How much would we spend? How much free entertainment is there? Why does my wife like “Africa” by Toto so much?

What follows is a running diary of everything one encounters when trying to spend a day inside Henry Maier Festival Park.

11:57 a.m. – As I approach the festival grounds, I’m reminded that the business of Summerfest starts well outside of the festival grounds. Vendors line E. Chicago St. hawking everything from cold water and bratwursts to free Sprite soda samples and scalped tickets.

12:00 p.m. – The clock strikes noon and immediately the Main Gate speakers play “Welcome to Summerfest.” There are a lot of people in line.

12:02 p.m. – The guy next to me in line is already complaining about heat and how slow this “express” line is. I bet he’s fun to have over for dinner.

12:13 p.m. – Having met up with my wife Alison after making it inside, it’s time to begin the task of entertaining ourselves until the big name acts start playing. We spin the McDonald’s wheel right inside the gate (after making a donation to the Ronald McDonald House). Alison wins an UberEats-McDonalds partnership announcement, that might maybe be a coupon. I fare much better by winning a coupon for a McFlurry.

12:17 p.m. – It’s time to eat! Signs on every booth indicate that all beverages are half-off until 6 p.m. as part of the 50th anniversary celebration. In a hunger-introduced rash decision, I fixate on the first menu I read, Divino, and order a slice of pepperoni pizza ($6) and a Diet Pepsi ($2).

12:40 p.m. – With hunger pains disposed of, we head to recently rebuilt Miller Lite Oasis to watch AC/DC tribute band Billy Bon Scott perform. The lead guitarist is a ringer, at least from 75 yards away, for Angus Young. The goal is to see an artist at every stage, and I’m pleased with our Miller Lite Oasis pick.

1:11 p.m. – My favorite part of Summerfest might be walking by the Charcoal Grill’s outdoor grill. The smell of meat is so strong (and delicious) a vegetarian would have no choice but to order barbecued chicken.

1:19 p.m. – We get out photo taken with the VISIT Milwaukee MKE sign. The human-sized sign is missing the K in MKE and encourages you to stand in its place. It’s good placemaking that deserves a more prominent location. Also, I need to learn how to stand up straight in a photo (see below). 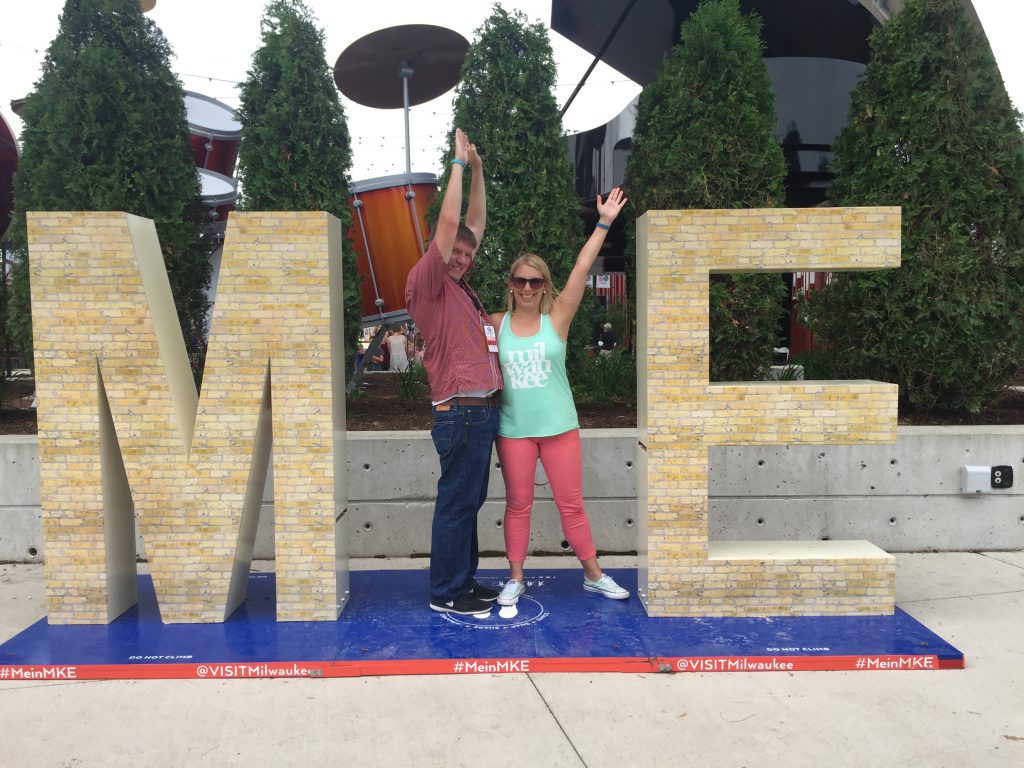 1:29 p.m. – I earn fourth place on the day playing the racing game Forza at the Bridgestone Experience. I also get a coupon for $70 off tires that I have no intention of using.

1:37 p.m. – We stop at JoJo’s Martini Lounge. Alison is using one of the many US Cellular phone charging stations sprinkled throughout the grounds. Meanwhile, we’re treated to The Toys front man Keanan Kopplin serenading us with a cover of David Gray‘s “Babylon.” We just missed the previous performer, “taped music.”

1:57 p.m. – We swing by the vendor village at the south end of the grounds to visit Fred Gillich and see his latest line of Too Much Metal gear. He shows us his second booth, having been offered a second space at the last minute by Summerfest. Gillich has cooked up a number of 50th anniversary t-shirts, including one shirt that lists all of the shows he has attended.

2:11 p.m. – We talk to a pin salesman from Cincinnati who claims to spend all but two weeks of the year on the road at festivals. How one makes it selling pins three for $12 I have no idea, but this guy is proof that it can be done.

2:16 p.m. – I wager a guess of 1,614 items in the Meijer/ESPN Radio “how many items in the cart” guessing game. Alison wagers 2,620. A day later neither of us has been notified that we won, but we’re probably already receiving junk mail from having given them our email addresses. The price of free entertainment.

2:20 p.m. – Finding that we haven’t spent any cash in over a hour, we drop a quarter into “The Ultimate Foot Massage.” As the self-serve, vibrating chair advertises, I somehow feel rejuvenated.

2:33 p.m. – We take a seat on one of the benches at the Briggs & Stratton Big Backyard stage to hear One Lane Bridge. Without a doubt, we are the youngest people at this show by a wide margin. We’re treated to a rousing harmonica solo and then a lengthy parade of guest singers. 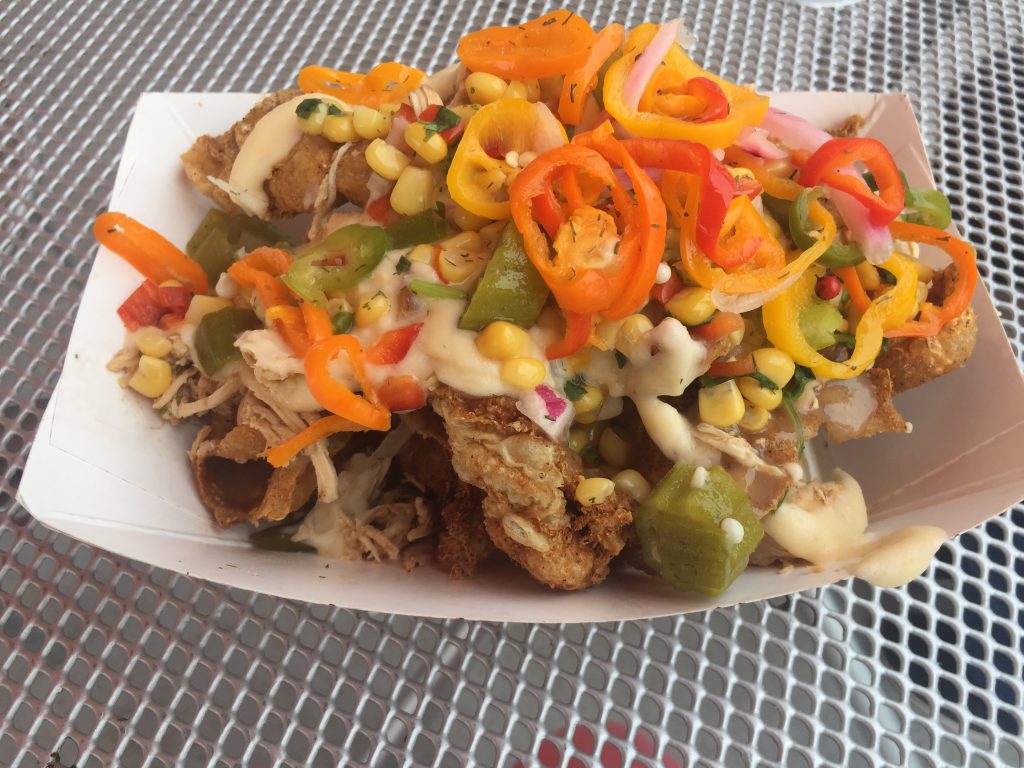 2:45 p.m. – It’s back to the Water Street Brewery to try the Yard Dog Nachos ($7.50). They’re one of the new foods this year, and feature fried chicken replacing tortilla chips.

2:50 p.m. – “We’ll we’ve had those” says the wife in a rather matter-of-fact fashion. They’re neither as amazing as the pizza cone, nor as bad as the many one-year wonder food offerings that dot the festival. 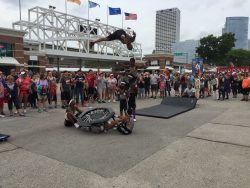 3:11 p.m. – The parade, which operates in second-line style where you follow it around, stops at the main gate so the Milwaukee Flyers can do an impressive array of flips. Other performers include a drum corps, mimes and a very-smooth guy on stilts.

3:22 p.m. – We swing by the Uline Warehouse stage to hear the Salford Lads Club.

3:42 p.m. – We kill some time in the Playstation 4 Experience. Air conditioning and free video games. Plus, I got a free pair of sunglasses out of the deal.

3:59 p.m. – We’re taking a short break atop the new American Family Insurance structure just inside the main gate. The rooftop of the space comes with a great view of all the kids playing in the splash pad. A related thought – a lot of people show up to Summerfest in swimsuits, a bizarre phenomenon. 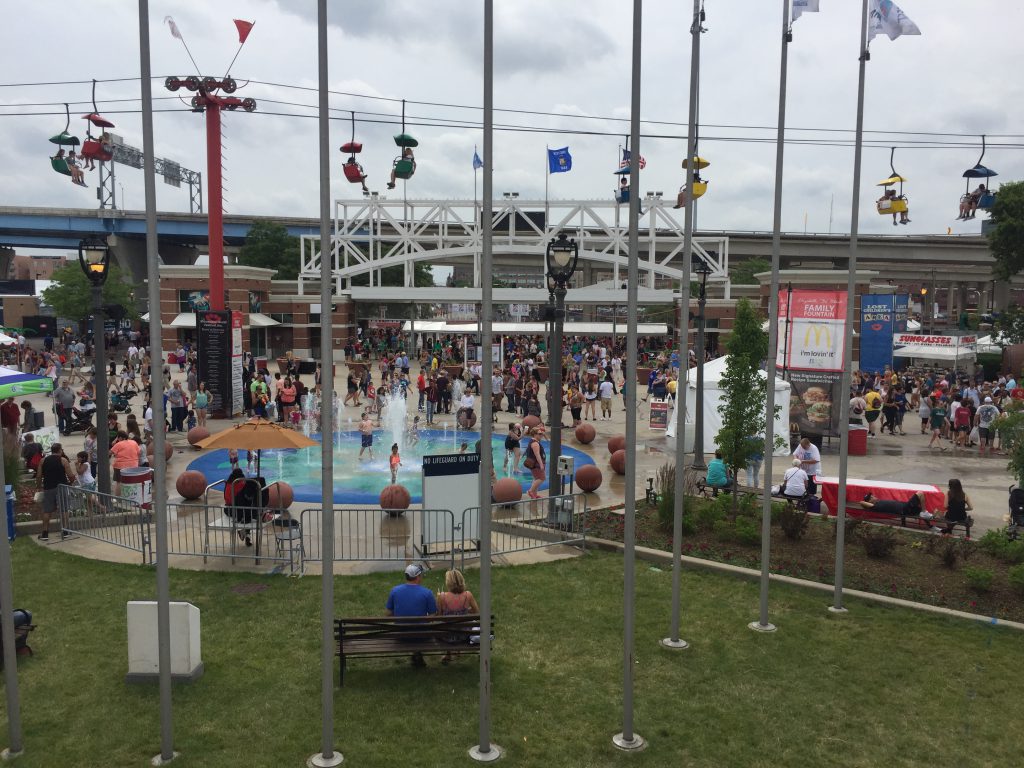 4:08 p.m. – Unknowingly, this is somehow a physical endurance contest. I’m not sure why, or how, but my body is sore and we are only one-third of the way to closing time.

4:15 p.m. – Walking by the Harley-Davidson Roadhouse stage we determine glam metal band Slaughter is definitely not our thing.

4:29 p.m. – Fighting off the mid-day duldrums, we settle into a waterside table at Saz’s Docside Barbecue. The table is comfortably within earshot of Foghat rocking away at the BMO Harris Pavilion, but we’re not here long enough to hear “Slow Ride.” I order a pulled pork sandwich with fries ($9.50) and the lady opts for a pulled chicken sandwich with fries ($9.50) and a Diet Pepsi ($2.00). Both live up to the quality you would expect from Saz’s.

4:34 p.m. – The airplane circling overhead has switched its banner advertisement from Rum Chata to Trojan Bareskin condoms. Going from booze to pregnancy prevention is an impressive haul of ads for that pilot.

5:10 p.m. – We swing by the Gruber Law Offices Sports Zone to see people attempting to complete a hockey puck carrying race. The Milwaukee Admirals are handing out tickets to all that want them, even the girl that tells the audience she’s in town from Venezuela. For those that can’t get enough of Gruber, there is a lifesize print of David Gruber in a pinstripe suit outside the Gruber Law booth just outside the sports area.

5:20 p.m. – We see a girl filming herself with a selfie stick while she sings and plays guitar while riding the sky glider. Five bucks to the first person that can find that music video. 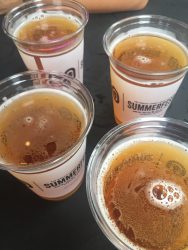 6:50 p.m. – It’s time for us to ride the sky glider. The views are quite impressive heading north with the skyline framing the grounds. Our timing couldn’t be better. Despite things being busy all day, the grounds are really packed now.

7:04 p.m. – Alison tells me to rub her shoulders and within 30 seconds of starting a women tells her she has a great husband. No, I did not pay this woman.

7:15 p.m. – While we charge my phone, we play a game of “Luke Bryan concert or not?” The country star is playing the American Family Insurance Amphitheater tonight and spotting his fans turns out to be like shooting fish in a barrel. Cowboy boots are a dead giveaway.

7:26 p.m. – We briefly stop by the Uline Warehouse stage again, this time to see Willy Porter and Carmen Nickerson perform.

7:35 p.m. – Even more briefly, we swing by the US Cellular Connection Stage to see New Wave cover band Radio Radio.

7:47 p.m. – We’re at the Johnson Controls World Sound Stage to see local group GGOOLLDD. It’s packed! We’re left to find a spot standing on a picnic table in the back. We procure Blue Moon Summer Honey Wheats ($17.00) missing the good old days when drinks were half off.

8:40 p.m. – GGOOLLDD put on a show. Lead singer Margaret Butler made up for the lack of a voice with an all gold outfit. The show must go on, but not for us. We’re off to secure a seat at the BMO Harris Pavilion for Toto.

9:04 p.m. – We arrive to find the whole stage left area of seats wide open. Most people aren’t aware they’re there and free. We slide into seats in the fifth row while Milwaukee cover band the Five Card Studs jams to “Play That Funky Music White Boy.”

9:10 p.m. – In only-in-Milwaukee fashion, there is a large man two rows behind us with no shirt on and a bumper sticker over his belly button.

9:33 p.m. – Fireworks! The “big bang” was postponed last night, but is going off without a hitch. Our seats are covered, so we can’t see everything above us, but the reflection off the new Northwestern Mutual tower is impressive. 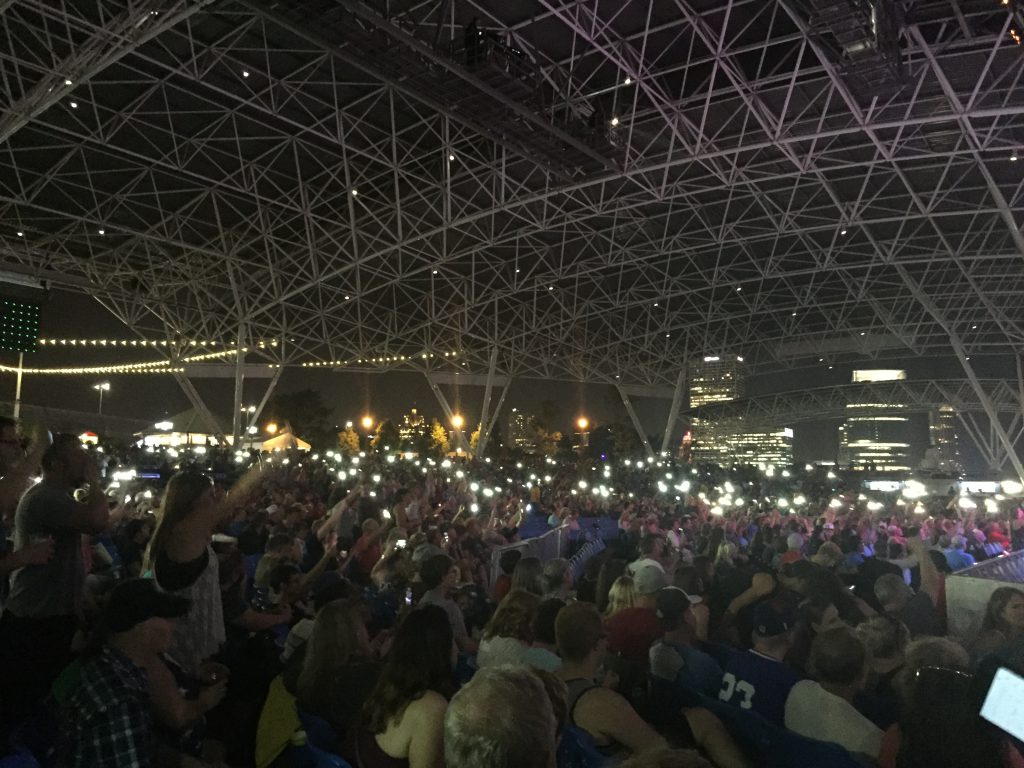 11:00 p.m. – While the band members are each introduced, an old guy appears standing above me. Yelling at the people standing behind me he repeatedly screams “sit down we can’t see.” The people sit.

11:14 p.m. – Random guy in the bathroom says “I have the setlist, stop fucking with us and play the good stuff.”

11:30 p.m. – The band plays the opening notes of Alison’s favorite song, Africa, and the rest of the crowd goes nuts. Mid-song a lady just in front of us jumps the fence, runs up the stairs and hugs the lead singer. While the band appears to take it in stride, a guitar techie immediately comes to yell at the nearest security guard and blocks the stairway for the duration of the song. 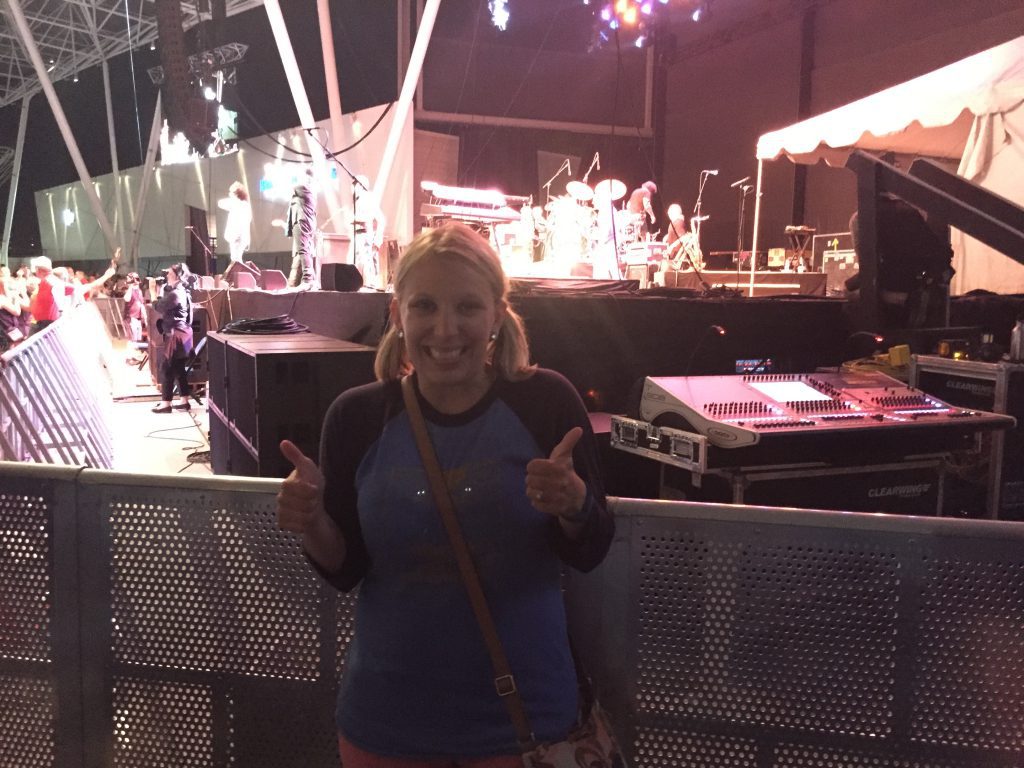 12:00 a.m. – We’ve been here twelve hours and finally meet up with friends that just attended the Steve Aoki show. We’re told, predictably, that it was a much younger crowd than Toto. We didn’t expect to be treated to stories about one of our friends having to call an ambulance over for a much younger guest that was bleeding from the head.

12:10 a.m. – We try unsuccessfully to order food post-show. While the guards aren’t chasing us out, the vendors are sure ready to leave.

12:21 a.m. – We finally find the Brady Street shuttle and are headed home.

12:42 a.m. – We make it to Brady Street. We have survived twelve hours of Summerfest!

3 thoughts on “Eyes on Milwaukee: How To Spend All Day at Summerfest”