By Gretchen Schuldt, Wisconsin Justice Initiative - Jun 20th, 2017 03:10 pm
Get a daily rundown of the top stories on Urban Milwaukee

The American Civil Liberties Union of Wisconsin last week filed a few pictures showing how youths in solitary confinement are treated when they are actually let out of their cells.

The pictures were filed in support of a request by the ACLU and the for a temporary injunction to halt the use of pepper spray, mechanical restraints, and solitary confinement except under very limited, urgent situations.

The defendants in the suit, meanwhile, admitted holding youth for more than 50 consecutive days in solitary confinement and pepper spraying youths who were in their cells or in mechanical restraints, among many other things. The document of admissions can be found here.

The ACLU, along with the Juvenile Law Center and with pro-bono assistance from Quarles & Brady LLP, is suing on behalf of past and current inmates of Lincoln Hills and Copper Lake youth prisons, alleging the extreme disciplinary practices at Lincoln Hills and Copper Lake violate the inmates’ constitutional rights against unreasonable searches and cruel and unusual punishment and their right to due process. The suit alleges the institutions make routine use of strip searches, chemical sprays, solitary confinement and mechanical restraints.

The case has been assigned to U.S. District Judge James D. Peterson.

Lawyers for defendants in the case argued in a separate document that a court-ordered limit on the the use of pepper spray, solitary confinement, and mechanical restraints could actually hurt efforts by state and school officials to cut back on those things.

The defendants, including Department of Corrections Secretary Jon E. Litscher, also object to the terms “pepper spray,” “on the belt,” and “solitary confinement.” Those terms are all “obsolete” and “inaccurate,” the defendants say. 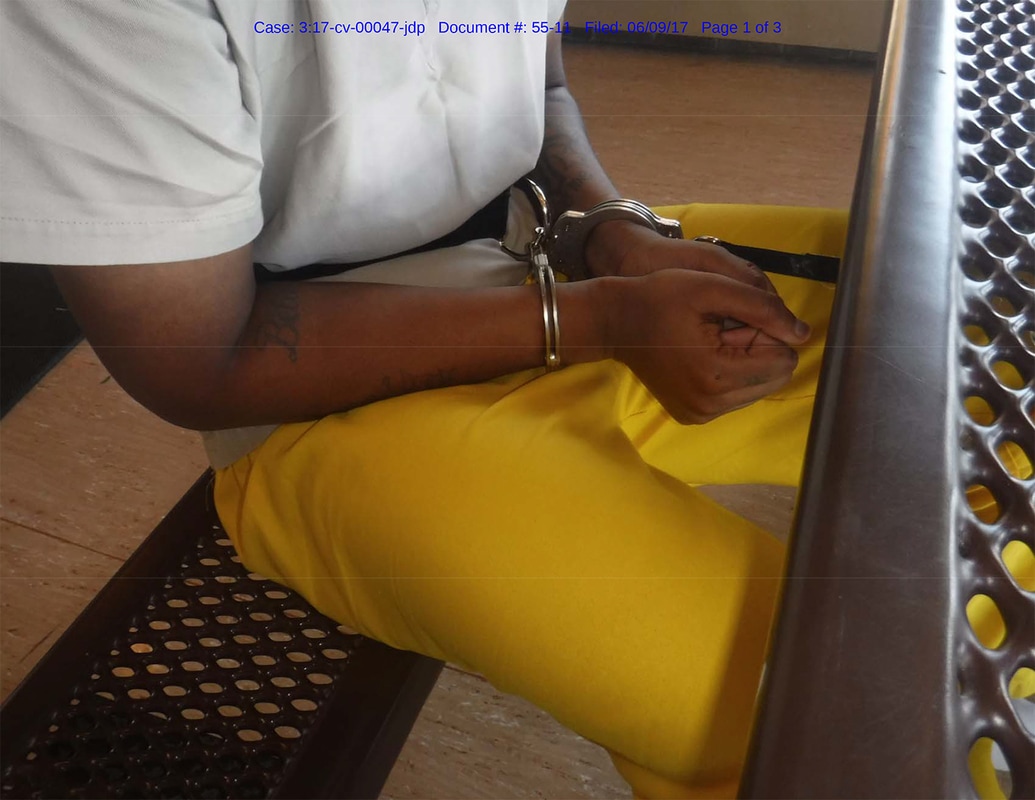 This picture shows one of the plaintiffs in the class-action lawsuit tethered to a table in a Lincoln Hills security unit, according to an affidavit filed by ACLU attorney Larry Dupuis. The youth is “on the belt,” meaning his wrists are handcuffed to a belt circling his waist. 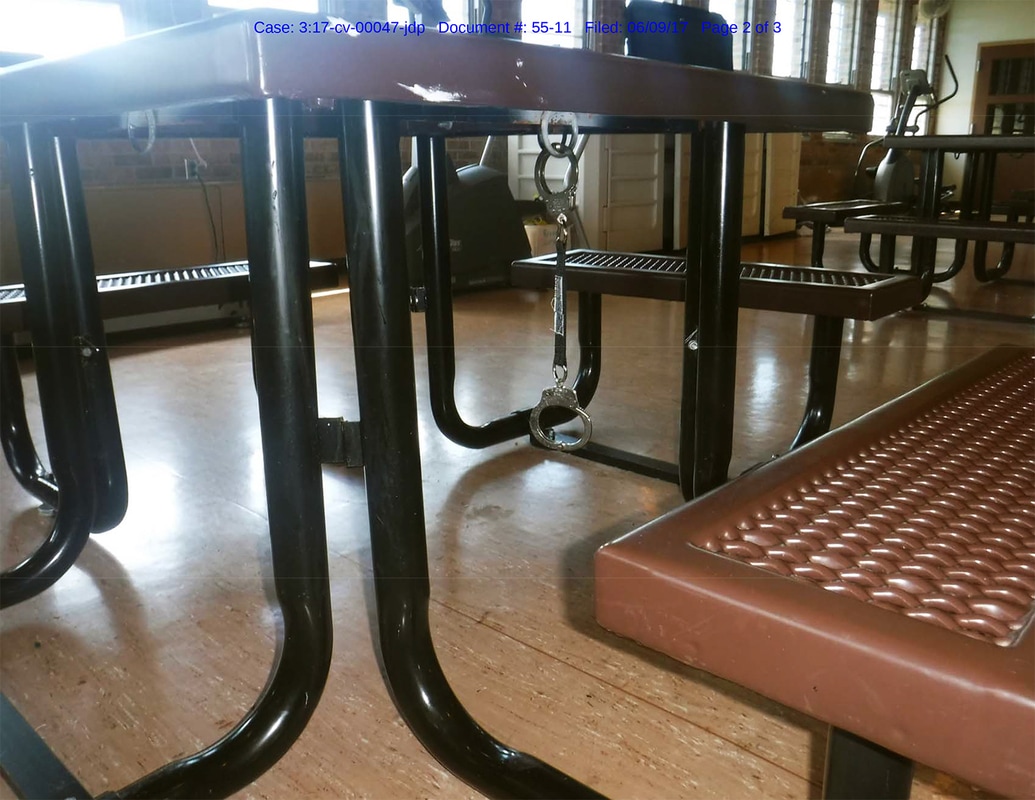 This picture shows a tether and handcuff set dangling from a table in the security unit. 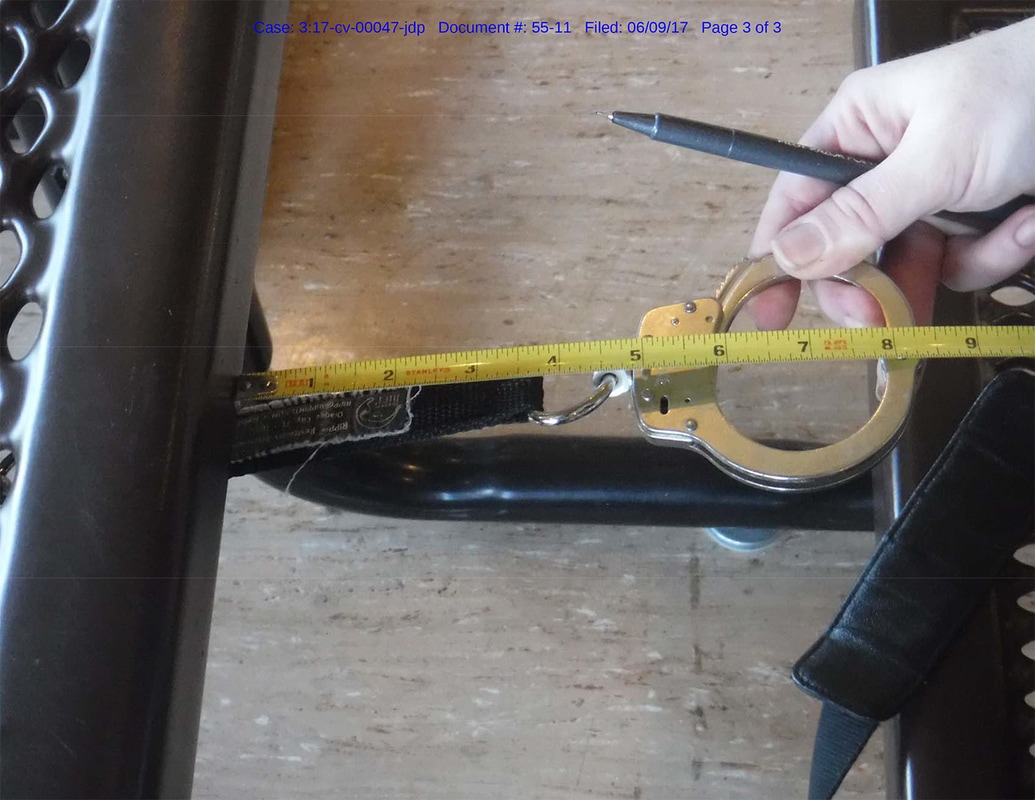 The picture shows the distance from the edge of the table to the handcuff when the connecting tether is pulled taut. In other words, it shows the limited freedom of movement the youth has when out of his cell and tethered to a table, a common practice, according to the lawsuit 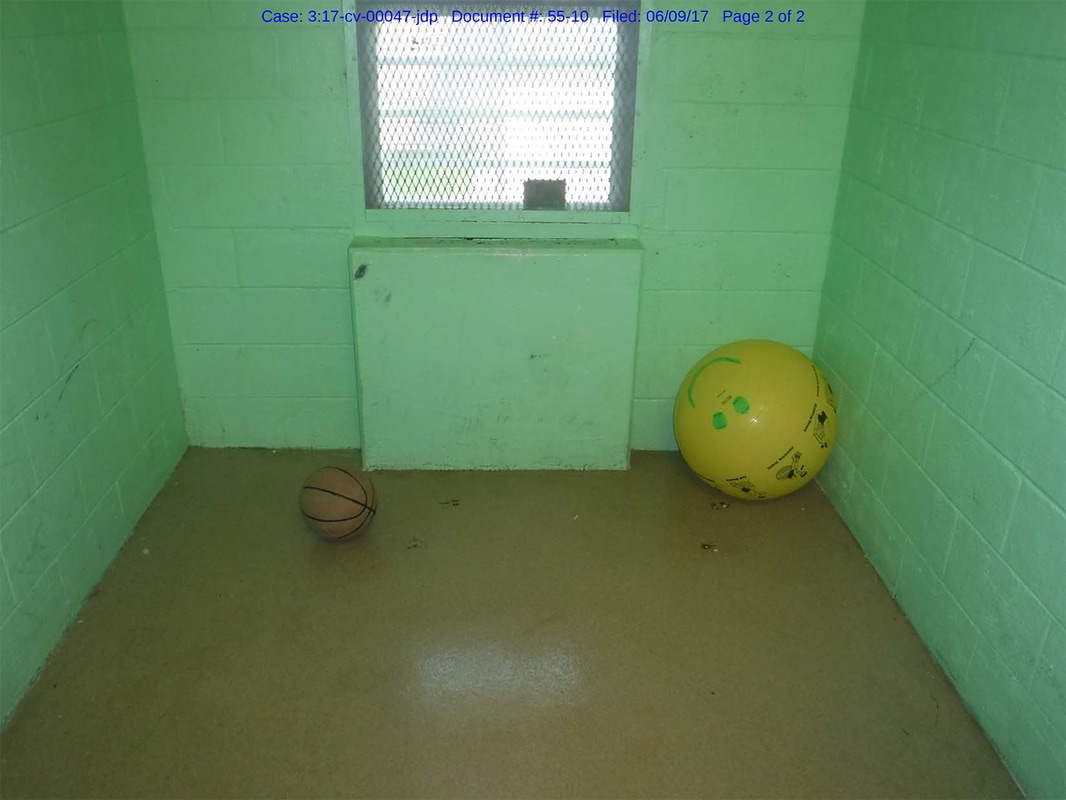 The state’s defendants say youth in solitary are let out of their cells for recreation time. Here is a cell used as a recreation room in the security unit at Lincoln Hills.

Here are some of the things the defendants admitted (while maintaining their objections to the terms above), according to a court filing:

One thought on “Court Watch: Pictures of Youths in Prison”