By Keith Schubert, Milwaukee Neighborhood News Service - Jun 8th, 2017 10:14 am
Get a daily rundown of the top stories on Urban Milwaukee 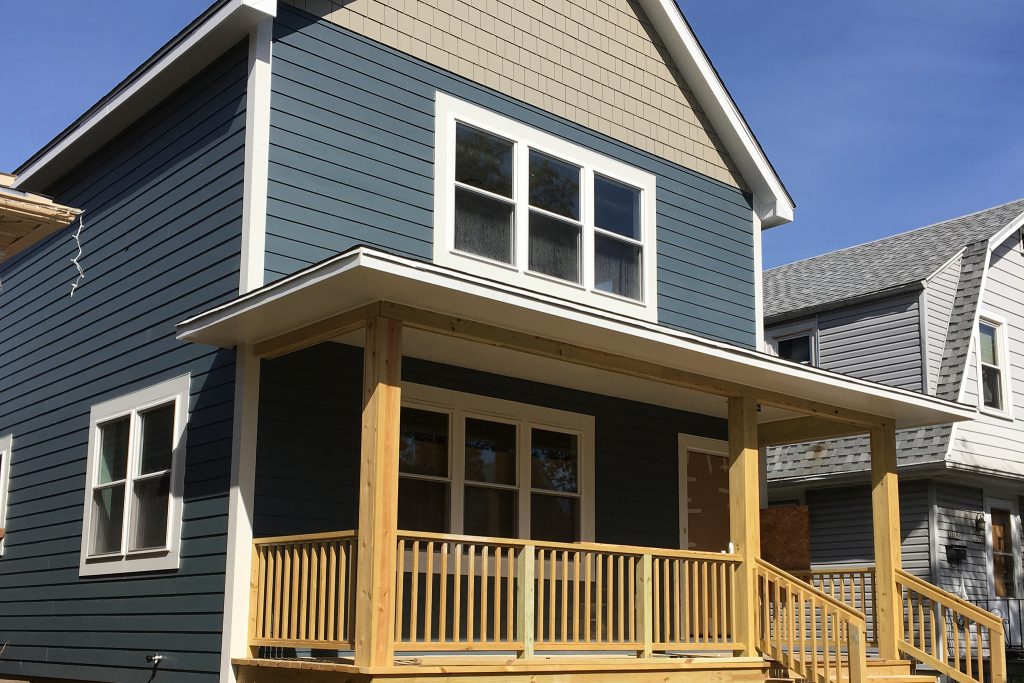 An open house on Sunday showcased the first newly constructed home in the Layton Boulevard West Neighbors nine-year-old Turnkey Renovation Program. The program was created to help stabilize the neighborhood by renovating vacant and city-owned houses into move-in-ready homes for purchase.

LBWN decided to switch things up when Wells Fargo donated the property at 2221 S. 29th St. in Burnham Park to the group after the original house burned down. LBWN broke ground on the new house last September.

“The pieces just sort of fell in our lap,” said Shannon Boone, program manager at LBWN. 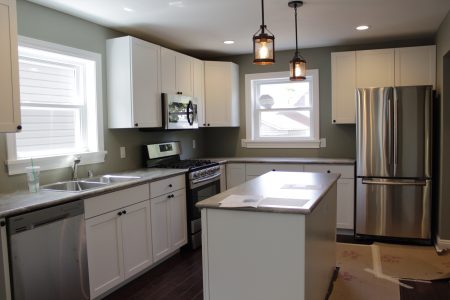 The house features new energy-efficient appliances in the kitchen. Photo by Keith Schubert.

Since its formation, the Turnkey Home Renovation program has invested more than $3.5 million to purchase, renovate and sell 20 bank and city-owned homes in Silver City, Burnham Park and Layton Park.

Like previous Turnkey projects, the four-bedroom, two-bath house is a “net zero” home, meaning the total amount of energy used by the building annually is about equal to the renewable energy created on the site.

The house features 6-inch foam-insulated walls, 260 square feet of solar panels, triple pane windows, a 95 percent-efficient furnace and WaterSense certified faucets, which means they are at least 20 percent more efficient without sacrificing performance. The hope is that saving money on energy will leave the owners with more expendable income, said Boone.

Nevertheless, some residents are concerned that the house, listed at $134,000, is too pricey for the neighborhood.

“With this house being more expensive, it might lead to gentrification. I don’t see people who would normally live in this neighborhood being able to afford this house,” said neighborhood resident Beth Veglahn. Veglahn and her husband Jeff bought their house right outside the Layton Boulevard neighborhood for about $90,000 four years ago. The current median home in the 53215 ZIP code, where the new Turnkey home is located, is $91,300 according to Zillow.

Boone said that LBWN has systems in place to combat gentrification. The buyer must have an income of less than $57,900 (80 percent of the Milwaukee County median income) and live in the home for five years. This will prevent “flippers” from buying the house to turn a quick profit.

With a 3 percent down payment of $4,020 and a 30-year mortgage at 4 percent interest, Boone estimated the cost would be $1,000 per month, including taxes and insurance. Zillow has two four-bedroom homes listed for rent in the ZIP code; one costs $895 per month and the other $1,200, putting the Turnkey home right in the middle.

“I feel good about our price. It’s a great deal in today’s market and still very affordable for many families,” said Boone.