But no award from jury for being shackled while delivering her baby.

By Gretchen Schuldt, Wisconsin Justice Initiative - Jun 8th, 2017 11:01 am
Get a daily rundown of the top stories on Urban Milwaukee

“The right of incarcerated women to be free from sexual victimization by their captors is a basic human right recognized by a jury … in fewer than four hours today,” said Shellow, one of the lawyers representing the inmate.

The jury also found that the jail’s policy of restraining women during labor and childbirth was not rationally related to a non-punitive need, but that the woman was not harmed by being shackled to her hospital bed during her 20-hour labor and delivery. The jury did not award damages.

The jury also found that Thicklen was acting within the scope of his employment when he raped the woman and forced her to perform oral sex, meaning the county is on the hook for the jury award. U.S. District Judge J.P. Stadtmueller said at the start of the three-day trial, however, that he expected the scope of employment issue to wind up before the 7th Circuit Court of Appeals no matter which side prevailed.

A class action lawsuit accusing the county of improperly shackling inmates during labor and delivery is pending.

The woman’s case was argued by the Loevy and Loevy law firm, which also is representing the women in the class action lawsuit. 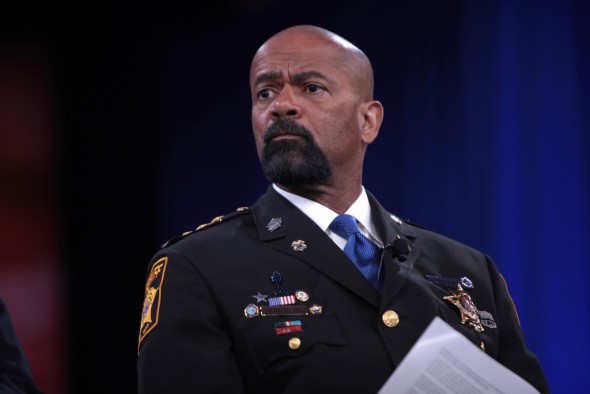 The jail is under the purview of Sheriff David Clarke, who says he is accepting a job with the Department of Homeland Security. That department has not confirmed Clarke’s appointment.

Thicklen resigned from his job when his activities came under investigation. He eventually pleaded guilty to felony misconduct in office for the assaults, and served three days in the House of Correction. He did not attend the three-day federal civil trial held before U.S. District Judge J.P. Stadtmueller.

Thicklen raped the woman in the jail when she was 19 and eight months pregnant. Four days after she gave birth, he demanded she perform oral sex, according to testimony. There was additional sexual contact as well.

“I felt like, ‘is this ever going to end,’ ” the woman testified. “Am I going to get away from him. … It made me feel like I didn’t have a choice any more.”

The woman said she finally spoke up about the assaults only because she worried that she may have contracted a sexually transmitted disease from Thicklen and passed it on to her new-born daughter.

The county did not dispute the accusations against Thicklen, but said he was not acting within the scope of his duties.

“You cannot determine what their intent is …. I see every inmate that leaves the jail as a risk,” Nyklewicz said.

Nyklewicz, though, also said that the policy is not absolute, and that the shackles chaining the inmate to the bed could be removed by deputies if medically necessary. Edward Bailey, a retired Sheriff’s Department inspector, said a patient also could be unshackled to participate in something like physical therapy, if a Sheriff’s Department supervisor agreed.

In some cases, Nyklewicz said, the jail will contact a judge to allow a hospital-bound inmate facing minor charges to be released on a personal recognizance bond so the inmate can go to the hospital on his or her own.

The plaintiff in the case was in jail as a pre-trial detainee on a charge of robbery with threat of force and on a warrant for failing to report to her Mississippi probation officer.

The inmate’s midwife testified that a deputy refused a request to unshackle the woman.

“The nurse and I wanted them removed,” the midwife, Emily Malloy, testified. Freedom of movement is important to women in labor because, she said, “women will move themselves to get in a better position to allow the baby to move through.”

In addition, she said, research shows that moving around reduces pain experienced by women in labor.

The inmate testified the shackles caused pain, and embarrassment and did not allow her to move as she wanted to. The shackles left bruises on her wrists and ankles, she said.

More about the Jane Doe Vs. County of Milwaukee Case