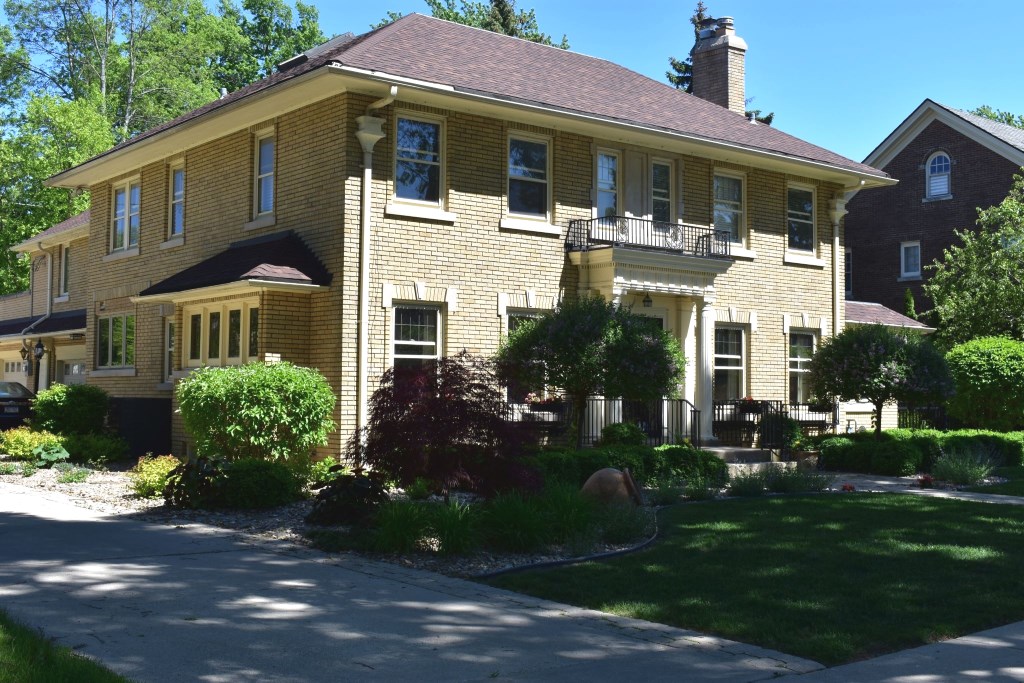 Earnell Lucas has one of the most specialized jobs in public safety, serving since 2012 as Senior Director of Security & Facility Management for Major League Baseball, where he is “responsible for establishing and directing all of MLB’s security and facility management policies, procedures and programs,” according to the press release announcing his appointment. Previously, he was the security officer for Commissioner Bud Selig for six years, following a 25-year career in the Milwaukee Police Department.

Earlier this week, Lucas kicked off his campaign to become Milwaukee’s next sheriff at an event at Best Place. His opponent may (or may not) be Sheriff David A. Clarke, Jr., who may (or may not) be the incumbent at the time of the election. Clarke last month unilaterally announced that he was to be appointed to a position in the Department of Homeland Security, which has not as yet been confirmed by the administration.

If victorious, Lucas would vault immediately into the highest ranks of the best-housed elected officials in town. Among previous House Confidential Honorees, only County Executive Chris Abele and Supervisor Sheldon A. Wasserman live in more valuable homes. The Lucas home’s assessed valuation of $621,000 is more than twice that of Clarke’s northwest side home. Let’s go on patrol and have a look for ourselves.

The substantial yet restrained brick home was designed in 1921 by George Schley and Sons architects at what was then 1050 Shepard Ave. an East Side home near the city’s border with Shorewood. The house was built for Edwin C. Ostermann, the Secretary-Treasurer of the Fried-Ostermann Co., a manufacturer of gloves. The firm’s plant was on S. 2nd St. at the southwest corner of W. Lapham Blvd. Ostermann was also the Treasurer of the Albert Richard Co., located at the same address, a manufacturer of leather and sheep-lined outerwear. Assuming that the firms had had military contracts to outfit soldiers during the Great War, it is likely that profits from the sales were robust enough to afford the construction of this $21,000 home.

By 1930 Ostermann was out, retired to a suite of apartments at the Shorecrest Hotel, and the home was owned by Walter Alexander, who paid $36,000 for the home on June 10th, 1930. Alexander settled in for 25 years, but was only able to net a $1,000 gain on his investment when he sold it for $37,000 in April, 1955 to Robert Selle. The old home was showing its age, and Selle went to work installing a washer, a dryer and a garbage disposal. In November, with the wintry winds rolling in off of the lake, Selle hired architect Ernest Fischer to “enclose porch to become a study,” for $3,000. Paul Klatt was the contractor. In August, 1957, Selle put an addition on the rear of the home for $4,000. “Wants to put addition on the rear of the house. Upper floor only on steel columns. Very complete plan,” the inspector noted on his preliminary inspection.

A Fence Without a Permit

Bugbee was an outstanding citizen, serving for 40 years as the Vice President of the Falk Corporation. (See House Confidential: Tour a 1902 Eschweiler Mansion, May 2017). He also was board president of the Children’s Hospital, the Milwaukee Psychiatric Hospital and served on the board of Rogers Memorial Hospital in Oconomowoc. He was president of the University Club, a trustee of the Chenequa Country Club and, later, the President of the Board of Trustees of the Village of Chenequa, to which he removed after his retirement. Such exalted social status did not exempt Bugbee from the scrutiny of the building inspector. In 1964, the official took a look at the property and was alarmed to find “110 feet of 3.5 foot fence — chain link” enclosing the back yard. “NO PERMIT. Get double fee permit,” the inspector ordered.

A notice was served on the miscreant Bugbee on November 10th, 1964 to remedy the situation, and to remit the double fee forthwith.

We can imagine a shaken Bugbee, trembling with the summons in hand, racing to a luncheon at the Univeersity Club to ponder his plight — and to formulate his response.

On January 15th, 1965, Bugbee responded. “Fence was here 8 years,” the inspector noted. That was during the days when Selle owned the place. The damage was done, the fence remained, the city was out of its double permit fee and the Bugbee name remained in good stead among the hospital and club boardrooms of the community.

In November, 1989, the home was bought by Noemi A. Prieto and Gonzalo Barinaga, who paid $270,000 for the home, which was now rapidly appreciating in value. They held the home until 2012, when Earnell and Linda Lucas paid $580,000 for the residence.

It would be worthwhile to inspect the fingerprint records for the occupants of this house, because it looks like somebody here has a green thumb. The residence is robustly landscaped, with low hedges setting it off from the street behind a modest carpet of lawn. Two Japanese Lilacs, grown on standards, were in partial bloom, the flowers largely obscured by the foliage. This is due to a mistiming in pruning, in which a number of this year’s buds were removed in last year’s trimming. The time to trim Japanese Lilacs is immediately after the flowers fade, and before next year’s buds set, which is to say, sometime next week. A Japanese Maple continues the oriental motif, ablaze in its brilliant red foliage. A terra cotta urn lies on its side in a pebbled expanse, spilling forth a bounty of pale blue Forget-Me-Nots. Numerous other landscape plants are rather young, but have been thoughtfully provided with room to grow. A non-chainlink fence sets off the side and rear yards, also well landscaped, from what can be seen from the street. Altogether the effect is quite pleasant, and moderates the severity of the building’s symmetrical facade quite effectively. The structure itself is adorned with window boxes planted in colorful annuals, a sign that garden activities here are frequent and comprehensive.

There are no signs of deferred maintenance. This is a house that needs no correction. 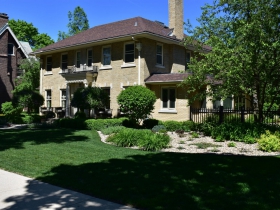 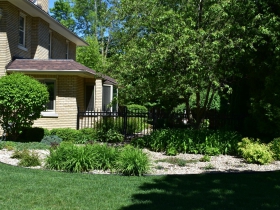 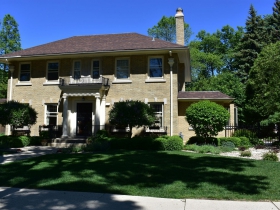 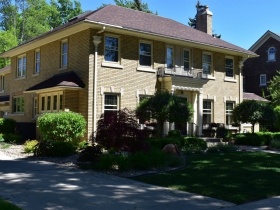 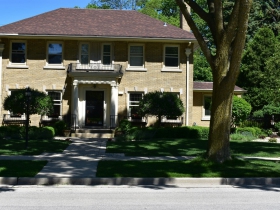 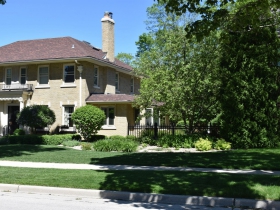 How Milwaukee Is It? The residence is 4.2 miles northeast of Milwaukee City Hall.