Solar on Every Rooftop

By Kari Lydersen, Energy News Network - Jun 2nd, 2017 01:30 pm
Get a daily rundown of the top stories on Urban Milwaukee 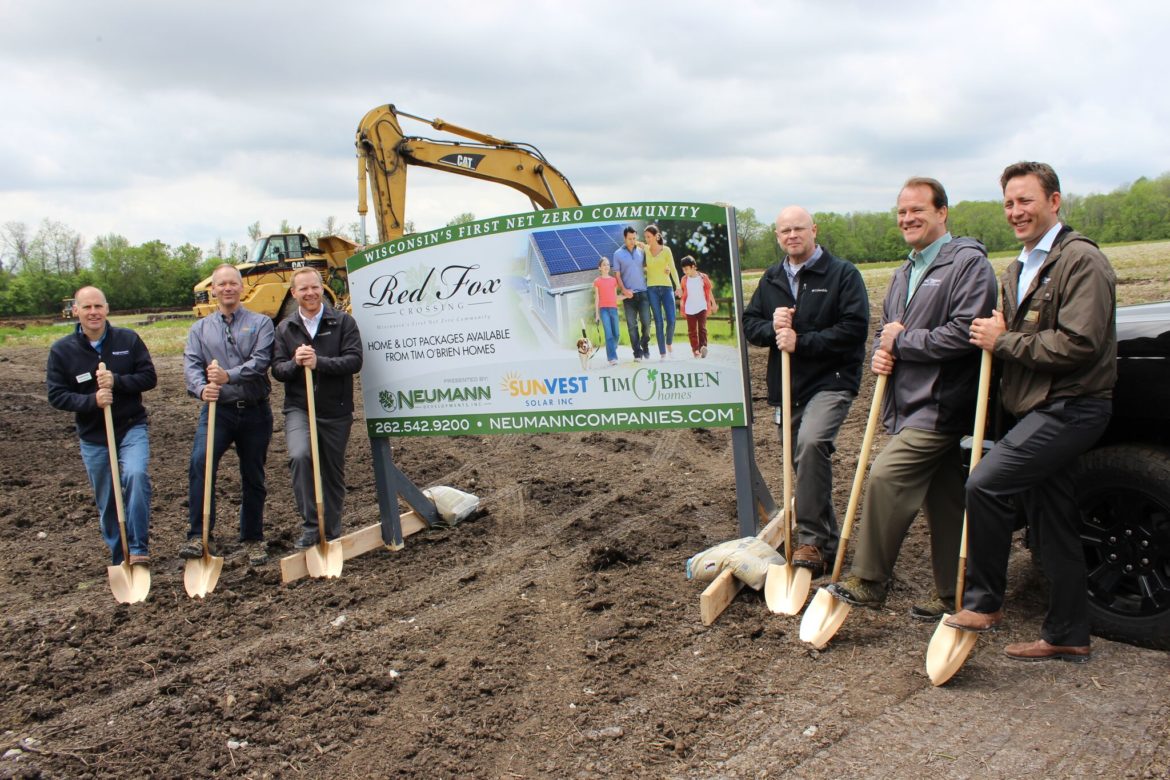 As some homeowners associations debate whether solar panels should be allowed, at a new subdivision in New Berlin, they will be mandatory.

Ground was broken in late May on Red Fox Crossing, a 34-home development where deed restrictions require solar installations, with the cost paid back through the mortgage.

The developers and other local experts said they don’t know of any similar development in the Midwest. But the quickly dropping cost of residential solar mean such arrangements could become increasingly common, especially in places like Wisconsin that have relatively high electricity prices.

Matt Neumann, CEO of the developer Neumann Companies, is confident the development will sell out and that the solar installations will be a strong selling point. After incentives are figured in, the 6-8 kW arrays will add about $15,000 to the cost of each home. The 1,900- to 2,200-square-foot homes are expected to sell for $450,000 to $650,000 each.

Neumann is the son of former Wisconsin congressman Mark Neumann, a conservative Republican who favored green solutions. Matt Neumann is a fervent advocate of solar power.

The homes he is developing will be built by Tim O’Brien Homes, and the solar installed by SunVest Solar Inc., both affiliated with Neumann Companies. The homes also will feature top-of-the-line energy efficiency measures, including advanced insulation, LED lights and efficient appliances.

Home buyers will get the benefit of several incentives for solar installations, which will help offset the price of the solar array. The Investment Tax Credit reduces a tax bill by 30 percent of the amount spent on solar with construction starting by the end of 2019, with the amount ratcheting down through 2021.

The state’s Focus on Energy program offers grants of up to $2,000 for solar installations until the program’s budget for each year runs out.

While the incentives are helpful, Neumann said that current market prices for solar equipment are making it increasingly accessible with or without them. He notes that if someone takes out a 30-year mortgage, the extra amount they pay each month for solar is barely noticeable.

Adding the cost of solar into the mortgage creates a situation for homeowners similar to PACE programs, which allow financing  for energy efficiency and solar improvements to be linked to the property and paid for over a longer time period. Wisconsin has a PACE program but Neumann noted that it is geared for industry, and “ too complicated for small residential program like this.”

Betting on solar despite politics

Wisconsin had become known in recent years as a state with regulators and politicians seemingly hostile to distributed solar, and the state Public Service Commission made headlines for approving utility rate cases that included drastically increased fixed rate increases and other provisions expected to chill solar development.

But solar has been blossoming in Wisconsin recently, thanks in part to dropping prices, investments by rural cooperatives and interest among homeowners and businesses.

“The outlook has never been brighter,” said Michael Vickerman, program and policy director of RENEW Wisconsin. He described the Red Fox Crossing development as an important success story, and also pointed to Madison’s recent commitment to become powered by all renewable energy.

Neumann said state policies and rate provisions for We Energies, the utility serving the area, were an important factor in deciding whether to do the all-solar development. While those policies and provisions are far from ideal, he said, the company concluded solar was still a good bet.

“We have a lot of good news and bad news on solar in Wisconsin,” Neumann said. “The really good news for solar, though not for ratepayers, is our energy rates are the highest in the Midwest. When energy rates are higher it makes solar more valuable. We do also have a net metering policy that works for homes, for 20 kilowatt (solar arrays), though it doesn’t work real well for businesses (with larger installations). The bad news is we don’t have clarity on whether or not we can do third party financing,” where another entity owns a solar array and the homeowner buys the power.

Neumann noted that homeowners are using such third-party arrangements in Wisconsin and the commission has approved them on an individual basis, but solar advocates have been pressing for a legal decision or other pronouncement guaranteeing the arrangements are allowed.

“It’s not statewide policy, that creates some confusion in markets,” said Neumann. “We feel pretty confident that third party financing is accessible in the state of Wisconsin, but at the same time we have no specific policy that embraces it, which becomes important for developers to come in.”

Neumann said that Neumann Companies and SunVest are considering another similar development elsewhere in Wisconsin. Meanwhile SunVest is building a 3.1 MW array in Philadelphia that will be the second-largest in the city.

SunVest national sales director Kirk Kindred said he expects dropping solar prices and growing interest in solar to spark more developments to be built with solar arrays across the Midwest.

“Now here in the Midwest, everyone’s getting on the bandwagon. I think it will become more and more the trend. People are thinking a lot differently now than maybe they were before the financial collapse in 2008. People are thinking more local, and energy independence and production goes right along with that.

“It’s a mindset where people are thinking, ‘I can have a garden and produce my own electricity’; municipalities have passed ordinances to allow chickens; when you’re thinking more about environment and community, it’s a good thing to have production on your own rooftop.”

4 thoughts on “Solar on Every Rooftop”